When I was ten, on a Mediterranean holiday with my parents, there was another guest at our hotel who liked to watch me splashing around in the pool. One turquoise afternoon, she sidled up to the family member who was supervising me and observed, “Your grandson swims like a fish.”

It’s fair to say that my mother wasn’t thrilled to be identified in this way. I didn’t witness the incident, but can imagine her choking on her Slimline, or hiding her pique behind big sunglasses and a Robert Ludlum novel. At least she had a sense of humour and relayed the detail rather than bottling it up.

At the time she was in her early forties. No one, I think, would now express surprise at a woman having her first (and only) child aged thirty-one. Yet when I was born in the seventies she was regarded as a pretty mature primigravida, and I can remember a few other episodes from my early years when strangers let my mother know—with a lack of tact I could grasp even then—that she was a little old to have a child my age.

When my daughter Athena was born last April, my wife Tess and I were past forty. I suppose there’s a Judd Apatow version of our lives in which our colossal antiquity is a source of mirth, though if it means I get to be played by Paul Rudd I can accept being the butt of a few indelicate jokes. But we don’t feel like decrepit oldsters, and when, very occasionally, someone looks at me as if to suggest I’m less spry than the average new parent I have to remind myself why this might be.

I’m yet to encounter anyone who believes that I might be Athena’s grandfather, let alone that Tess is her grandmother. But I’m aware that there are other negatives associated with having a child at a more advanced age. I like to tell myself that I’m more stable, emotionally and financially, than I was a decade ago and that I’m able to draw on a richer store of accumulated wisdom. All the same, I am conscious that one day not far into the future Athena may be embarrassed by my age—and perhaps also anxious about how long I’ll be around to embarrass her. There’s a danger that what I may choose to regard as maturity and rationality will look to her more like tiredness, remoteness and rigidity. I hope this won’t happen, but I have to be alive to the risk.

Mulling this over has prompted me to seek some pertinent figures from the Office for National Statistics. In 2017 the average age of women giving birth in the UK was thirty years and six months, whereas in 1974 it was twenty-six years and five months. 2013 was the first year in which the figure was over thirty. Of 2017’s 679,106 live births, 29,313 were to mothers over the age of forty (2,357 of them were over forty-five), and 97,448 were to fathers over forty. Of the latter, 63,952 were in my own bracket, forty to forty-four; there were 3,137 children born to fathers aged fifty-five and above. Two other intriguing details: seven mothers aged between forty and forty-four had their child with a teenage father, and there were more births to women between forty and forty-four (26,956) than there were to women under twenty (20,358).

Since gleaning this information I’ve been struggling to corral examples of art that engages with what it’s like to be an older mum or dad. I know I’ve read novels that touch on the subject. Alice McDermott and Esther Freud come to mind, but only vaguely. I try to summon up some relevant films, yet in the ones I recall the parents aren’t that elderly: Bicycle Thieves, The Shining, The Road, A Woman Under the Influence, A Separation, and, yes, Ron Howard’s 1989 film Parenthood, with that chastening line delivered by Keanu Reeves about how “You need a licence to buy a dog or drive a car—hell, you need a licence to catch a fish—but they’ll let any butt-reaming asshole be a father.”

Sometimes, in the grip of parental incompetence, this observation haunts me. So does a sentence from a memoir by Christopher Hitchens. The book’s title, Hitch-22, seems to zero in on me, and then there’s this: “To be the father of growing daughters is to understand something of what Yeats evokes with his imperishable phrase ‘terrible beauty’. Nothing can make one so happily exhilarated or so frightened: it’s a solid lesson in the limitations of self to realize that your heart is running around inside someone else’s body.”

As I transcribe these words, I think of Van Gogh’s First Steps: the child and father with arms outstretched, poised to meet in a perfect embrace, the moment and its expectations and its uncorroded possibilities frozen forever. But immediately some dark association of ideas means that it’s eclipsed in my mind by Goya’s Saturn Devouring His Son. This is Goya the self-exorcist, a master of agony and dissonance, casting out his demons by giving them shape.

A sunless minute passes, and a more sedate image presents itself: David Hockney’s My Parents, with its folding chairs and vase of fresh tulips and atmosphere of discreet, meditative, slightly bored steadiness. Again, this isn’t what I’m after: although Hockney produced the painting in 1977, when his mother and father were in their seventies, they were only in their mid-thirties when he was born.

In my mind’s gallery (admission: free, with erratic opening hours) its companion piece is Raphael Soyer’s The Artist’s Parents, a smaller oil that evokes a mood of humility, worry and weariness. The next exhibits are some of Dorothea Lange’s photographs of migrant parents during the Great Depression, rugged alongside their tousle-haired children, but these men and women aren’t old so much as careworn and weatherbeaten. After them comes Henry Ossawa Tanner’s The Thankful Poor, in which the rituals of mealtime reverence are being handed down from one generation to the next. Yet when I look again at this image of devout solemnity, it strikes me that the painting may in fact show a lesson passing across two generations, from grandfather to grandson.

“Being an older parent is, I reflect, an incentive to hold on to whatever one can of one’s youth”

I picture Lucian’s Freud’s small, late work Daughter and Father, not to be confused with the early and larger Father and Daughter. Everyone in Freud’s later paintings, whether young or old, looks doleful, hungover, flayed open by his scrutiny and the slowness of his method, his merciless left hand and its coarse hog’s-hair brush. He reviews all the evidence of his sitters’ mortality and intensifies it. I can’t spend long in the company of his canvases without thinking of decay: the bodies are cadavers, the effects of gravity inescapable. In Daughter and Father, where the older figure is implicitly the less important one, the father’s face resembles a plate of offal, the small eyes and crooked mouth about to disappear amid a jumble of rubicund meatiness that’s beginning to brown with age. It’s the face of someone who, I suspect, always looked a bit crumpled and to his daughter seemed autumnal, not vernal.

Being an older parent is, I reflect, an incentive to hold on to whatever one can of one’s youth. In fact, it creates an obligation to do so. As I type these portentous words, Athena begins to crawl my way. She has had enough of the jingling rewards of the baby gym and is squirming in the direction of my laptop’s chunky white plug—and then on, towards me. As I sweep her up into a hug, I see with renewed clarity my ten-year-old self, my red cotton trunks, my face a sunburst, the water behind me bright as foil. The day seems to unfurl, and for a moment my heart is as light as a paper boat. 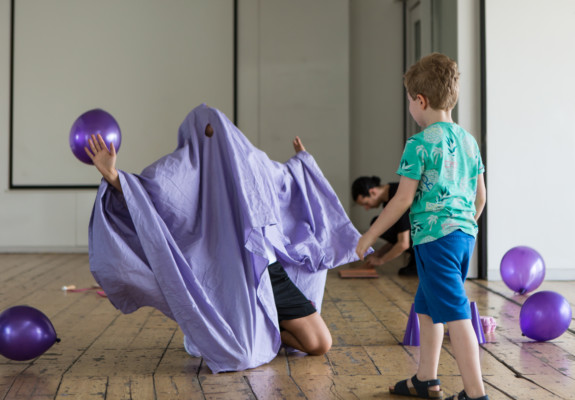 The Best Art Events in London for Under 5s

Going anywhere with a child under five can be a special kind of hell, but these tried-and-tested art activities across London will keep your tot entertained with ease.
Read More