The refrain is unmistakable: La Cucaracha, the Spanish folk song about a disabled cockroach, was popularised by Villist soldiers during the Mexican Revolution, though the original meaning of the song is unknown. The verses have been improvised ever since, depending on the politics of the performer, but the chorus has remained the same: the cockroach struggling to walk with its two hind legs missing—a metaphor, or simply a darkly humorous image of a stumbling, much-loathed pest.

For the South African artist Pieter Hugo, La Cucaracha is emblematic of Mexico’s “humour, ritual, a strong sense of community and an embrace of the inevitable”—characteristics that “make it possible to live with tragic and often unacceptable situations.” La Cucaracha was the perfect title for Hugo’s homage to Mexico—a book of photographs, portraits, landscapes and still life vignettes inspired by Mexico’s “particular ethos and aesthetic” taken during multiple trips across the country over the last two years.

“I first came to Mexico at the invitation of [the Mexican curator] Francisco Berzunza”, says Hugo, who is known for his portraits of peripheral communities. Berzunza was curating an exhibition on South African art in Oaxaca. Titled Hacer Noche the show explored the liminal space after death. “His only brief to me was that the work be about sex and mortality,” Hugo recalls.

Hugo doesn’t avoid the stereotypical images of Mexico—Frida Kahlo flower crowns, cacti, religious effigies and rancheros all appear—but when he confronts them with his camera, they don’t look the way we expect. This is a series about sex, and death—interpreted explicitly: naked flesh and blood, burning and cut-up corpses, fallen fruit and blooming flowers. Nature and humanity perform a strange and beguiling dance across the pages—La Cucaracha playing faintly in the background.

While some of these images—such as spoliation of evidence, in which a body appears to be on fire in the desert in Hermosillo—might shock the western viewer, in Mexico it’s not uncommon to see gruesome and graphic photographs of death on the front page of newspapers displayed at kiosks, juxtaposed with seductive pictures of nude models. Images of the extremes of life and death reside comfortably with the ordinary and the everyday, with little hierarchy between them. “There is a very different relationship with death here to what I am used to.” Hugo explains. “If one looks beyond the clichés of dancing skeletons and sugar skulls, there’s a deeply complicated connection with mortality. This necropolitical dynamic is most visible in contradictory expressions of honouring the afterlife, in the Day of the Dead celebrations and the brutal dismemberment of bodies by narco-traffickers.”

Hugo’s vision of Mexico also references the rich visual culture there: images such as After Siqueiros, Zapata and Adelita, and the sequence of Muxe portraits in particular, refer to its art history and culture. Hues of pinks, blues and greens throughout the photographs also create a vividly Mexican atmosphere, jubilant and feverish. “Alongside the flamboyance and high-pitched register of this series, there is the ordinariness of the everyday. I am drawn to the fabulousness of the banal and the banality of the exotic.”

The most surprising works, perhaps, are the male nudes—cowboys, politicians and labourers who have posed for Hugo without clothes. The Advocate at Home, shot in Mexico City, shows a heavy-set hirsute man draped on a sofa in a classical pose, naked but for his white socks. Vulnerable and proud, exposed and intimate, the naked advocate represents sex as much as death.  Underpinning these portraits is the pervasive sense of acceptance “that life has no glorious victory, no happy ending”—as Hugo puts it.

Although Hugo views Mexico as a foreigner, La Cucaracha is intensely emotional. Hugo finds a connection with Mexico, revealing self-reflexive truths as he attempts to understand a place that he doesn’t belong to, but nonetheless can relate to. “Given the disparate nature of my interests, I’ve always struggled to situate myself. One could say, albeit reductively, that my work has always been about the outsider—and, in the Trump era, Mexico is definitely the outsider.”

On display from 27 August to 5 October 2019 at Stevenson Cape Town, and published by Editorial RM 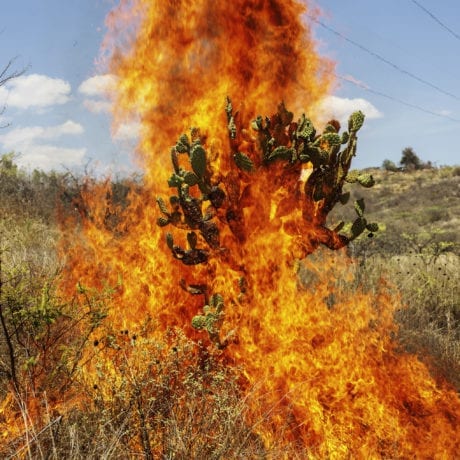