This Sundance Award-winning documentary about British vocalist/visual artist/activist MIA (aka Mathangi Arulpragasam) has been almost a lifetime in the making. A few years back, its director (and MIA’s old art school friend) Steve Loveridge quit the project, declaring that he’d “rather die than work on this”. The friends apparently reconciled, the film was finally wrapped, and the results are genuinely brilliant—a vivid, funny, moving, headstrong, occasionally shocking blast of sensations with an exhilarating soundtrack, reflecting the star at its centre, but also the worlds spinning around her.

MATANGI/MAYA/MIA begins with the artist on location in India, shooting the video for her 2016 track Borders, inspired by the current international refugee crisis. It swiftly moves between such contemporary scenes and a rich archive of footage, dating back to home videos—as a young student at Central St Martins, and further back to her childhood, newly arrived from Sri Lanka to a South London council estate. “I came to music as a medium, but the need to express myself through anything existed before,” she says.

Coincidentally, I was in the same class as Mathangi at a Wimbledon comprehensive; the biography that accompanied her musical breakthrough (with 2004 electro/dancehall soundclash Galang) is genuinely fascinating in this film, and it has never needed jazzing up. I recall she really did wear a Tamil Tigers t-shirt for PE lessons (aged twelve, us classmates assumed this was a fashionable sports team, like the Chicago Bulls). She had a natural flair for dancing and creating art and clothes, and a huge obsession with all kinds of pop; she had a schoolgirl crush on Clark Datchler from eighties smoothie pop trio Johnny Hates Jazz, and when we were fourteen she showed me a catchy song she’d scribbled in her exercise book—I told her it sounded “a bit Stock/Aitken/Waterman”. She was smart, but never a swot. She had a spiky sense of humour, but I also remember her deep-rooted respect for her Tamil heritage, for instance when she described her grandfather’s reincarnation (to note a 2013 MIA track title, YALA—You Always Live Again). She wasn’t the loudest girl at our school, but she turned out to be the brightest talent by far.

“Throughout, there is a spirited clash of the personal, the pop and the political”

While many modern music docs include a wealth of personal/behind-the-scenes footage, they also tend to be intensely filtered through the director’s vision—even with such strong subjects as Amy Winehouse in Asif Kapadia’s 2015 film, or Grace Jones in Sophie Fiennes’s Blood Light And Bami (2017). Mathangi/Maya/MIA feels like an unusually unfettered portrayal, and its scope is also exceptional. On some levels, it’s a coming-of-age doc; when we watch her family reunion with her father Arular (for whom MIA’s debut album is named), we’re jolted by the realization that this unassuming middle-aged man was also at the helm of the Tamil resistance fighters’ movement in Sri Lanka.

Throughout, there is a spirited clash of the personal, the pop and the political. As a student and aspiring filmmaker, Mathangi befriends Elastica frontwoman Justine Frischmann, and joins her indie rock band on tour at the woozy height of the Britpop movement. This clearly isn’t her scene, so she finds her own—returning to Sri Lanka to stay with relatives and developing her own multi-flavored sound as MIA.

As the film progresses, it’s striking how MIA appears coolly in her element, whether she’s creating beats with producer and former boyfriend Diplo, introducing Hollywood filmmaker Spike Jonze to young London-Nigerian rapper Afrikan Boy (who guested on her 2007 album Kala), performing at Coachella or the Grammys (just days before giving birth to her son), or chatting over snacks at Jaffna House: an excellent, unfussy Sri Lankan café on Tooting High Street, South London.

It’s also clear how impassioned she is about giving voice to broader issues, particularly when civil war horrifyingly breaks out again in Sri Lanka. We see how her nightmarish video for Born Free (directed by Romain Gavras) was inspired by the real-life killing of Tamil communities; we watch her being celebrated then patronized on US TV interviews (including a clip with smarmy Bill Maher). We also watch her impulsive streak turn hilariously off-kilter—in particular, when she incurs the wrath of the NFL for sticking her middle finger up during her live Superbowl performance with Madonna.

MIA’s story isn’t complete here—the film ends before her 2017 curation of London’s Meltdown Festival, for example—but the film keeps you gripped by what she has achieved and influenced (both musically and in her vibrant, globally-fueled visuals), and psyched for what she will deliver next. Unconventional, and definitely essential. 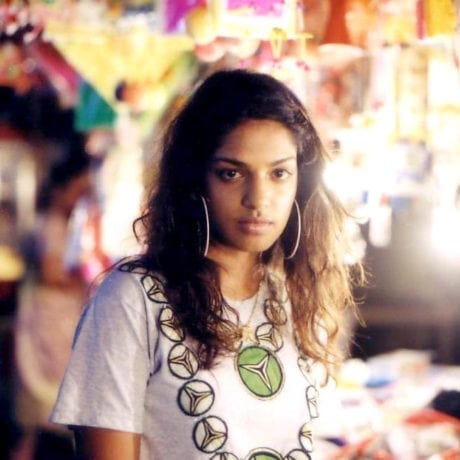