You have two exhibitions coming up. Are they quite separate or are there common threads?

The ICA show emerged as constellations of objects and I have been thinking quite pointedly about relationships between groups of works. It was a lot to think about three spaces over two floors. It’s definitely a challenge, and I’ve tried to consider the exact space I’m working with. I’d been thinking a lot about the view through the downstairs windows and that led me to think about the park. I was very distracted every time I was in there, by the bodies outside and being able to see them. Rather than engaging with the view through the windows, I thought maybe I could board them up and have this fake window, appearing as though the foliage from the park has crept right up to the surface of the glass. That got me thinking about other hermetic spaces. I happened to be reading an essay about public toilets, about the fact they don’t often a afford a view outside of themselves. The eye’s want for depth of field is often appeased through reflective surfaces. I thought I could make downstairs feel like quite a hermetic space, and make upstairs a place where the viewer is given a view outside of themselves.

I wanted to think about Southard Reid quite differently. I had this compulsion to treat it as one gesture in a way, and pick up where I left off with my previous show there two years ago (Bump) where I transformed the gallery, with a few spatial interventions, into a nightclub space for one night. I decided to think about this new show in relation to closure, because I’d been walking around Soho a lot and noticed the shutter boardings. There have been a lot of venues—especially gay ones—that have closed recently.

How did your more formal sculptural practice and your work with the gay club scene come together?

I suppose I was thinking about opportunity structures within material spaces and about how we engage with certain spaces—the role of design even and how things have an impact on the way in which we become moral subjects of those types of spaces. It was something that went in tandem. I always talk about my work as being biographical, so even though it broaches ideas about community, more often than not it’s about me as a starting point. The live practice came in a little bit later. I did a performance with Eddie Peake and that loosened me up to think about how I could expand the practice.

Bump at Southard Reid is the most recent live event, and that was really about bringing live bodies into the space and working with ideas of—what’s left behind? I lay a flesh-toned carpet down and that got dirty throughout the night. That stayed as a remnant in the exhibition.

“I always talk about my work as being biographical, so even though it broaches ideas about community, more often than not it’s about me as a starting point.”

Much of your work is recognizable for its lack of literal human forms, whereas with a live event you’re filling the space with bodies and bringing it to life.

I guess it’s about creating an empathetic association with the materials for the viewer. For example, with the paintings that I nicknamed the “sweat panels”, I really liked the idea of trying to encourage something empathetic towards the surface that you’re looking at, so that it becomes synonymous with you. In other works you might be looking at something that is a similar height to you. I’m interested in that reciprocal relationship between subjects and objects, and how we make one another. I hope that the objects flirt with the viewer. There are some things people might really want to touch that I’d rather they wouldn’t! But then there are the things you want them to interact with and that’s always tricky, trying to stage that correctly. The idea of something getting dirtied is something I’ve been thinking about a lot.

Surely the gallery space also changes the way in which people respond. Do you feel people react differently to a regular club night?

This feature originally appeared in issue 24 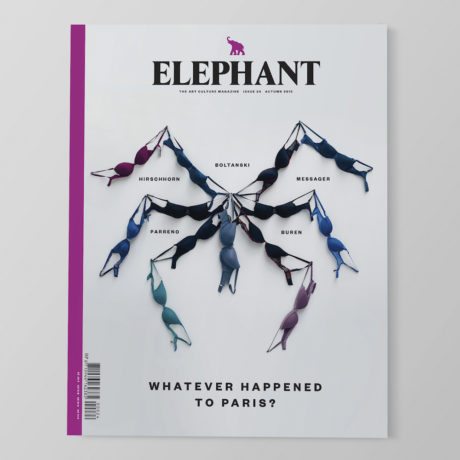