Rithika Merchant’s intricate collages are full of life, featuring bright orange suns, leaping human figures and abundant plant life. The Indian artist has a long-running interest in mythology and the universal motifs and archetypes that exist across cultures. Her recent series features feathered women in flight, drawing upon a rich history of similar mythical figures who took on many different guises yet often represented a sense of freedom and liberation.

Merchant playfully edits the stories of these women. The Peri spirits (which originate in Persian mythology), for example, were often locked in cages upon attempting to enter paradise, denied entry because of their mischievous nature. The artist depicts one Peri in a joyful dance, as she flees a scene that appears to be paradise on first glance, until the viewer notices flames ravaging its floral gardens. Here paradise isn’t all it’s cracked up to be and Merchant highlights that joy can be found outside the conventionally desired spaces.

She is currently showing at Kristin Hjellegjerde in Berlin, alongside British artist Rachel Garrard. The latter’s work is different visually: geometric forms, depicted in grey tones, using self-created pigments from Garrard’s travels around the world.

Your work draws heavily on mythology. What first interested you in exploring this area?

My interest in myths began when I read Joseph Campbell’s The Hero with a Thousand Faces. The book really opened my eyes to the universality of the human experience and how it has informed many myths.

I have always been very interested in narratives, myths and received histories, and in how these different fragments are woven together to form a complete image. Most cultures use imagery to tell stories and represent ideas. I try to use these ancient means of storytelling in a more contemporary context.

In the past, art and stories were often a way to make sense of natural phenomena and psychological events. In modern times and for the foreseeable future, science gives us a complete explanation for most things. However, it places humans as part of a greater scheme rather than at the centre of our own narrative. It takes away the spiritual power given to every human to understand their own destiny. Mythmaking brings humanity back to the centre of concern.

Rachel Garrard’s work is, visually, strikingly different to your own, yet there is a common thread in your interest in the metaphysical. How has it been to show your works alongside hers?

Rachel has described her work as dealing with the theme of higher dimensional space. I think that the unseen or higher dimensional space is where we meet. My collage works are sort of these astral landscapes, where the characters in my narrative works meet and exist. I could also see the characters in my work traversing the energy fields and the spaces in her work, as they journey through space and time. Both our works are also inspired by nature and geometry.

“My collage works are these astral landscapes, where the characters in my narrative works meet and exist”

I loved illustrated books as a child. I think they opened my eyes to how stories could be told through symbolism. Two favourites that I still look at are Grimm’s Fairy Tales illustrated by Arthur Rackham, and The Arabian Nights illustrated by René Bull. The Dark Crystal film also visually impacted me when I was little, and opened the door to thinking in a more fantastical way and not shying away from what some would consider to be a bit grotesque.

What is your favourite piece of music, and why?

I have so many, it’s hard to choose just one! Anything by Fleetwood Mac usually gives me a sense of wellbeing.

What’s the best piece of advice you’ve ever been given?

People tend to romanticise what artists do, but being an artist is a profession just like any other that requires a lot of hard work, patience, and a thick skin. It’s a massive risk, and there are constant ups and downs. You have to be very committed to it. The best piece of advice I have gotten is to just show up and work on my art every single day, even if I don’t feel like it; to constantly hone my craft, to be committed, and to make things happen for myself.

All images courtesy the artists and Kristin Hjellegjerde 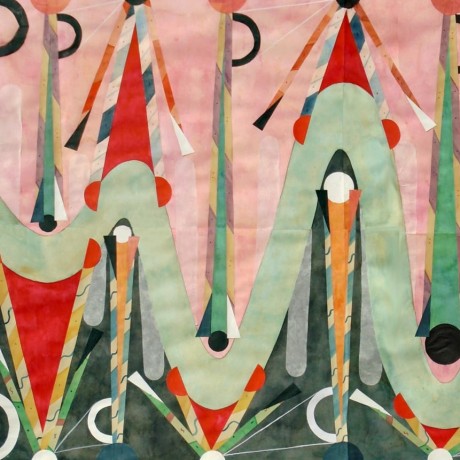