“I’ve lost my lost nostalgia about Iran”, says Shirin Neshat. We are sitting in a room at Goodman Gallery London, where her latest exhibition, Land of Dreams— her first in London in two decades—is being installed. Neshat has also just been announced as Photo London’s 2020 Master of Photography and will have a solo exhibition at Somerset House from 14 May to 21 June. Land of Dreams marks a shift in the Iranian artist’s gaze, turning her camera towards the Unites States, a country she’s lived in since the 1990s. Though her work has always dealt with the oppositions and dialectics that are a result of living in exile in a foreign land, she has never addressed her adopted country in such a direct way before.

This new body of work, comprising two video installations and a symbiotic, monumental portrait project of more than one hundred photographs (sixty of which are showing at Goodman) also comes at a time of heightened tension between her native Iran and America. Her recently closed retrospective at the Broad in LA opened as protests erupted in Iran and was running when in January the US assassinated Qasem Soleimani in Baghdad. With the threat of war boiling, Neshat’s work—which is “very much about the antagonism between the two countries”—became especially charged. She recalls visiting the Broad and seeing visitors in tears.

A prescient tilting of her lens towards the US under Trump, Land of Dreams is a complex reimagining of the myth of the American Dream, and of the social fabric of contemporary America. “I’ve decided to never make another purely ‘Iranian’ work; I’m so tired of living with this feeling of always wanting to go back. I don’t even care if I go back,” the artist reflects.

“I’ve decided to never make another purely ‘Iranian’ work; I’m so tired of living with this feeling of always wanting to go back”

She is dressed in her trademark dark colours and eyeliner, strikingly beautiful—much like the protagonists of her films, who each represent, to an extent, the artist and her personal story. Simin, the star of the two new films, Land of Dreams and The Colony, for example, is a young immigrant artist from Iran who travels the US taking portraits of locals and documenting their dreams. The film traces the exact process of Neshat herself in making her photographic document, the results of which hang in the gallery.

Neshat’s family still lives in Iran, and she explains that although her work will always address the country and its issues in some way, she will never make another work that creates “a make-believe Iran”, as she did in her acclaimed films, Rapture (1999) or Women Without Men (2009). “Talking about all these heavy political issues over the years, I learned I never want to be that direct”, Neshat explains. Land of Dreams marks a completely new direction for the artist.

Though aesthetically and conceptually connected with her previous work, moving between open landscapes and closed interior scenes, between black and white, the rational and the subconscious, the political and the personal, Land of Dreams makes the US, not Iran, the focus. It is based on both Neshat’s own encounters with the country as an artist and an immigrant, and on the new discoveries she made while creating the work about American society. The work touches on religious fanaticism, racism, poverty, and the political situation in the US, merging surrealism, satire and Neshat’s glorious cinematic vision.

During the project, Neshat traveled across New Mexico—terrain that has attracted many artists, from Agnes Martin and Judy Chicago to Georgia O’Keefe—to take portraits of Native Americans. “I was so glad to experience how they live and to understand the situation,” she reflects, saying she was left heartbroken by some of the destitution and alcoholism she saw. “The Native Americans have been sidelined, they’ve been hushed, fed with casinos and alcohol, kept away on land they don’t own; it’s disgusting what has been done”. While shooting the portraits she met people living in “heart-breaking” conditions, but who were also fighting to preserve their culture, language and heritage with “dignity and pride”.

“Sometimes I have a hard time, I feel isolated and outcast in the art world”

The portraits of Land of Dreams are printed at different scales, a deliberate inversion of power dynamics. Meanwhile in the films, we view the US through the eyes of a non-western woman, a narrative that becomes increasingly illusory from one film to the next, a portrait of a place that is absurd, fractured and fragile. It complicates the hierarchies between immigrants and non-immigrants, east and west, men and women, artist and subject, and is far the image of the omnipotent superpower America we’re used to.

In her own life, Neshat tells me, it’s the community she has created around her over the last thirty years that has enabled her to thrive in New York. “Sometimes I have a hard time, I feel isolated and outcast in the art world—but I feel happy knowing I’m going back to that.” Making this work has been an opportunity to extend beyond the life she has established in her host country and to connect more deeply with the roots she has put down in this new soil. Neshat describes this exploration of the US as being “good and bad”, eliciting anger at the situation but ultimately empathy for all the people who have come to this land to make their dreams come true. “In New York, you don’t feel it, but doing this project has opened my eyes and made me realise; I am part of this community.”

Until 28 March at Goodman Gallery, London. Photo London takes place from 14-17 May at Somerset House, London 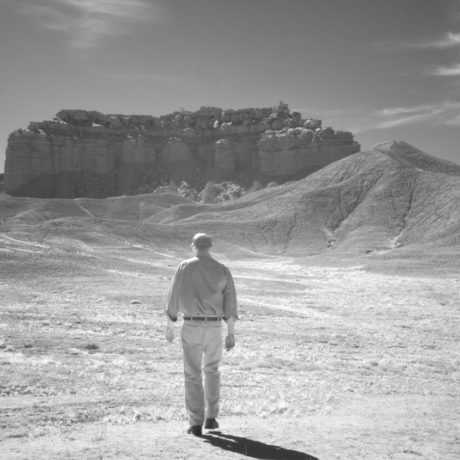