Christian Falsnaes is the kind of artist to which the term performance art doesn’t lend itself easily. Not because he does not perform, but because his performativity often illicitly directs others to perform unwittingly for him.

I first crossed paths with Falsnaes in Berlin several years ago, in a dark velvet shrouded bar called Kumpelnest, just after he had opened an exhibition at Insitu around the corner. Kumpelnest had strong links to the eighties avant garde performance scene in Berlin, including the collective Die Tödliche Doris. The heirloom sits in the heart of the red light district, and today you generally find a mixture of artists, drag queens and local queers enjoying pop classics, under the light shards of thousands of glitter balls. Kumpelnest seems an apt context in which to explore the working practice of Falsnaes. In a bar scenario it’s not unusual for one person’s adrenaline, lust and fervour to start working its way through the room, eventually becoming a contagious collective output, landing everyone on a crowded dance floor as they cackle and crack shapes to nostalgic beats. This working model of collective energy seems to be the mechanics of Falsnaes’s practice, and it’s very effective—his body exercises collective desire and movement to eventually direct a performative act in all that surrounds it.

Falsnaes’s practice within an art world context came to him quite late in life, he explains to me over Skype, as he is preparing for his solo show at PSM, which opens during Berlin Gallery Weekend. “My first encounters with art came through graffiti. I painted a lot of trains in Copenhagen and there was a group of graffiti people I hung around with. This is way before ‘street art’ was even a term, by the way. So anyway there was a group of graffiti people, I can’t mention the name they use as they are still active. But they started to work more in the public space as a performative act—or I would later see it like that, after formal training. At the time I saw it as an expanded version of graffiti. We did things like running onto subway trains and screaming at people or blocking the traffic, or heading down into the central station to paint a train in ski masks with blocked spray nozzles—its wasn’t really activism, it was something in between a happening and a performed act. This led me to Zurich to the squatting scene, and then to the DIY art scene in old factories and eventually to the Academy in Vienna.”

This mob ethos never really left Falsnaes, even after he had been worked through the art schooling system. He maintains a keen practice that involves watching and creating reactions in his observers/viewers. I say both as he has created multiple series in which both the public sphere and the institution (and its human counterparts) are used. Each time he re-addresses the frame of his landscape, but applies the same methods of collective energy. Shock tactics is definitely too harsh a term for what Falsnaes does, but one could definitely say he uses soft power play.

“For me it has always been about the reaction of the people. This is why I became so interested in performance, rather than graffiti in a traditional sense. I was drawn to the process and the direct confrontation between the surroundings and people. This originally was only in the public space, but then I became more interested in it through the exhibition. Art became a kind of laboratory for me, especially the art exhibition, because everyone comes with a very specific set of expectations and if you make people react to something, their view is tainted by this reaction too.”

These modes of reaction are often created by Falsnaes himself; he has created several works in which he has directly participated with his public to make the work spatially, often creating pseudo pop songs, paintings or absurd theatrical components that are later exhibited. I found out in his exhibition The Title Is Your Name at Bielefelder Kunstverein that he had to carry a phone around with him during opening hours, so visitors could call him and ask for a unique performative direction from the artist. A rather confused woman called Falsnaes whilst we were speaking, he directed her to tell me her opinion of the show so far. The piece was titled Available.

This level of domination in actively involving the spectators in his working process is something that does not go unnoticed by the viewer. There is always a hint of an interrupted social convention, power relation or explicit gender typing that is seen on the video documentation or live in the flesh (depending on the piece). As much as Falsnaes is not making them participate, most of his “collaborators” do seem like they are at least uncomfortable with who or what they are to him. There is not really ever a clearly defined answer to that question, as Falsnaes dissolves the parameters of the artist, stage and audience, for better or worse. This notion is perhaps easier to control in the gallery, he tells me, but now he is looking to returning to the streets.

“When you’re in the museum there is an expectation—people know they are looking at art. But on the street, they don’t know if it’s a demonstration, a crazy person…Is it some form of activism, or is it art?”

“When you’re in the museum there is an expectation—people know they are looking at art. But on the street, they don’t know if it’s a demonstration, a crazy person…Is it some form of activism, or is it art? Over the last five years, I have mostly found myself inside the exhibition performing, but I started to miss this completely uncontrollable energy that is the public space of the street. So I have decided to go again onto the street, but this time with all this experience of the analytical approach that I have developed through exhibition making.”

This brings us on to his new exhibition at PSM. Falsnaes tells me he wants to create his first re-visit to the streets in Berlin, as people have grown to expect a certain product from him here, in his “home” city. The new work also seems to be consciously critiquing this role of domination from an individual and a group perspective, perhaps something that comes up more to his participants than to him onsite. Nevertheless, to turn that in on itself is an interesting move after five years of institutional critique. The piece, in essence, looks at how a singular person and a mob of twenty-five people can change the landscape of the street, with exactly the same actions. It will be shown as a two-channel video installation.

“I’m looking into the difference between a choir and a single voice for this new piece, and how those two positions change or interrupt the urban social norm and its environment,” Falsnaes explains. This sounds like a relatively simple act, which is Falsnaes’s signature style—he uses micro gestures to blow up questions of society, behaviour, social troping and image-making. It comes at exactly the moment when our behaviour in social spaces is becoming more scrutinized than ever before, not only by the artist but by the state, the civilian and the algorithm. 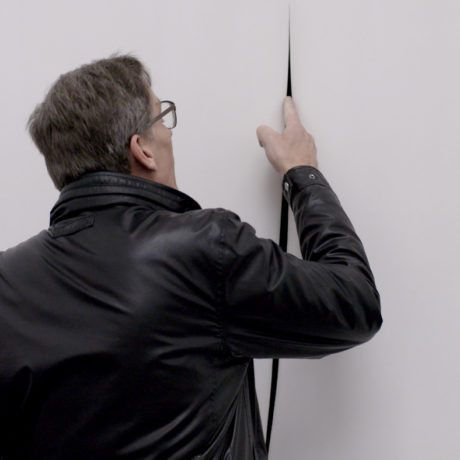