This summer one stretch of the Thames looks like it has swallowed a rainbow. A stage rises bedecked in tessellating patterns, framed in soft pink. Before it, a tiled patio has become a carpet of looping patterns in dazzling colours, surrounded by benches in matching hues. Nearby, a row of sail-like flags billow along the riverbank. And threaded throughout (when the sun breaks through) are Londoners.

This is Promise Me Memories and I Will Let You In, a public space installation on Greenwich Peninsula. It was created by British designer Yinka Ilori, who in less than a decade has become one of the most distinctive forces in British design. Recent projects have included several murals, exhibition design at Somerset House, window displays at Selfridges, a “shrine for plants” in Mayfair, a playground in Cannes, a skatepark in Lille, and a polychromatic, labyrinthine stage for the 2021 Brit Awards in collaboration with set designer Es Devlin.

With a programme of concerts, radio residences, film screenings and talks, Promise Me Memories is itself a celebration of live events. But it also evokes something of the recent past. Ilori’s patterns are organic, almost floral, reflecting a year-and-a-half in which many city dwellers spent an inordinate amount of time in parks. There is a tinge of psychedelia, speaking to this summer’s sense of freedom. Most of all, though, Promise Me Memories’ role as a gathering place stands as a corrective to months of isolation.

“I spent a year working between home and my studio in Park Royal,” Ilori recounts. “Like many of us, I’d planned holidays, experiences, memories. And they were all cut short.” Promise Me Memories was itself delayed from 2020. The pandemic taught him to seize the day: “One of the things I learnt was to make every day count, every day a memory.”

Promise Me Memories seeks to instil this ethos in others. “I want to get people to promise me that they will create memories within my situation: play and daftness, music, meeting new people,” Ilori declares.

Ilori was commissioned by Greenwich Peninsula, a 150-acre development abutting the O2 Arena. It’s an area with an unusually strong commitment to culture. It encompasses NOW Gallery at North Greenwich tube station, whose exhibitions bridge different aspects of visual and material culture. A new Design District is currently being built by a coterie of internationally acclaimed architects. Promise Me Memories sits alongside The Tide, a planned 5km (it currently runs for 1km) elevated and riverside linear park by the designers of New York’s High Line, which among other things features two colossal sculptures from Damien Hirst’s notorious 2017 exhibition Treasures from the Wreck of Unbelievable.

“I want to get people to promise me that they will create memories within my situation: play and daftness, music, meeting new people”

Promise Me Memories places Ilori’s characteristic stamp on the area. Drawing on Nigerian textiles from his family and trips to Lagos along with forms spotted in London, he often employs ostentatious, though never garish, colours and patterns. Ilori first came to attention as a furniture designer, specialising in upcycling vintage chairs into characterful, unique pieces. His first collection was funded by a £3,500 loan from the Prince’s Trust.

Afterwards, Ilori almost gave up, frustrated by the difficulty of making headway in a closed-off industry. But his 2015 exhibition If Chairs Could Talk proved a breakthrough. A set of five redesigned chairs inspired by people he knew in his childhood, it combined design ingenuity with an affinity for storytelling. Ilori has continued working with furniture, with a steady stream of chairs. Last September, he received the London Design Festival Emerging Designer Medal. And in December, he launched a homeware range, which includes ceramics, tablecloths, cushions and rugs.

“London is open. I think every street, every place, every borough in London is for everyone”

Ilori is arguably most familiar to the public, however, for a succession of outdoor installations. These began in 2019 with Happy Street, which saw him beautify a bridge and its underpass in Battersea. “It was my first public realm project on that scale, and for me it was successful,” explains Ilori. “But it was also successful because it formed a talking point for Battersea and the estate that surrounds it.” The same summer also saw Colour Palace, a garden pavilion at the Dulwich Picture Gallery co-designed with architects Pricegore, which took inspiration from the brightness and bustle of nearby Peckham’s Rye Lane.

This May, Ilori revealed Be The Best You Can Be, a basketball court with a 3D-printed floor in Canary Wharf, whose kaleidoscopic shades and patterns enliven the glass-and-steel financial district. It also aims to make the area more accessible to those intimated by its concentration of bankers and skyscrapers. “I think it’s really important to make work in places like Canary Wharf, where people feel they can’t go or don’t belong,” says the designer. “It isn’t how they should feel, because London is open, London is for everyone. I think every street, every place, every borough in London is for everyone.”

“I didn’t see a true depiction of our city being represented in design. There are incredible people of colour in art, design, fashion, music”

His works at Greenwich maintain this spirit, which stems from Ilori’s own background: “I was raised by a community: I grew up in a council estate,” he says. “So I know the power and importance of communities and of young people.” It also reflects a renewed intimacy with London. “When you can’t travel,” Ilori explains, “you have to dig deep and really understand your environment, and be inspired by the mundane things you see everyday.” His recent works have drawn in particular from the quotidian forms of the city. “I spend a lot of time,” he continues, “running, cycling, walking, driving, just pulling out my mobile phone and taking photos of a facade, or a brick wall, or a gate. And I take those elements in design then into a pattern.”

Promise Me Memories is Ilori’s third project with NOW Gallery and Greenwich Peninsula’s Cultural Projects Manager Kaia Charles. The first was Home Affairs, a collaborative exhibition of furniture and textiles in 2015. Two years later he provided furnishings for a Design Salon at the venue, discussing the industry’s continued diversity problems. “At the time, I didn’t see a true depiction of our city being represented in design,” Ilori explains. “I’m talking people of colour. There are incredible people of colour in art, design, fashion, music.” Ilori credits a growing awareness among senior individuals in the sector (as well as the righteous outrage that followed the murder of George Floyd last May) with improving the situation somewhat. “But there’s a lot of work to do.”

For Ilori, such changes are not only important to amplify the voices of today’s artists, but also for those whose lives can be improved by art’s presence. “Art can be a catalyst for change,” says Ilori. “It can help young children develop and feel part of a story, part of the fabric of a community. I’ve seen the power of art in my life. I’ve seen the power of art in my peer’s lives.” With his public realm work, Ilori transmits some of that power himself.

Yinka Ilori, Promise Me Memories and I Will Let You In 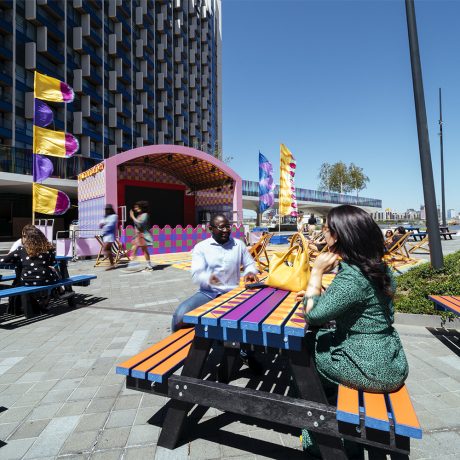