Charlotte Perriand had a reciprocal relationship with Japan. The French architect and designer was invited to Tokyo by her former colleague Junzo Sakakura and the Ministry for Commerce in 1941 to consult on a programme to modernise Japanese crafts for export. By this time, she was already a celebrated champion of European modernism in France (though Le Corbusier took most of the credit for their collaborative work).

While she succeeded in identifying possibilities for the European market, Perriand also became enthralled by Japan’s core design principles. As the Charlotte Perriand: The Modern Life exhibition at the Design Museum illustrates, she placed emphasis on sparse multipurpose interiors, the malleable capabilities of wood, and the concept of wabi-sabi, finding beauty in the imperfection of nature.

“Perriand envisaged a union of not only art, architecture and design, but a distinct blend of Franco-Japanese aesthetics”

Perriand’s subsequent vision for modern living is exemplified in this promotional shot for her 1955 exhibition Proposal for a Synthesis of the Arts, which was staged at the Takashimaya department store in Tokyo. It envisaged a union of not only art, architecture and design, but a distinct blend of Franco-Japanese aesthetics, demonstrating what Perriand referred to as the optimum “art of dwelling”.

The aspirational interiors seen here include low-level, heavily padded seating intended for prime lounging (even in a kimono), modular shelves inspired by units seen at Kyoto’s Imperial Villa, and stackable dining chairs moulded and cut from a single piece of plywood, to evoke the silhouettes formed at Japanese shadow puppet theatres. The tableware, meanwhile, resembles a traditional European dinner setting, while beyond a gigantic Le Corbusier tapestry hangs on the wall. A chic home indeed.

The Design Museum, London, until 5 September 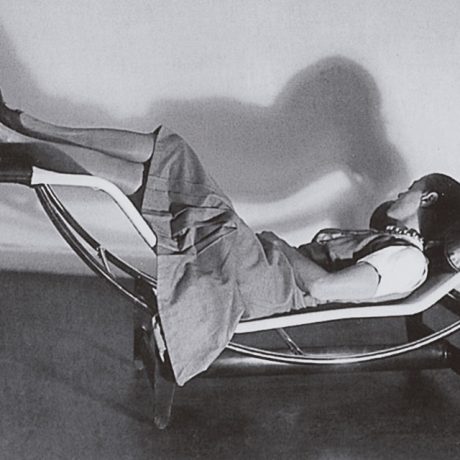