The art writer Violet Paget (1856-1935), or Vernon Lee as she was known, was a big deal in her day. Henry James called her “as dangerous and uncanny as she is intelligent, which is saying a great deal”. Edith Wharton liked her travel writing and fiction. Then she went out of fashion. Why has she remained so?

She was a feminist and pacifist, and wrote about being both. She was gay and had a decade-long relationship with Scottish art theorist Clementina Anstruther-Thomson, or Kit as she was also known, which opened her mind to new approaches to psychology and ways of looking at art. Judging by her writing—some of which has now been reissued by David Zwirner Books as part of their Ekphrasis series, while much is out of print—the lack of attention today is baffling. If you were looking for a strong precursor to the female gaze, rooted in the same traditions as many mainstream voices but written in a surprisingly modern way, it’s been waiting for you.

“Her literary approach to the subject, and therefore its lack of specialist scientific jargon, makes this an easy gift for us now”

“Psychology of an Art Writer”, the essay that begins this book of the same name, is a hybrid of memoir and theory that will feel familiar to readers of what we now call “creative nonfiction”. From describing her childhood in Italy, she charts her ambition to be a writer: how she fell under the spell of Johann Joachim Winckelmann’s aesthetics but not the Renaissance masters, preferring the “soul” Guido Reni and the Carracci brothers put into their work. She weaves reflections about art and its reception together with meditations on how her dad’s love of the outdoors might have influenced her preference for landscape. From here she interrogates ingrained standards of beauty and ugliness, trying to understand what was influenced by her studies, and what was more “spontaneous”. Art, she says, is always tinged with “association”.

This gives way to notebook entries on art made a few years after her relationship with Kit ended. One starts: “Giorgione, Moses. Why I like this picture.” “Why don’t I hate it more?” she asks of one work. The attitude of a group of statues is “an intrusion in my life”. These are threaded with observations on gallery goers as aesthetic event (“Women do better in a gallery, are more tolerable than men, because skirts and hats make them in a slight degree architectural”), the feeling of walking around Florentine cathedrals at night, her heart rate, previous loves, the impulse to act out the poses of sculptures and how breathing through the mouth or nose impacts the pleasure of looking at great art. (“Try same thing on bad pictures,” she tells herself.) They have been reframed by the writer as case studies of her state of mind, but now seem brilliantly of the moment.

At the start of this book, Lee apologizes for a “fragmentary, autobiographical” reading of her subject. But that’s what seems to be especially interesting to us now as readers. The following passages could be from Maggie Nelson’s 2009 book Bluets, which was comprised of thoughts about a previous love affair and our perception of colour: “For months, I suffered a cruel disappointment in front of the long-coveted bust of a person I’d deeply loved. I tried time and again to explain the feeling as the result of a lack of resemblance. But later on, my studies led me to understand that the bust was simply a failure from the point of view of the arrangement of its planes and the play of light across them.” Or this about a Titian: “I confess to a wish to kiss—not to touch with fingers—the Flora’s throat. The dreadful repainted flesh of the Duchess of Urbino gives me a horrid sense of touching cardboard.” Art for Lee was a matter of being up to it on the day, and to do with “variations in our mental and also our bodily condition”. In 1903, following the death of a friend, she went into the Terme museum in Rome and investigated how her depression and grief affected her appreciation of the art: “I not only did not feel, but I didn’t see ‘how beautiful they are.’” She was interested in what she called “psychological aesthetics”—a way of putting our reactions to beauty into context. But her literary approach to the subject, and therefore its lack of specialist scientific jargon, makes this an easy gift for us now.

Her views on art were scientifically forward thinking then; now they feel decidedly contemporary. She asked why works were important to her, what attracted her and what repulsed her, at a time when much criticism looked for absolute perfection; aesthetics and morality interlinked. Now she offers a subjective reading which acknowledges, between the lines, that what inherited notions tell us is most moving doesn’t have to move everyone, and that this isn’t a bad thing. “How is it that works of art that reproduce exceptionally perfect anatomical forms (and above all statues, the ones by Sansovino or Canova for example) can still seem banal and even trivial?” With reservation—as these things should never be totally decontextualized (and this one can’t)—it can be read as a paean to unconventional beauty. Lee feels “bored” by a certain sort of framed and posed “quotidian” beauty. She has a go at nymphs and Botticelli’s physically impossible beauty standards. Just as people in recent years have observed, by investigation, that Barbie dolls made real would have 40cm waists and 92cm chests, Lee says “I had an obstinate prejudice against Botticelli, because his virgins and nymphs were examples of physical types that would have been sickly and sullen had they been incarnated in real women.” Lee was influenced by Walter Pater, the Victorian art demagogue who praised the “gem-like flame” of Renaissance artists and medieval writers, but softened his supposedly elitist ideals.

“I’d have liked to have seen this book include some of her political writings, solidifying her as a figure of contemporary note”

While her writing is academic it also feels at variance with the canon. Of course, she disregards the canon with the utter confidence of a Victorian who knows the canon backwards, and has a platform. To say she was in any way populist or advocated just liking what you like wouldn’t have occurred to someone as versed as Lee. But her writings are completely immediate, and the closest thing to what our age responds to as someone of quality from that age could have produced. Still, I feel Lee has more to offer. I’d have liked to have seen this book include some of her political writings, solidifying her as a figure of contemporary note.

When it came out in 1897, her collaboration with Kit, Beauty and Ugliness, was criticized by German psychologists for being too focused on the body. I would have liked to have seen some of this unexpurgated. And though what we have here is Lee reflecting on her earlier thoughts from that book, the collaboration between her and Kit is something wholly novel: an academic and artistic collaboration between queer women at the end of a period of British history when people didn’t believe queer women existed. What a find. And what an important book for today. But then, what we are given is more subtle. Lee’s way of appreciating art, examining why you feel it but never questioning whether this feeling has value, begs to be read now.

The Psychology of an Art Writer

Out now with David Zwirner Books 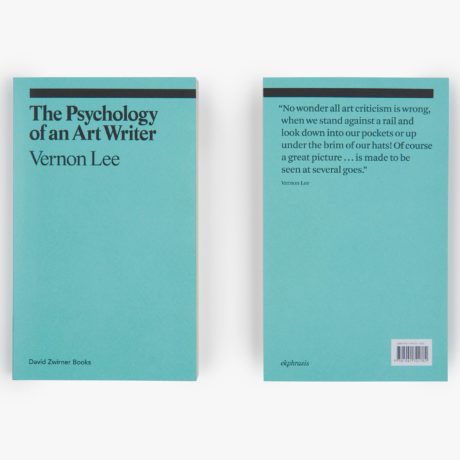