American artist, curator, author and activist Harmony Hammond was a trailblazer of the feminist art movement in the seventies, as one of the founders of New York’s A.I.R Gallery. She has continued to subvert and redefine the parameters of contemporary art for decades, with a practice that combines post-minimalist concerns with the politics of gender. She uses under-utilized, utilitarian materials including reclaimed fabric, rope and metal grommets, to bring new textural and bodily dimensions to abstraction.

You are described as an artist, scholar, author, curator and activist. Do you consider these different facets as part of an overarching artistic whole?

I consider myself to be a socially engaged artist. I teach, write, curate and participate in additional activist strategies as a visual artist who identifies as feminist and queer. Like all art, my art participates in multiple narratives: painting, sculpture, mixed-media, collage and assemblage, feminist art, queer abstraction, American painting, the “gendered body”, intolerance, voice, and censorship, to name a few.

How did you first begin to explore a subversion of abstraction by using textiles and unorthodox materials?

The subversion of abstraction comes from the materials I use. In the early seventies, feminist artists brought a gendered content to post-minimal concerns with materials and process. I and others, rejected the patriarchal and Euro-centric framework of modernism, consciously using materials, techniques and formal strategies associated with women’s traditional arts and the creative practices of non-Western cultures precisely because of their marginalized histories and associations.

Underlying this practice was the belief that materials (in my case, frequently fabric) and the ways they are manipulated and presented (ripping, weaving, stitching, wrapping, knotting, braiding, patching, etc.), contribute to content as much as form, sign or symbol. The work intentionally problematized both art/craft hierarchies and the distinctions between painting and sculpture.

Partially for financial reasons, and partly because I wanted to move away from the male-dominated site of painting, I began to use devalued materials—worn-out linens and clothing (rags) given to me by women friends, literally putting my life in my art. I painted on old blankets, curtains, sheets and bedspreads with acrylic paint which saturated the unprimed, unstretched cloth, creating a weathered, leathery effect. Ripped strips of cloth were also dipped in acrylic, then dried and stitched to the painting surface, so they hung down like three-dimensional brush strokes. As more and more painted strips were attached, their weight altered the painting rectangle.

Could you tell me a little about how you conceived Bag VI, the earliest work in your White Cube show? It is striking as it seems to be the most obviously figurative piece exhibited.

At some point, I attached strips and pieces of fabric to an old bag that was lying around and realized that the bag not only functioned as an armature or ground, but as a symbol of the gendered body. I could build on it physically and conceptually. A bag is a vessel or container of sorts. A purse. A pocketbook. Women of a certain age are called “old bags”.

This led to the series of “Bags”, including Bag VI which were hung on the wall and the slightly larger than life-sized “Presences” which hung out in space that were featured in my first solo exhibition in NYC, at A.I.R. Gallery in January 1973. The Bags and Presences were about layering, connecting and building whole forms out of accumulated fragments of repurposed materials, initiating a “survivor aesthetic” that continues to inform my work to this day. They could be touched, retouched, repaired and, like women’s lives, reconfigured.

I’ve always been more interested in “the body” (which I think of as a sociopolitical site) versus the figure (which is defined and constrained by its contours). The challenge has been to engage formal strategies and material metaphors suggesting bodies and agency.

Eventually, I returned to painting on stretched canvas, but on my own terms. In the “weave paintings”, such as Anniversary (1976), the surface looks like it is woven out of the paint, thereby bringing women’s textile arts into the modernist painting field.

“They are pieced, patched, strapped, bandaged and grommeted with flaps, frayed edges and seams showing”

Likewise, the recent materially informed paintings in this exhibition. Near-monochrome or what I do—the not quite monochrome, the becoming or unbecoming of monochrome, the disruption of monochrome, is one place content enters in. The “bandaged” and “chenille” paintings are slowly built up out of layers of thick paint, alternating with pieces of leftover canvas, burlap and other fabrics. They are pieced, patched, strapped, bandaged and grommeted with flaps, frayed edges and seams showing. Grommeted holes suggesting possibilities of connection or restraint (binding, bondage and bandaging) also suggest body orifaces and function pictorially to indicate a space below the painting surface.

Colour asserts itself through cracks and crevices, oozing out of grommeted holes, and at times bleeding into the warm white paint, suggesting both agency and voice. A rupture from underneath. A surface under stress. It’s all about material engagement.

You have mentioned bringing a “sociopolitical context into the world of abstraction” by using materials and objects. Considering the current state of the world, does this include an environmental context? I can’t help but make the association, seeing as many of your materials are found or recycled.

I don’t consciously make art about environmental issues, but the fact that I often use recycled materials is an environmental statement. Throughout the late eighties and nineties, I utilized natural materials such as straw, dry leaves, dead birds, pine needles, roots, hair and leather; human-made materials such as rusted corrugated roofing tin, linoleum, fabrics, burnt wood; objects such as water troughs, gutters, buckets, screens, tools and blinds; along with traditional art materials such as oil paint and latex rubber in mixed-media installational paintings suggesting abstract narratives of loss, violence, and survival. These tableaux-like paintings, often sat on the floor and leaned against the wall with objects placed on or in front of the painting surface—what we might call expanded painting. Inappropriate Longings is a good example.

“When A.I.R. Gallery opened […] it signalled to the New York art world, and by extension the rest of the country, that art by women could be as good as art by men and sometimes better”

Many of these paintings were about violence—small family farms lost to hard times, draught and capitalism, what was done to and by the small family farmer. Some, addressed fact that the natural environment, like the gendered body, has been violated and exploited. Over the last two decades or so, I returned to the paint itself as a carrier of meaning, incorporating fewer materials and objects. As with the paintings in this exhibition, the politics remain, but the pieces are less narrative than they used to be.

It has been decades since you co-founded A.I.R in New York, which still continues radical work to this day. Could you tell me a bit about your involvement, and why it was considered essential to launch such a space at that moment? Why is it so vital for a space like A.I.R to exist, when more conventional institutions are beginning to interrogate and hopefully upend their entrenched biases?

When A.I.R. Gallery opened on September 16, 1972 at 97 Wooster Street in SoHo, it signalled to the New York art world, and by extension the rest of the country, that art by women could be as good as art by men and sometimes better. Empowered by the Women’s Liberation Movement, women in the art world had already begun to publicly protest the lack of work by women artists and artists of colour in museum exhibitions and permanent collections, but still did not have access to the commercial gallery system.

This perpetuated the fiction that somehow art by women wasn’t “as good” as art by men and that curators and collectors weren’t interested in it. Without anyone’s permission, support or promises of funding, A.I.R., the first women’s cooperative art gallery, was founded because women could not get commercial gallery representation (the main showcase for emerging art), and decided to take things into their own hands. Tired of waiting around to be recognized by the male-dominated art establishment, we created our own networks, publications, organizations and exhibitions spaces. We formed A.I.R. so we could have a place to exhibit our work free of market constraints.

Certainly now, over forty-five years later, more women artists are included in exhibitions and are represented by galleries, however, our work is still under-represented in museum collections—a fact acknowledged by several major museums who have admitting to “mis-collecting” the seventies (meaning women and artists of colour) and are now scrambling to re-evaluate and “reimagine the story of modern and contemporary art”. Currently located in DUMBO, A.I.R. continues to thrive as a lively and still much needed exhibition space for emerging feminist artists, those needing a solo exhibition in New York as they go up for tenure in art departments across the country, and guest-curated theme-based group exhibitions.

at White Cube until 3 November 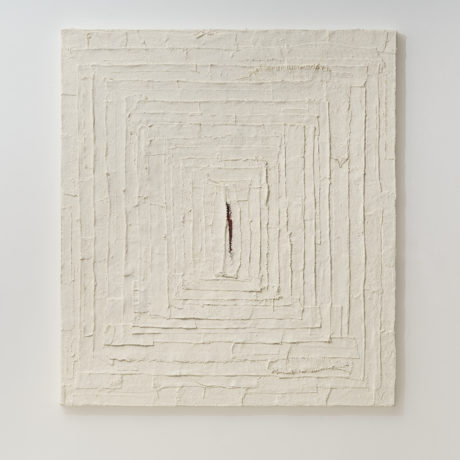