Although she’s best known as the production designer and producer of BoJack Horseman, through her comics work Lisa Hanawalt has become something of a cult hero. Her artfully drawn, frequently dark, generally hilarious panels are characterised by their distinctive use of an all-animal cast, in which universal bummers like self-doubt, loneliness, putting-your-foot-in-it, intimacy struggles and general low-level misery are played out with a profound sense of empathy and no shortage of gross-out humour.

Hanawalt has long been a favourite at Canadian comics publisher Drawn & Quarterly, which released her comics and illustration anthology My Dirty Dumb Eyes in 2013, the brilliantly surreal and hilarious Hot Dog Taste Test in 2016 and the poignant “feminist Western” Coyote Doggirl a couple of years ago. Her newest release, I Want You, sees Hanawalt return to the pre-Bojack days of her career, and draws together a number of her early comics pieces from the book’s titular comic miniseries.

“Her artfully drawn, frequently dark, generally hilarious panels are characterised by their distinctive use of an all-animal cast”

The short, snappy and always deftly sketched comics range from very helpful life advice (such as the “faux jack-off” as a handy illustrated tip for “a thing you can do while driving”); a guide to the “worst sandwiches”; no end of creatures and critters, including her signature She-Moose; short graphic stories and, in some standout sections, bonkers Buzzfeed-style listicles. Take “Bad Pets”, for instance: among them are “Tina, the bitchfish” and “kitten tied to a plate of mediocre food.”

I Want You isn’t all smut and shock, though. It’s beautiful to see the breadth of Hanawalt’s style, which always feels effortless, whether it’s her simplistic line drawing, more abstract, shape-led and painterly characterisations, or the stunningly intricate anthropomorphised animals. Another highlight includes faithfully representative but utterly surreal images of animals in various hats, including a dog with a fax machine on its head.

Whichever way she draws them, and whatever situation she uses them to illustrate, each character is laden with real emotional depth and complexity. It doesn’t take any forced willingness to suspend our disbelief when confronted with a moose who’s nervous about her appointment at what appears to be an abortion clinic.

At the core of Hanawalt’s humour is the deadpan delivery that comes with each piece’s title or proposition, and which borrows from recognisable editorial tropes: many will be familiar with the chipper, girly-girl tone of Cosmopolitan magazine’s innumerable helpful tips on things like talking dirty; very few of us are prepared for when such tips are blown up to ludicrously grotesque conclusions.

Yet somehow, rather than being simply about shock value, the absurdist approach feels compassionate; a celebration of the weirdness of being a woman. I’d wager there’s not a brain in the world that works like Hanawalt’s does.

From Lisa Hanawalt, I Want You

Published by Drawn and Quarterly 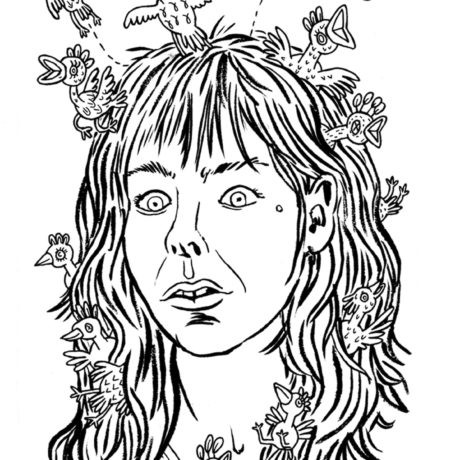