In late 2016, when the world was still coming to terms with the reality of Trump’s move into the White House (truth be told, it still hasn’t fully), American artist Mark Bradford was busy conceiving a way to subvert it. The challenge? Doing so while still representing the United States at the 57th Venice Biennale.

The resulting installation, Tomorrow Is Another Day, became a direct reflection of that paradox. Energetic but brooding, simultaneously micro and macro in scale and both public and private in format, it acquiesced to the call of the Biennale while holding its own against the Jeffersonian-style architecture of the US Pavilion: a pungent icon of traditional, white America to Bradford.

Tomorrow Is Another Day was an explosive, mixed-media installation in the US Pavilion that dealt with art, politics, alienation and blackness with a level of poetry and punch that was iconic. The first work viewers encountered in the exhibition was Spoiled Foot—a festering, tumour-like object suspended from the ceiling. Though made with found material—plywood, scraps of paper, hardware tools and whatever else nearby—it marked a massive departure from the artist’s well-known abstract paintings. Garishly red and angry, it descended upon viewers as soon as they came through the side door of the pavilion (Bradford had sealed the grandiose front doors, in front of which he had scattered detritus—the apocalyptic waste of America’s past). The side entrance to the pavilion mimicked the separate entrance of Thomas Jefferson’s slaves into the White House.

“The first work viewers encountered in the exhibition was Spoiled Foot—a festering, tumour-like object suspended from the ceiling”

Moving past the festering foot, this sense of angst momentarily calmed. A bleached paper abstract sculpture occupied the centre of the room against the backdrop of three large-scale minimalistic paintings. A depthless black-and-white landscape, formed with patterns made from dipping endpapers into a combination of paint and hair dye then stamping them onto the canvas, was a contemplative pause in the exhibition. Each painting is dedicated to a significant female figure in Bradford’s life, and named after classical sirens from Greek mythology.

The adjacent rotunda ramped up the energy of the exhibition once again: here, the artist tore away at the very foundations of the 1930s building, covering the skylight in plaster. Thick, textured ropes of bleached and painted paper in black and gold snaked up and around the peak of the building’s dome, effectively unbuilding the neoclassical structure. Simultaneously foreboding and mesmerizing (the colours invoked the visual language of danger signs, while the elaborate knots in which the paper trails are tied referenced the Middle Passage of the transatlantic slave trade), the rotunda also spoke to the instability of contemporary American politics and identity.

“Thick, textured ropes of bleached and painted paper in black and gold snaked up and around the peak of the building’s dome, effectively unbuilding the neoclassical structure”

In the final room waited Niagara (2005): an old video work that features a friend of Bradford strutting down Central Los Angeles. Although the looped video lasts only a few minutes, it has been slowed down to create a sense of dilated time. The protagonist saunters down a garbage-ridden street (calling to mind the piles of detritus outside the building in Venice and fissuring the two worlds), an ambiguous buoyancy in his step. He wears bright yellow shorts along with a white tank-top that’s matched by sports socks pulled up to his calves. His arms swing to and fro as he makes his way down the abandoned street with a swagger, but the video cuts out before he fully recedes from the camera’s view. Trapped in a cycle of endless slow progress, punctuated by bursts of running—From what? To where?—the piece encapsulates the personal and national conflict and the moments of optimism dispersed throughout the exhibition.

Elsewhere in Venice, Tomorrow Is Another Day continued—as it will for the next five years. Mark Bradford used his time in the art world spotlight to shine attention on a long-term project he has launched to fund a prison cooperative in Venice that helps its inmates develop job skills. During the Biennale, Rio Terà dei Pensieri was established as a market stall where handcrafted good were sold to raise funding for the cooperative. Bradford considers this initiative to be an integral part of his project in Venice. Beyond his eloquent response to the politics of America, the resilient optimism underscoring Tomorrow Is Another Day took on a literal meaning, extending past the short timeframe of the art event to fortify the future of precarious lives in Venice. 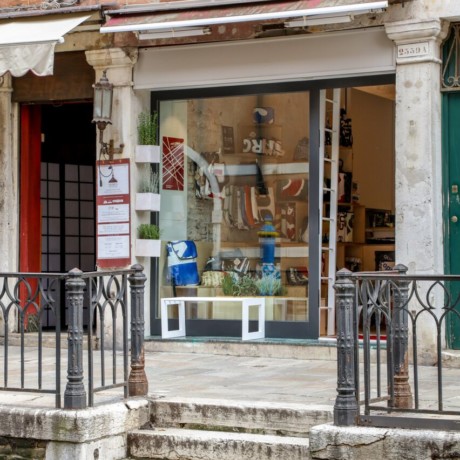