Theatre companies don’t come much more exciting than Breach Theatre. The Warwick-born group exploded onto the scene in Edinburgh in 2015 with The Beanfield, a multimedia retelling of the 1985 police crackdown on Stonehenge Free Festival. A series of intricate, intelligently-devised shows followed, earning Breach a slew of fringe awards and an ever-growing reputation as theatre makers able to combine thoughtful staging and documentary techniques to mine the past for present relevance.

It’s True, It’s True, It’s True is perhaps their boldest show to date, a brutally sparse, verbatim-style, three-person reenactment of the seventeenth-century trial of Italian artist Agostino Tassi for the rape of his pupil and fellow Baroque painter Artemisia Gentileschi. It was one of the most discussed shows at this year’s Edinburgh Fringe, and should be welcomed with similar acclaim during its four-week run at Euston’s New Diorama Theatre.

Devised by the company and directed by Breach cofounder Billy Barrett, It’s True, It’s True, It’s True is an electrifying piece of theatre. On Luke W Robson’s bleached grey studio set, the three suited performers—Kathryn Bond, Ellice Stevens and Harriet Webb—rotate around a trio of wooden benches, which variously act as docks, witness boxes and judge’s benches. Against pounding interspersions of heavy metal music, they recreate the 1612 trial, interrogating Tassi, Gentileschi and various others. Powerful images abound: not least the sight of Gentileschi’s torture, which the court forced her to undergo to prove the veracity of her testimony against Tassi. The thumbscrews she actually endured are represented effectively here with a bucket of golden paint into which she plunges her hands, screaming.

“Gentileschi emerges as an everywoman, accustomed to enduring objectification and assault, forever in the knowledge that the justice system is rigged in her rapist’s favour”

The show is, first and foremost, remarkable for its relevance. The past is re-examined in light of the present, and is revealed as a chilling echo of contemporary events. In Harriet Webb’s swaggering performance, Tassi emerges as a prototypical example of toxic masculinity, as the spiritual ancestor of Brett Kavanaugh, blustering, blubbing and bullying his way through increasingly iron-clad accusations. In Stevens’s subdued, almost wearied performance, Gentileschi emerges as an everywoman, accustomed to enduring objectification and assault, forever in the knowledge that the justice system is rigged in her rapist’s favour. In a squeamish, gut-twisting way, this is deeply, deeply shocking stuff.

But this show’s canvas encompasses far more than current affairs. In two exuberant, live recreations of two of Gentileschi’s own paintings, Breach also take a sweeping stab at renaissance art’s misogynist attitude towards women as a whole. With glee, the show recreates Gentileschi’s 1610 depiction of Susanna and the Elders, with Stevens’s naked Gentileschi insistently pointing out the realism of her version—Susanna shying from her rapists, head turned away in horror—versus the absurdly alluring versions of say, Tintoretto or Veronese.

And in the play’s closing moments, Gentileschi stages her own depiction of Judith’s decapitation of Holofernes, another classical scene she would go on to cover many times, emphasizing the blood-and-guts viscerality of her version, the vengeful anger pouring forth from the paint. She literally attacks the patriarchy with a great, big sword.

At New Diorama Theatre until 10 November 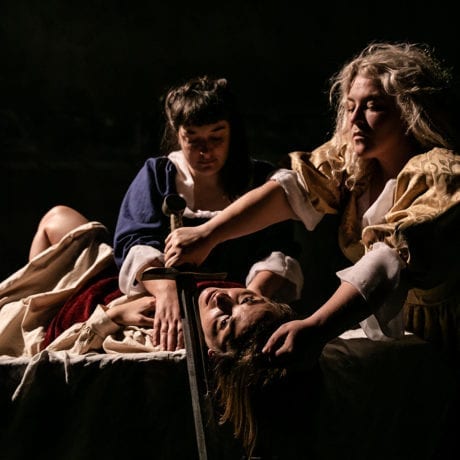