Within these images I focused on different visual strands of working. You’re presented with figures and foliage, and I wanted to create a sense of having to look within but also beyond. It’s about the exotic, and how to extend this from my own experience of this to the viewer. I was interested in the exoticism of foliage, far-flung spaces and animals, and what lies beyond that in a historical displacement of damage and destruction as a result of human exploration.

It also relates to my own narrative as a photographer—I studied in Japan for a semester last year, and I was very aware of what I’d been consciously ingesting in literature, narrative, film, icon and more before I went. I began to unpick that, and try to understand how to expand on this photographically. All of these images are taken there and then, none of it is staged. It’s about spending time in places with groups and with people, to then truncate or capture a feeling of frustration, control or containment. This is through either looking beyond or looking close, both micro and macro, and then stepping back from that and returning to different visual strands and strategies of working.

The image of a tarpaulin and two hands gripping and holding it, you can see the shadow of a human figure behind, but it’s about the crumpling of the material and how that relates to its presentation on the birch plywood plinths that I made. I knew quite early on that I wanted to mimic these spaces that I was finding myself in, like a pathway that you would have to follow. I began thinking a lot about what information we’re presented with in these contexts, such as the Eden Project in Cornwall, where nature is presented as an exhibition, and how that dictates our experience it. 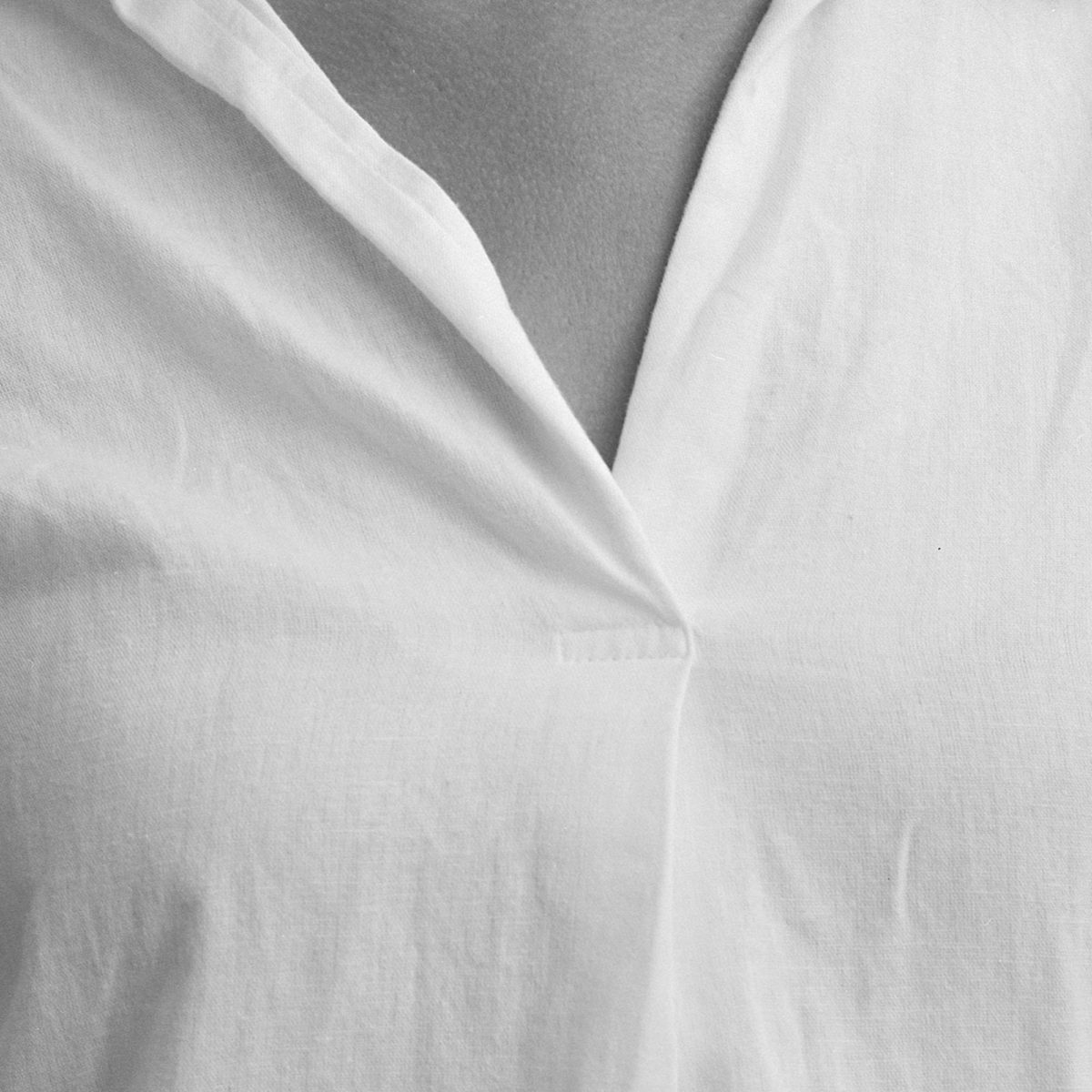 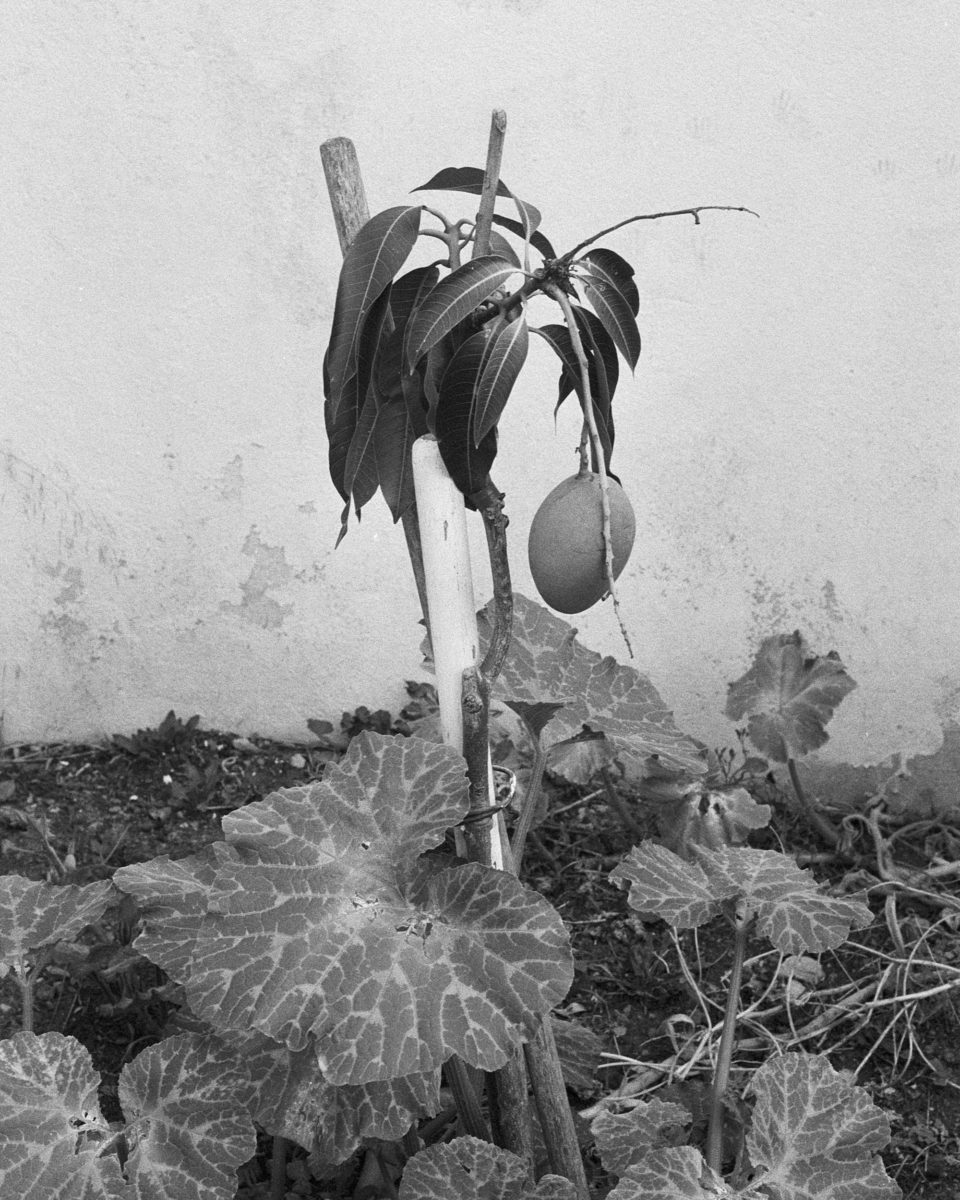 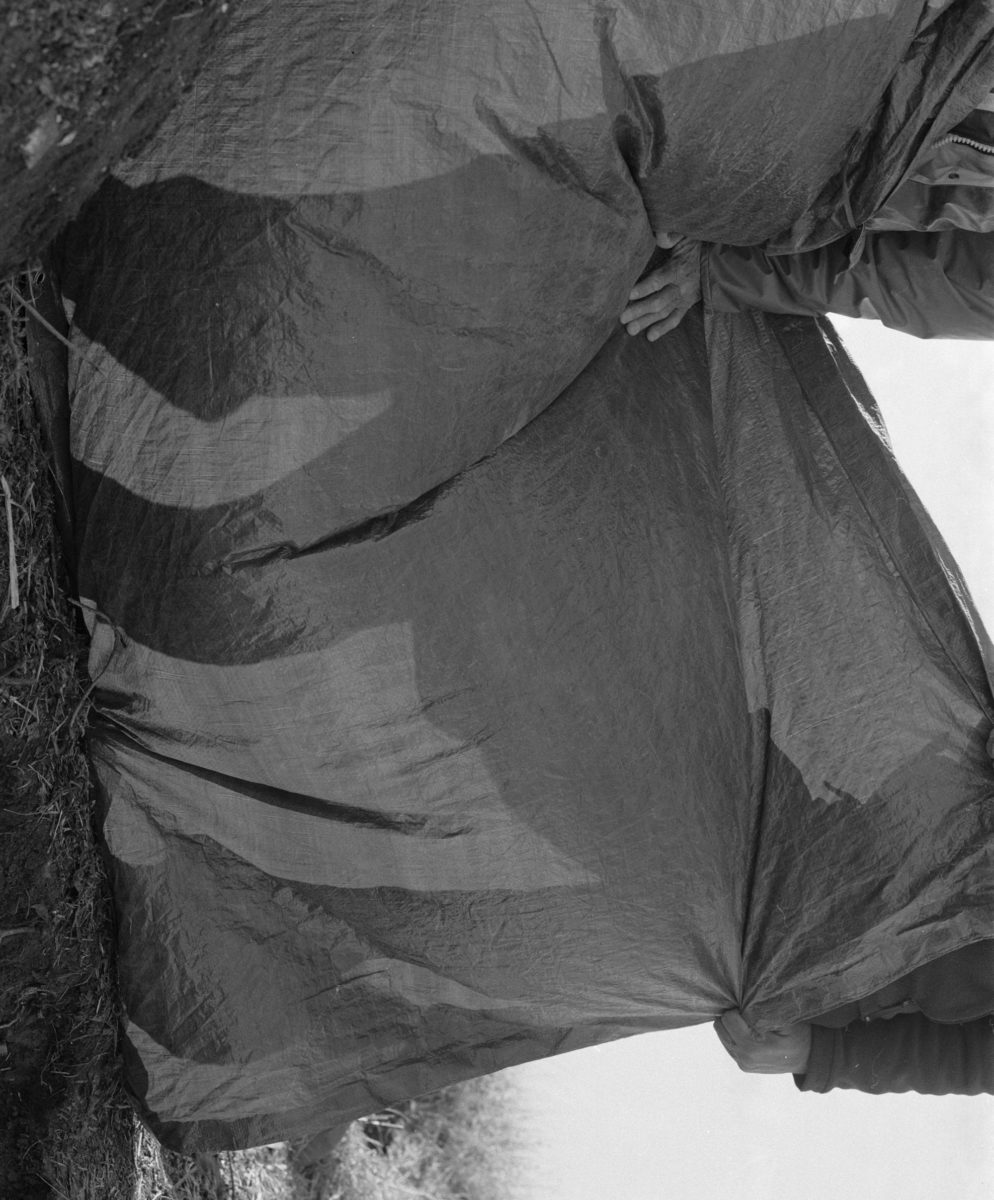 Really consider where you’re going to find yourself, and where you think would be the best space in which to develop. What do you want to see when you spend your time walking to and from university; what is around in terms of art and music? But also structurally in the course itself: is there a studio space, and will there be a chance to form a close community around yourself? Also, what element of professional practice is available on the course? It’s so important to not just remain in your single artist-led practice ,but to be aware of institutions and spaces where you can collaborate, and which offer a place to work outside of just yourself. Look outward.

“Be aware of spaces where you can collaborate. Look outward”

My project is called Fragments of a River, and it’s a series of images shot on the shore of the River Thames. I created compositions out of objects that I would find on the shore that day, reimagining the narratives behind the objects. I was thinking about how the landscape can speak of the humans that inhabit it. It speaks of the Anthropocene, the theory that humans have introduced a new geological era, and of how our presence is visible in the landscape.

The compositions were quite intuitive. I started by looking at artists such as Fischli and Weiss and Lorenzo Vitturi, thinking about how they managed to create something new out of a discarded or banal object. I was also thinking of the relationship between photography and sculpture itself, and how they interlink. I also looked at seventeenth century painting, particularly the memento mori still lifes that express the limited lifespan of worldly pleasures.

The compositions are captured in a moment of balance; when you look at them there is this anticipation of collapse, that tension. This was a reference to their temporary nature. I created and shot them on the shore of the river itself, and then let the river wash them away afterwards.

Work hard. I put everything into my project; it’s what you make out of the opportunities that you get. I was really lucky to attend a university with darkroom facilities and tutors that I admire. Research and experimentation is really important, and so is failure. Probably eighty per-cent of these images were really failure. Throughout the years, I failed a lot when experimenting, but my advice would be to analyse or evaluate your failure, and see how you can make it better. Don’t give up; just keep shooting.

“Research and experimentation is really important, and so is failure”

My project centres around the everyday. Throughout the last year, I became increasingly interested in my immediate surroundings. Previously I mainly shot places that I didn’t understand, but then I became interested in looking at my childhood home. I was thinking about how to make something that is so familiar into something that I don’t understand. I wanted to see if I could remove or alter one single thing in a photograph, and how that can change the image into something more mysterious.

I spent a few days going around my home and just observing things. I noticed, in the garden,  how I could change one thing and it would become quite strange. An image of my mum gardening would become odd if she just laid down on the ground, or an image of my dad would be different if he leaned over the fence. The project was partly inspired by a book that accompanied an exhibition at Hayward Gallery called The Epic and the Everyday. I also loved the recent Joanna Piotrowska exhibition at the Tate Britain.

Originally I started my project in colour, but when I started using black and white, it altered that direct representation of what’s in front of you and made it a bit less understandable. In my research I was looking at family photos, and I really loved looking back at Gerhard Richter’s photo paintings, where he uses black and white to play with this mix of photography and painting. I was interested in this space between the two. These black and white images are seemingly straightforward, but they can become strange. 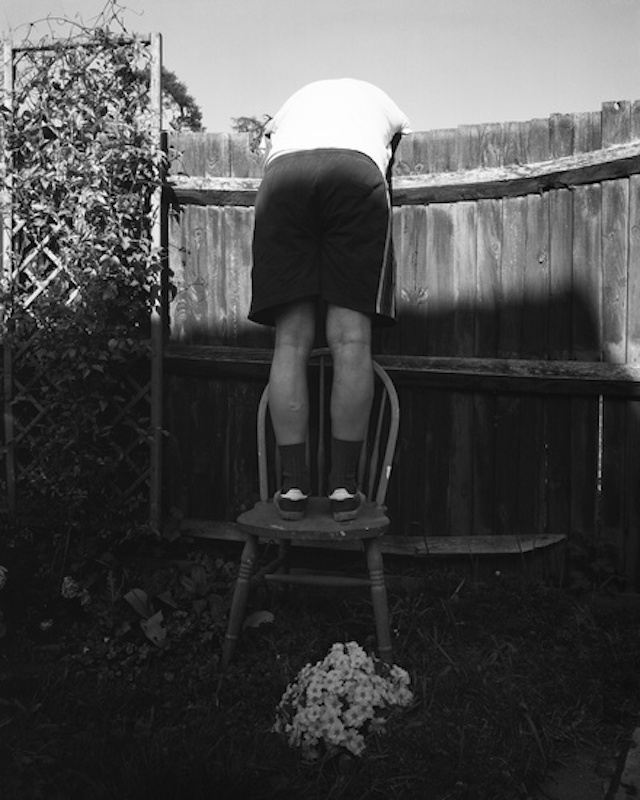 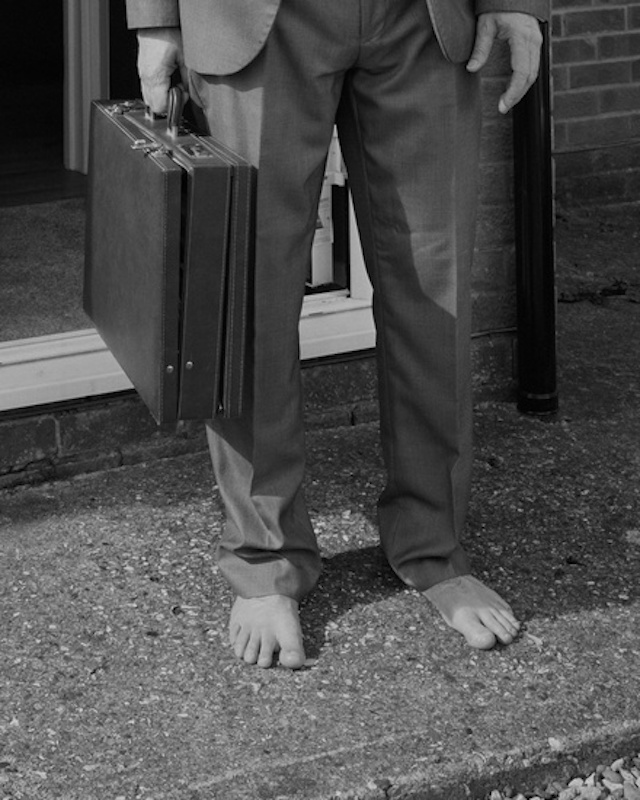 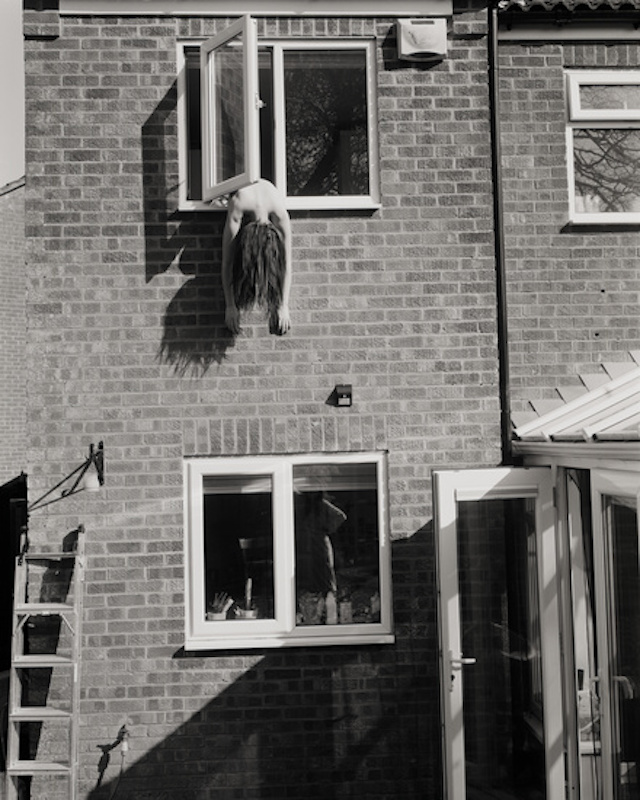 My advice would be to not stress about whether you’re making the work that you’re happy with. It was only in the final six months of studying that I really felt I was making work that I was happy with. Before that, I was so stressed about whether it was good or not, rather than just enjoying the process of making and experimenting.

“Just enjoy the process of making and experimenting”

My project is about masculinity. I started it in order to evaluate my own masculinity, and it grew into an exploration of feelings of isolation, which many men feel they can’t talk about. So I wanted to show the backs of people’s heads—it’s as if they haven’t got a face or a voice, in a way. As it’s such a broad subject, I struggled to establish the aesthetic, which is why there are lots of different sizes and formats, combining studio portraits with landscapes. I wanted it to be quite fragmented. It’s a challenge to talk about the subject of masculinity, and I wanted to lead by example. I was also evaluating myself as a straight white male, and as an existentialist. A book that had a big influence on me and this project was influenced me was Bell Hooks, The Will to Change.

I wanted to make it quite anonymous, so I didn’t attach a particular time and place to the pictures. I didn’t want you to know who it is in the picture, or where the landscape was taken, because then it would become about them and I wanted to keep to the theme itself. There’s this one picture of meat, which I paired with a picture of my torso. It was symbolic of the fact that eating meat is still seen as a masculine thing. There’s a big gender difference in vegans, something like eighty per-cent women, twenty per-cent men.

Whenever I start any project, I need to be passionate about it and have a real question that I want to answer. The landscapes that I made were the questions, and the studio portraits were the answers. It was very personal. I was thinking about all of the privileges that I’ve received, and even so it’s hard to see myself as a winner. In the nineties we had this crisis of masculinity, and I think men started to be put under pressure a bit more. It was so abrupt, and men had to adjust from what they had been doing for millennia. They were asking, what is a man? What is our identity?

Do things that you’re passionate about, and not just because of their aesthetic. More than anything, it should be about the story. It needs a purpose; fiction in search of truth is very powerful. Read a lot. I think that if your work isn’t good enough, it’s because you’re not reading enough. You gain a greater awareness, and it’s not just about practice.

“Do things that you’re passionate about. Fiction in search of truth is very powerful”

At the Truman Brewery until 8 July