“Never Far From Colour” is a pretty accurate summation of the goings-on at Art Cologne. The statement has been emblazoned in multi-coloured neon by Maurizio Nannucci courtesy of Galerie Nikolaus Ruzicska, and is befitting of a fair filled with statement pieces that scream out in a variety of fluorescent flashes and bold primaries. It is a relative kaleidoscope on the two lower levels, where blue chip galleries such as Sprüth Magers and Hauser and Wirth combat the monochrome furnishings (designed to remove any distractions and focus your eye on the work, according to fair director Daniel Hug) with highly pigmented specimens from Thomas Scheibitz (in the former) and Larry Bell, Mary Heilmann and Takesada Matsutani (in the latter).

Pearl Lam Galleries have filled their enormous stand with Zhu Jinshi’s expressive, thick impasto acrylic works and Kwang Young Chun’s exceptionally dense sculptural forms that are created using a traditional Korean technique inspired by his childhood. Formed from mulberry paper, these beautiful clusters seem drenched in history as well as impossibly bright pigments. Some of his freestanding three-dimensional forms are also found suspended from the ceiling at Beck Eggeling, on the lower ground floor.

Some booths have used colour to present a sense of overall cohesion, as in the case of Seis + Höke, which features bright orange flooring and a russet wall divider to bring together a beautiful selection of sculpture from Claudia Wieser and a candy-coloured abstract canvas from Federico Herrero. Even Marcel Dzama, who is usually known for a clamorous scramble of shades, presents a muted black-and-brown drawing that marries perfectly with the dark hue on which it is hung. His piece depicts two figures in polka dot shrouds, surrounded by the statement “Political to Poetical.”

In a similar vein, Ben Brown Fine Arts appears to have the most ardently political booth of the fair. Ewol Eriku’s graphic images use classic Black Power symbols, including a panther silkscreened onto the US flag in How That Make You Feel? and several brutal images of a woman attacking a bloated police officer depicted as a pig. It is presented opposite some stunning mixed media works by Hank Willis Thomas, who has stitched together fabric from football jerseys as a comment on the colonial legacy of European football teams and the appropriation of artists such as Picasso and Matisse, who were fascinated by African tribal objects.

One of the more unexpected themes that has emerged from the established gallery sector is a preoccupation with hair, something that had already caught my eye at the nearby Museum Ludwig, where Haegue Yang presents mop-top sculptures as part of her retrospective. The most startling example at Art Cologne comes from Dale Frank, who is exhibiting with Melbourne-based gallery Neon Parc. He has erected an enormous wall of long wigs, arranged in black, brunette and peroxide blonde sections.

The presence of the faux partings and tumbling waves create a bizarre texture that is more than slightly grotesque, though there is something deeply satisfying about seeing these colours so beautifully segmented. Elsewhere, hair is employed in a more haphazard fashion. Galeria Lange + Pult shows Sylvie Fleury’s kitsch piece formed from glittery, canary yellow fur, as well as a sculpture had from Velcro rollers and hairpins. Meanwhile Zsófia Keresztes, exhibited by Hungarian gallery Erika Deák, presents creepy self-portraiture in her strangely organic, fleshy three-dimensional mosaic. Strands of straggly blue hair protrude from these strange shapes, as if a naturalistic image of a figure has melted away in some horrible accident.

“On the upper floor the slick, honed styling of international super-sellers gives way to the Neumarkt, where younger galleries exhibit in a more industrial environment”

Morbid impressions continue with Jan van Oost’s terrifying Donna Nera. Giorgio Persano has made the most of its corner location by placing this hyper realistic sculpture of a woman crouching on the floor, with her long black mane pulled out in front of her. There’s an undoubtable sense that she is a witch, and she will surely give a few inattentive fair visitors a nasty fright.

On the upper floor the slick, honed styling of international super-sellers gives way to the Neumarkt, where younger galleries exhibit in a more industrial environment (there’s a palpable difference between the plush carpet below and the uneven black flooring found here). Some of the most exciting presentations come from the collaboration section, where different spaces from around the world join together. Isabella Bortolozzi and Galerie Fons Welters are one of the stars, with the former showing some gigantic canvases by Juliette Blightman. It takes a moment to realise that her subtle, muted brushwork actually depicts a gigantic phallus––a nice shocking start to the upper floor. She is paired with Olga Balema, whose strangely suggestive mixed-media pieces feature slits carved into foam and vinyl pads, which are printed in a variety of mock crocodile skins in far from realistic, sugary colours.

Elsewhere, there are some striking issues of destruction brought to the fore. Galerie Gisela Clement is showing a single piece by Max Frisinger called Falling Sleeves. This ambitious installation features pieces of melted plastic chutes (the sorts used for rubble on building sites) which have been suspended via a complex web of wires. The distorted objects have taken on a painterly quality as they fold and reform in globules of colour.

Bianca Bondi also uses forms of degeneration in her eerie vitrines. Gallery 22,48 m², from Paris is showing a collection of these crystallized tableaus, which are formed by dipping found objects in copper sulphate and leaving them for up to a year. These organic forms change colour and form over time (she has confessed that she is a conservator’s worst nightmare) and create beautiful fusions that look like something akin to submerged treasure. She is also showing a selection of latex jackets that have been treated so that they decay over time. Each one has a woman’s name, in an effort to raise the often-conspicuous lack of female representation on the gallery circuit. Bondi explains that her practice involves a labour-intensive process of chemical baths and inhospitable odours, and when I suggest that an unknowing guest might find her studio terrifying she replies, “Yes, they’d probably think I’m a witch.” I see another theme emerging… 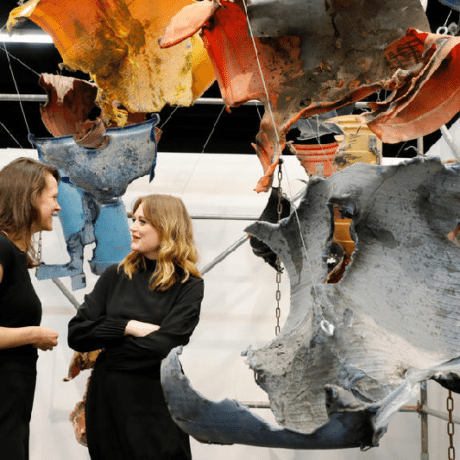