“Humour is kind of natural to us,” says Alvaro Urbano. “It’s a very good doorway into our work; then complexities arise.” The Madrid-born artist lives and works in Berlin with his partner, Petrit Halilaj, who grew up between Kosovo and Italy. While both maintain individual practices, they have collaborated regularly over the years on expansive, aesthetically stunning installations which tackle subjects such as the balance of architecture and nature, love, and tolerance, often viewed through the intimate lens of their own relationship. They regularly play with humour and tenderness, creating accessible works which enable multiple entry points.

Currently, Halilaj and Urbano are showing an installation of vast, painted fabric flower sculptures in three spaces around Europe: in Rome for the Gucci-supported Art Quadriennale 2020, titled FUORI; at the Reina Sofia Museum of Contemporary Art in Madrid; and at Berghain in Berlin, the legendary club where the artists first met. Each flower is symbolic of a different moment in their relationship, and each space holds a special significance as well. They specifically wanted to bring the flowers to Rome’s Palazzo delle Esposizioni to resonate with the Fascist history of the building, which was used to house The Augustan Exhibition of Romanità in the 1930s.

“This is a show about desire; including voices that were hidden historically”

“The flowers offer a very unique contrast between the history of the building and the Fascist architecture,” Halilaj tells me, when I speak to the lively pair via Skype. During our conversation they sit in their Berlin studio, against a backdrop of abundant plant life. The work hangs on the main staircase of the Palazzo delle Esposizioni, “in between the floors, so outside of the expected. This is a show about desire; including voices that were hidden historically. Italy has had a very complicated society, and still not all of us have a place. We thought such a presence would be good.”

The exhibition brings together the work of 43 artists who each have a connection with Italy, spanning the 1960s to the present day. The show is “a celebration of non-conformity… a vision for change, an invitation to dream, a call for diversity, and recognition of the variety of forms of expression”, which chimes with Gucci creative director Alessandro Michele’s vision. The brand’s sponsorship has enabled free entry for all visitors: “following on the heels of the Covid-19 healthcare and economic emergency, and in a nod to the vital role played by artists and creativity.”

Urbano and Halilaj’s piece uses the artists’ relationship as a means to discuss love and acceptance on a wider scale. “We made around 25 flowers in total, and all of them are related to some event in our relationship,” says Urbano. “We have been together for nine years, and there is the first flower I gave to Petrit, the first flower I gave to his mum… In the work, it’s more about that gesture of caring and the art of giving than just our relationship.”

I wonder if they see their work as verging upon activism. “It’s the beginnings of activism. And, of course, we love tension as well, and friction,” says Urbano. “There is activist research and background to the work, and it has meaning behind it, but I also totally trust the power of presence, and the experience people have encountering the work, and this chance to build through fiction to move the reality forwards,” adds Halilaj.

“In Kosovo right now they are redoing the civil code, which means they are reshaping the fundamental constitution and human rights of Kosovo. The constitution was made after the war, and this one, if allowed, is so inclusive, even more so than Germany. But the local laws of the municipalities are very traditional. So some activists wrote and said how amazing it would be if the flowers could go to Kosovo and be some meaningful presence at a time when we need public discussion. And it’s important that as artists we define this path.”

Early on, Halilaj tells me, the pair made a zine about sex for the magazine Kosovo 2.0. They agreed to create the zine, if it could be slipped inside the magazine, “like a parasite”, as if by mistake. “These layers of hiding, or one thing appearing in something else, it’s kind of like soft activism,” he says. For the launch, the artists “wanted to do a party, and a pop up gay bar for one day. It became a huge national thing: we were talking about sex, in a 90 percent Muslim community.”

“We have a chance to give form to feelings, to this fragile side of life; to give shape to caring”

The artists were overwhelmed by the reaction. “In the beginning it was very traumatic,” Halilaj says. “People came to destroy the place of presentation, the police came, we left surrounded by this glass protection. The flowers are different: you are present to this gesture; we learned through experience that this way is so much more inclusive, and it has a lot of layers. My mum doesn’t think the flowers are only queer, while activists in Kosovo see them as a queer gesture. It’s much more open how they communicate to people, which I am very attracted to.”

Both artists tell me that they have enjoyed the slower speed of this year, and seeing seasons from beginning to end in Berlin, rather than being caught up on the art world treadmill, jetting around the world. They have been collaborating even more than usual, and have made changes in their personal lives as well. “Because of this year being more fragile, it’s also the first year we liberated our birds,” Halilaj tells me. “We just thought, it’s not right to keep birds inside your home. Now we hang food outside, so birds come for a moment to have some food and then leave. We can accept having less control, and sharing the space. It is a chance for us to really understand nature. We should be optimistic about how much we can adapt and learn as humans, but it has to go in the right direction.”

Birds have featured heavily in their work before, often as a symbol of the natural world and our treatment of it, and of topics such as acceptance and freedom. During their residency at Villa Romana in Florence in 2014, the artists created For the Birds, a 90-metre suspended mesh tube which connected their studio and living space across a park. The mammoth outdoor structure enabled their birds to fly between the two buildings. “This is also a metaphor of self-extension and connection,” says Halilaj. “I see that coming from our families and cultures: there is a difficulty in acceptance, integration and openness. I feel through what we do now, we have a chance to give form to feelings, to this fragile side of life; to give shape to caring.”

Recently, they showed another bird-themed work at the Biennale Gherdëina 7 in Northern Italy. “We made a series of wooden birdhouses, which have the sound of someone snoring inside,” says Urbano. “We were sneaking in at night and recording each other’s snores. When you’re in the city, you just hear these snores. It’s very funny, and it’s this super intimate gesture of snoring in bed. It’s as if there is a bird snoring inside.”

“It’s the beginnings of activism. And, of course, we love tension as well, and friction”

Both artists say they are very optimistic by nature, and that art has provided a space to explore their own identities and find their voice. “There are certain worlds, like the art world, that have the privilege to navigate the unknown; these huge questions that are so far from reality,” Halilaj says. “I could sense this when I was eighteen and I came to Europe for the first time. I wasn’t declared as homosexual and I just didn’t even know where to start when it came to personal freedom and how to not lose people who are very dear to you. I think art fills these gaps. And that’s what we should fight for: the voices of artists who are independent from the useless rumours and pollution that comes from the market. It is so important to give precious time to important questions.” 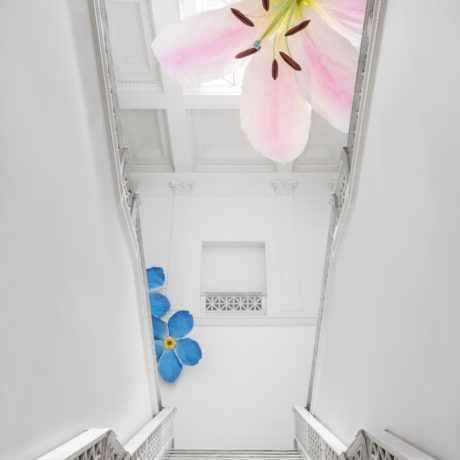