Towards the end of rock mockumentary This Is Spinal Tap, two members of the band fantasize about their “next big thing”, a musical about Jack the Ripper called Saucy Jack (“Saucy Jack, he’s a naughty one / Saucy Jack, he’s a haughty one…”). More recently, the romantic hit La La Land reinforced the escapist appeal of the Hollywood musical by creating a heightened, enchanted, glamorous reality reminiscent of Stanley Donen’s 1957 Funny Face or Mark Sandrich’s 1935 Top Hat.

Why, then, do we have an impulse to make horror sing? Not only is there a strong tradition of cult horror musicals—from The Rocky Horror Picture Show to The Little Shop of Horrors—but fright films have often been adapted for the stage as musicals: Carrie, The Exorcist, American Psycho and The Silence of the Lambs.

Alternative Christmas treat Anna and the Apocalypse, directed by John McPhail, needs no adaptation: it is a ready-made horror musical mash-up. Set in a generic Scottish dead-end town, it follows the plight of plucky sixth-former Anna (Ella Hunt), her classmates and her family, as they battle a zombie pandemic. The film has a charming indie flavour that cuts resolutely through Yuletide syrupiness with gory cartoonish violence (there are severed heads rolling amidst the balls at the bowling arcade). “Christmas is fast becoming my least favourite c-word,” declares Anna, between bouts of skewering the undead with a giant candy cane.

The film is likeable, and only time will tell whether it has the potential to become a cult hit, but it unfortunately falls short of unleashing its full horror-musical powers. One problem is that it overtly references another, far superior horror movie: the non-musical Edgar Wright’s 2004 Shaun of the Dead. Another issue, perhaps tied to the first, is that the film’s songs simply aren’t good enough.

What Anna and the Apocalypse lacks is a clear identity in terms of genre. Shaun of the Dead is a comedy in every aspect, down to Simon Pegg’s subtly choreographed clown-like physical acting. Meanwhile, the former attempts gamely to be a coming-of-age drama, a comedy and an indie musical, with songs that aren’t distinctive enough to fuse all of this together, and, crucially, the characters are too sketchily written to infuse their musical performances with any persuasive meaning.

In order to work its magic, the horror musical needs to be profoundly knowing and wily. It isn’t enough, as the characters in Anna and the Apocalypse tell each other, to have seen a few zombie movies in order to “know what to do”. The film is, sadly, a wasted opportunity: its intersection of teenage, horror and song, which channels a hormonal suggestion of ancient witchy powers, could have yielded extraordinary results. One need only think of “Once More, with Feeling”, the musical episode of Joss Whedon’s TV series Buffy the Vampire Slayer, in which the musical numbers performed by the characters reveal their hidden motives and anxieties, dynamically casting a new light on the whole drama.

One of the spectacular tricks a film’s song can play is allowing the characters’ subconscious to “speak out”. Though this isn’t, of course, restricted to the horror genre. In cult French film director Alain Resnais’s film On Connaît la Chanson (Same Old Song, 1997), the characters break into unexpected snatches of French pop songs, with highly comical or poignant effect, when they express deeply buried thoughts and desires.

“In the context of horror, telling the story through musical drama obeys a dual impulse”

In the context of horror, telling the story through musical drama obeys a dual impulse. As in Stephen Sondheim’s Sweeney Todd, the Demon Barber of Fleet Street, the musical element helps to create a more immersive nightmare world, such is the visceral power of a great score. Yet at the same time, songs are a way of taming and stalling horror, at least temporarily. A musical number interrupts the direct spectacle and gives us a moment to brace ourselves for the next onslaught.

However, it isn’t always a way of denying the inevitable. With no little perversity, Lars Von Trier exploited this idea with devastating grand-guignol effect at the end of 2000 musical drama Dancer in the Dark, forcing us to watch his heroine on the gallows, unable to finish her swan song while in the throes of death. After all, when it comes to horror, there is nothing more terrifying than silence.

Anna and the Apocalypse

Out now in selected theatres 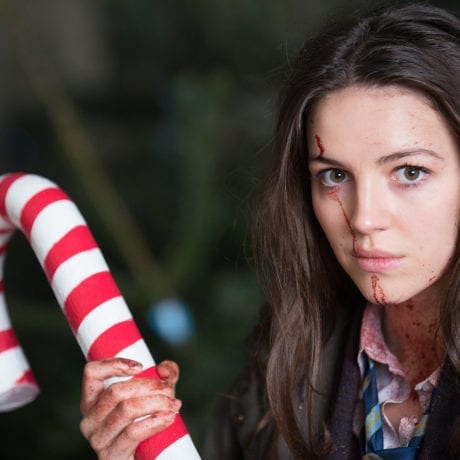