Cult American filmmaker Sara Driver’s latest feature comes after a long lull: her last picture, the supernatural When Pigs Fly, dates from 1993. Yet a strong thread links one work to the other: Boom for Real is a documentary about the early career of artist Jean-Michel Basquiat, composed of archive footage and interviews with those who knew him. But it feels every bit as much of a ghost story as Driver’s 1993 film, which starred Marianne Faithfull as a revenant.

“Though Basquiat is discussed from the off, to begin with he is only glimpsed, shadow-like”

A runaway teenager staying at “sleazed-out hotels”, Basquiat emerged as part of the punk art scene in the late 1970s, at a time of remarkable cross-fertilization between African-American culture, urban culture and the art world, in a bankrupt and deserted New York City. Driver sets the scene with shots of a swinging demolition ball, before having her contributors reminisce about the close-knit life they shared in the Lower East Side, discovering and influencing each other’s creativity at parties and on the street.

They include film director Jim Jarmusch (also her partner), graffiti artist Al Diaz and embryologist Alexis Adler, who lived with Basquiat and whose treasure trove of his early work was the first inspiration for the film. Though Basquiat is discussed from the off, to begin with he is only glimpsed, shadow-like, leaving a jagged line on a wall like a spectral mark of his passage.

The teenage artist first made his mark through his distinctive and “almost alien” conceptual and poetic graffiti art, partly because he so often had no place to live. The streets and sometimes the walls and ceilings of friends’ apartments, or a girlfriend’s gold lamé coat, served as his canvases. Driver’s film captures the moment before Basquiat’s big break, not unlike a Marvel Comics episode that retraces the origins of a super-hero before his or her transformation.

At this moment he was still only “a gadfly to the art world”, making art to the tune of the music he loved— futuristic free jazz and bebop played at blistering speed—in the face of the staid gallery world. In keeping with the punk DIY aesthetic, Basquiat let his art be itself: crude and childlike, achieved at speed, full of drips: “Anything could be brought up from the street and take on a life of its own in the hands of Jean,” says a friend. In the course of the film, as Basquiat’s art blossoms, so his physical presence at hangouts like CBGB and art openings becomes more insistent and magnetic. Once you’d met him, recalls Jarmusch, “he was indelible”.

In cinemas from 22 June 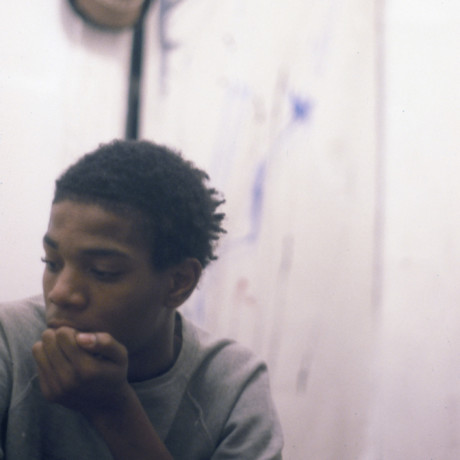