A vacant shopping mall might not be the most obvious place to find a contemporary art space—especially when it is embedded in a luxurious hotel complex, complete with water fountains and fastidious security checks—but you will find such a thing at Gallery 1957 in Accra. The Ghanaian gallery’s original site is found on the ground floor of the Kempinski Hotel, but I’m here to traverse over to the other side of the courtyard to the under-construction shopping centre. Here, beyond a deserted Versace Collection store (very Prada Marfa) I find myself in an ultramarine space filled with visions of swimming figures, both on paper and on video, where vignettes akin to portholes reveal footage of kicking, submerged legs.

This strange blue land has been conceived by Modupeola Fadugba, a Nigerian-based artist who has just spent a summer residency at the International Studio and Curatorial Program in New York. During her time there she met the Harlem Honeys and Bears, an all-black senior citizen synchronized swimming group, who welcomed her to come and observe their practice (after some considerable municipal red tape). Fadugba had already spent ample time exploring the conceptual and sociopolitical significance of black identity and swimming, but this new introduction soon refocused her work to centre around the characters and life stories of the Honeys and Bears.

This shift from abstract notions to individual personalities is visible in her paintings. The earlier works have a lighter touch, with soft pencil marks and a pastel palette. Female figures are mostly devoid of facial features, and those that do cannot be placed. They come across as slightly generic, and the overall impression is of something that has no anchor in reality. By contrast, the Honey and Bears works are bolder and more assertive, and most importantly the bodies are undoubtedly those of real people. Fadugba stresses that she wanted to truly convey the spirit of the swimmers she depicted, which led to more concentrated figurative representations. She didn’t want her subjects to feel like they had no connection to the work she was producing, and she was fairly nervous when it came to revealing her paintings to them.

“A woman swims through bizarre metallic and blood-red liquids”

Fadugba also introduces a shockingly bold red, coupled with an ongoing love of gold accents, in two works, including a showstopper triptych. In this trio, a woman swims through bizarre metallic and blood-red liquids, while in the other standalone painting a pair of women converse on the edge of the pool, their golden bodies clad in black swimsuits. The texture of the shadowy metallics makes it appear as if these elderly ladies have been enshrined in precious metal, and the scarlet accents found in the swim cap, manicure and lipstick are defiantly glamorous.

These two works are undoubtedly the strongest. They do not utilize Fadugba’s preoccupation in burning and manipulating paper which, while conceptually rooted in her experiences of witnessing the remnants of conflict, often comes across as more distracting than helpful for conveying the intangible qualities of moving water. This pair are also presented unframed, and there is something aesthetically appealing about seeing them hung flush against the dense blue walls, the effect of which becomes lost in other instances where the palette is broken up by thick ridges of black framing.

All in all, the design elements of the exhibition lift the entire show. An electric blue platform, complete with two staircases, gives a nod to the architecture of a municipal pool without being too heavy-handed, and the inclusion of five video works, consisting of Fadugba’s own research footage, as well as an audio soundtrack, hammer home the deft skills for which synchronized swimmers are celebrated.

Fadugba’s accompanying documentary is also compelling. The footage is presented in a reading area (complete with sun lounger, naturally) where visitors are invited to peruse texts by the likes of Yaa Gyasi and Jeff Wiltse, before watching a film that tells not only the history of the Harlem Honeys and Bears, but Fadugba’s own relationship with the swimmers. It is a fascinating story that infuses concerns around support networks for senior citizens and the politics around black culture and swimming, as well as the constant regeneration and gentrification of New York City. Fadugba’s own experience working in education, engineering and economics before embarking on her art practice also informs her insights on broader issues, which prove that this documentary is far more than a behind the scenes bonus.

The success of this film and the additional printed stills (which are unfortunately reproduced and mounted in a lacklustre fashion) demonstrate the power of context, because the story of the Honeys and Bears is the real lifeblood of this show. By utilizing carefully situated video pieces among the works on paper, there is a sense of cohesion and three-dimensionality that couldn’t be achieved with the static pieces alone. This strong vein of storytelling will hopefully be something that Fadugba continues to explore, because the compelling narrative she has woven with the swimmers is what really stands out.

It is also worth noting that this blue room is strangely welcoming. The subliminal effects of the echoing pool soundtrack are soothing, and the vibrant colours are more akin to a children’s play area than a gallery. For anyone who spent their youth splashing about at the local leisure centre, there will be nostalgia abound. The result is a space that might feel more open to the general public than your average commercial gallery (where even a hardened journalist can feel nervous when crossing the threshold), especially as the “reading” area really does encourage people to sit, relax and examine the source material. For those who do make the pilgrimage to this unusual location, there is a real opportunity to dive in. 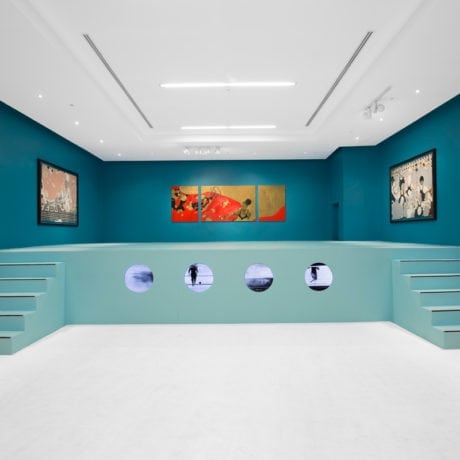