Haley Morris-Cafiero is unequivocal when I ask her if the art world has a problem with overweight people. “I think the entire world has a problem with weight,” she tells me. “I think obesity is still considered an acceptable form of discrimination. I feel like I have to work harder and be smarter than everyone else because I am an overweight woman over the age of thirty-five. I have colleagues who are conventionally attractive who get away with being vapid and are chased by opportunities.”

It serves as an important reminder that no matter how much we’re sold the idea of “diversity” in visual culture, reality still follows the same old standard, favourable to those who fall on the right side of accepted. Morris-Cafiero isn’t new to this. She’s been dealing with bullies her whole life. In the past she survived by avoiding them, but when her photo project, Wait Watchers, went viral in 2013, she experienced a whole new world of hatred in the form of cyberbullying.

“When I made Wait Watchers, I didn’t think about it going online and being seen by so many people. I made it for the art space and never imagined that it would go viral. I wasn’t surprised that people were critical, but that they would waste their time to criticize me.” Morris-Cafiero recalls. “While I knew that people used the internet as a weapon against others, I didn’t realize that it would be at the scale of thousands.”

In Wait Watchers, Morris-Cafiero documents the reactions to her body in different public spaces across America—she eats an ice-cream on the street, she strolls to the beach. She captures the sneers, sideways glances, glares and guffaws of strangers towards her presence on camera. The part-performance, part-documentary work exploded online—for the next year and half, dealing with the media response turned into a full-time job for Morris-Cafiero, who is a photography professor in Memphis. However, once the project started to circulate to millions worldwide, Morris-Cafiero experienced an avalanche of abuse online judging her body and her image.

It took two years for Morris-Cafiero to decide how to follow up on Wait Watchers. Her response was to come up with The Bully Pullpit, a series in which she created images based on the profiles of her cyberbullies. It’s a riotous affair, featuring Morris-Cafiero dressed in costumes. The shocking comments the trolls left are incorporated into the portraits in ingenious ways: “The major problem is that she’s disgusting”, is printed onto the t-shirt of one character; “You’re fat and gross your arms make me want to puke” is written onto a steamy mirror. The male character is dressed in a towel, a fake six-pack and nose strapped on. Morris-Cafiero uses a theatre of the absurd and humour to make her tricky subjects approachable, in the same way she uses photography as a universally relatable language. But she also deploys it as “a weapon as people do not like to be laughed at.”

Tate curator Emma Lewis, who will be in conversation with the artist at her current exhibition at TJ Boulting on March 5, observes the fact that Morris-Cafiero seeming to have such a good time by mocking her trolls must have infuriated them. “I enjoy creating all of my projects. I couldn’t imagine doing the project if I didn’t enjoy it,” Morris-Cafiero agrees. “It was fun finding the props from the bully’s profile photos. It was like a scavenger hunt.” What the trolls might have made of the images they now feature in, however, she isn’t sure. “I will not send them their images because I want them to find themselves by scrolling and then react.”

“It was fun finding the props from the bully’s profile photos. It was like a scavenger hunt”

In her most recent work, Morris-Cafiero has turned her attention to her experiences of discrimination in the art world. She’s created a series of new photographs for her solo exhibition at TJ Boulting that satirise her experiences with The Photographer, The Photo Editor and The Gallerist. “People with power in the art world control what is seen and not seen. It is this power that protects the powerful from the repercussions of their inappropriate words and actions. The perceived power of these people kept me from calling them out on their inappropriate statements and I have regretted it ever since.”

Reacting to things she’s been told, (such as “no-one wants to buy pictures of fat people”) Morris-Cafiero began the new works that reveal just how deep the discrimination goes, in an industry that postures behind a rhetoric of open-mindedness and diversity. “For the show at TJ Boulting, I have responded to three archetypes of art world power by costuming myself like them and putting their comments in the photo, like what I did in The Bully Pulpit.” It’s the sweetest revenge—framing the art world snobs instead as the object of ridicule and shame.

Morris-Cafiero herself doesn’t stagnate in the negativity too much, though. Her next project, she hopes, will “work with people who experienced a positive “life-changing moment” after seeing the Wait Watchers images. I want to travel to some of the people who emailed me with positive comments and collaborate with them on an image.” 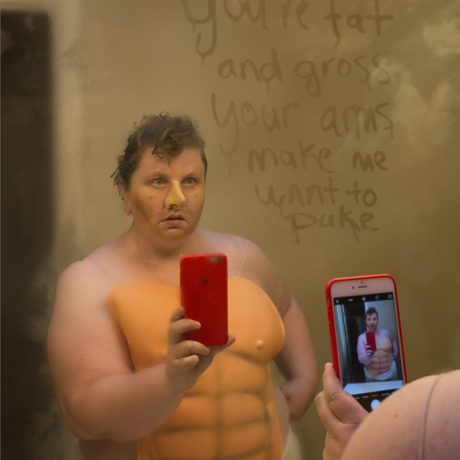