Who is the world’s most famous cat? For many, the answer is Hello Kitty, the cartoon character who, despite claims from her creator Sanrio that that she is in fact a young British girl, is a cultural phenomenon that exemplifies a much broader Japanese obsession with felines.

Land of the Rising Cat, a new book by Manami Okazaki, examines the country’s long-time interest in our four-legged friends, from their presence in Edo period woodblock prints and Kabuki advertising to the religious rituals in both Shinto and Buddhist practices, right up to the modern-day phenomenon of “nekonomics”.

This term derives from the Japanese word for cat (“neko”), and was coined by Professor Katsuhiro Miyamoto, to identify a recent boom in cat ownership thanks to socioeconomic factors such as single person households. It also refers to the proliferation of cat-themed creations that has infected everything from manga and cosplay to celebrity personalities such as the Nameneko punk rock kittens (they’ve been going for decades), Maro the food connoisseur, and Nekozushi, the sushi-cat hybrids conceived by Kouki Tange, becoming a world-wide sensation.

While on first glance this book might seem like nothing more than a kawaii extravaganza, Okazaki has gone to great lengths to get to the root of why Japan loves cats so much. She speaks to various experts on the subject, whether they be academics, artisans or locals, so much of the book works as an interview-cum-destination guide for those seeking out the moggies.

“Cats are compassionate towards us, and sensitive… This kind of relationship might suit contemporary times”

For example, she travels to various temples and shrines including Unrinji, where Jisei Sumida, a Buddhist priest explains, “Cats are compassionate towards us, and sensitive. They come close when we read. When we are angry, they maintain their distance. This kind of relationship might suit contemporary times.”

Okazaki also goes to great lengths to unpick the nuances of various depictions. For example, she decodes the famous manekineko “lucky cat”, explaining that various colours provide different kinds of good fortune, and discusses the nuanced shapes, designs and motifs of kokeshi dolls that are distinct to particular areas that specialize in artisan craft.

She also explores the huge tourist pull that the mere sight of a cat can bring when they assume mascot form. Tama the Kishi station master completely reinvigorated visitor numbers to the rural area, with over 3,000 people attending her funeral after years of “service”, and Love and Peach, the employed duo at Ashinomaki Onsen station, have had a similar effect.

The huge draw of these living, breathing pets is further demonstrated in a section titled “real cats”, where the dedication of various humans is evident in everything from architect-designed cat houses to entire islands overrun by a feline population, who are fed, watered and cared for by locals who rely on crowdfunding and tourism to survive. This level of commitment—putting the needs of these animals before their own—demonstrates the deep the love for these creatures, which goes far beyond simple aesthetic value.

Land of the Rising Cat by Manami Okazaki 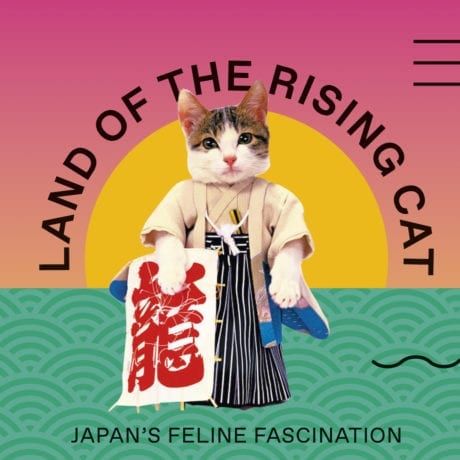