Known for her use of traditional Korean shamanistic imagery in her paintings and sculptures, Hyon Gyon’s artworks explore the intensity of personal and universal human emotion. The result of a lifelong fascination with melting textiles, her multimedia paintings and sculptures frequently involve taking a soldering iron to satin fabrics; a cycle of destruction and creation which imitates life. An itinerant nomad, Hyon Gyon has lived and shown her artworks all around the world.

Can you tell me a little about your upcoming show at Parasol unit?

Along with previous works that I made in Japan and New York, I will be showing some new pieces, which I worked on while I was living in Zamość, a small Polish town where my husband was born and raised. Living there, I got to meet lots of new people and was introduced to new artistic techniques.

My new pieces include a wooden sculpture and a mosaic. Two other pieces I am presenting are six-metre-long pieces of work using lime mortar sgraffito, which was very new to me. One art conservator taught and helped me to make the surface using lime mortar. Once it was prepared, I asked people to leave me alone in the studio, and I started to express myself on the wall, scraping out the surface before it got hard. I had to use my whole body, as well as hammers, knives, forks, nails and other sharp objects, scraping, hitting, spearing and breaking it. The whole process was time-consuming because it took quite a few days to prepare the surface. But the lime mortar dries out so fast and once it dries out it is really hard to work on it.

I felt the whole process was quite similar to my life itself. I was born, raised and protected in my parents’ care, sheltered from the world. I was then thrown into the world where I had to fight, but I ended up giving up and realizing that I’m powerless. Then I suddenly experienced catharsis in front of a hard wall, even while feeling that it was too much for me. I felt two things; one was nirvana that I reached by giving up and letting go of the feeling of helplessness in my life and in society, and the other was pride in myself that I have at least lived my life with no regrets or shame.

You’ve previously included your mother in a series of works, shown in Cruel World in 2017. Do you always look to include a personal aspect in your painting, and how do you decide which parts of your life to share?

My mother is the most strong and beautiful human in the world, she would always stand up for me and make sacrifices for me. That particular painting definitely has a personal aspect. While I was working on it, I was thinking about my own mother and her life, but I was also thinking about “mother” as a symbolic word, that could have many different meanings according to different people’s interpretations. I find that many of my works which can be seen as autobiographical actually have a wider connection to the society that I belong to, because within our lives, these things inevitably affect each other.

It is not always my direct intention to include aspects of my personal life in my paintings, but living as a human, a daughter, an artist, a hybrid of figures, I believe the feelings I get from living my life are both intensely private and intensely universal at the same time.

You’ve spoken about the influence of Paulo Coelho on your work—how are you inspired by his writing?

I made a few works called 11 Minutes which is the title I took from Paulo Coelho’s novel of the same name. The novel talks about sex and physical attraction, but it also explores the nature of love and how love goes beyond sex.

In the novel, Coelho says, “No one loses anyone, because no one owns anyone.” I was inspired by this message; it says everything and it awakened me to the truth of its meaning. This is the true experience of freedom: having the most important thing in the world without owning it.

It is not always my direct intention to include aspects of my personal life in my paintings, but living as a human, a daughter, an artist, a hybrid of figures, I believe the feelings I get from living my life are both intensely private and intensely universal at the same time

You once described yourself as “merely a medium” in your work, and you have spoken at length about Korean shamanism. Can you explain how you see this role for yourself?

In the past, Korean shamanism was deeply related to universal human emotions such as happiness, sadness, love and resentment. Most intriguingly, it also played a role in negative parts of life, such as hatred, jealousy and even death and disease.

Thinking of shamanism gave me a new understanding of the fundamental power that I had always pursued in my artwork. For me, art should be somehow helpful and useful; I believe that this is the fundamental power of art. All of us have problems, I just bring my art into the world and hope that it will be useful or helpful for someone who believes in it. This is a very simple, spiritual attitude towards my work that I try to maintain.

“For me, art should be somehow helpful and useful; I believe that this is the fundamental power of art”

There is a violence in your work but also quite a joyful energy. Do you consider the feelings you might want to transfer onto your viewers when you’re making a work, or do you like to leave things very open to interpretation?

It is all about interpretation.

You melt the satin fabric on the surfaces of your canvases before applying paint. How do you see the role of destruction and creation in your work?

A lot of the inspiration for my work comes from daily life experiences. The idea of melting the satin fabric comes from a childhood experience of mine. When I was young, I used to enjoy playing alone and exploring the contents of cupboards and drawers when my mother wasn’t home. I used to love taking out the fabrics hanging in cupboards and smelling them, and lying down in them. The fabrics themselves were beautiful; the bold colours, the patterns. The old traditional Korean fabrics felt so exotic to me. I loved playing with them and somehow I noticed how easily the satin materials melted. I took a lighter and tried to draw on the fabrics with the fire. That particular experiment didn’t go very well, but the experience was very strong and somehow always stayed in my head.

I think unconsciously I was looking for a way to integrate that childhood experience into my work. I don’t believe in creation as such, I just look for inspirations and possibilities around me and imagine ways to adopt them and transform them in my own work. It is all about curiosity, flexibility and experience.

Destroying a piece of your own work is not easy when you have put so much energy and time into it, but repeatedly destroying and rebuilding is part of the process. For me, it represents a temporary death and a transformative rebirth, rather than an examination of the shortness and fragility of life.

What made you first want to be a painter?

I don’t have a clear memory of the first time I wanted to be a painter. However, at my first show in Japan, I remember having the realization that I was one. It had been an amazing show, and I sold many pieces of work, and was very happy. However, quickly the happiness was replaced by the realisation, “Shit! This is serious!” People had paid for my paintings, and I had so many doubts and questions for myself, but I felt like I had to keep going and not let down the people who believed I was a serious painter.

I have had so many beautiful experiences as an artist that made me determined not to give up. I think this determination to not give up is much more important than a single realization that I wanted to be a painter and that being a painter was something I was called to do.

You’ve lived in Korea, Japan, the US and now Poland. Does any one place hold a special place in your heart?

Each of these places are special in my heart. The reality is that every single place that I have lived has given me so many good memories and so many horrible memories at the same time. I both love and hate all of those places.

But I believe that countries and locations are not the important thing. My philosophy is that wherever I unpack my bag and settle down is my home. Home is where the heart is, and my heart is my husband and soulmate, the great artist Jakub Julian Ziolkowski. This is the most special place in my heart and I am so happy that I have found a real home.

Until 31 March at Parasol unit, London 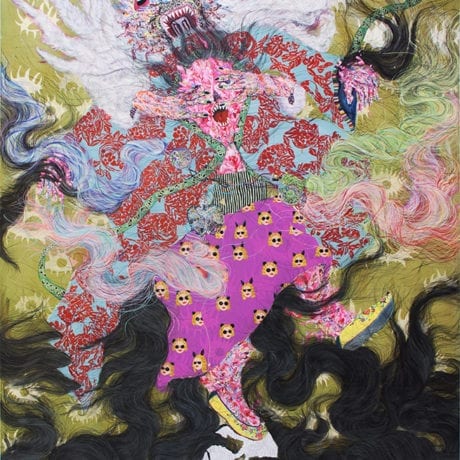