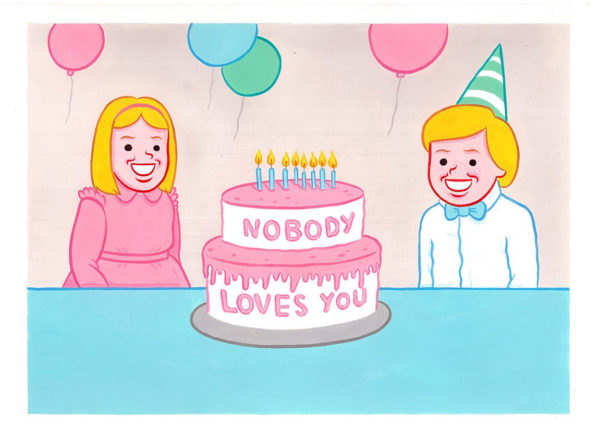 Joan Cornellà, Nobody Loves You, 2019

With today marking the opening of Miami Beach Art Fair, we’ve no doubt the art-centric and glam will be prepping for a week of partying, pretending to remember people’s names and sipping their way through both fun and awkwardness. Joan Cornellà’s work is going on show at GR Gallery’s booth at the event in a solo exhibition of 25 works; but this one image, however, feels pretty spot on in its depiction of the plastered-on smiles of “yeah, we’re having fun, honest”, that even the most gregarious of us wear when feeling knackered, jaded and networking-worn. It also perfectly surmises the Catalan artist’s Joan Cornellà’s bleakly comic, frequently surreal take on the world. His way of satirising the mundane and summarising humanity’s basest, darkest drives is unparalleled, and it’s little surprise he’s transcended the world of intent meme fodder to art world dream through smart use of colour, composition and character design; borrowing from the false utopias of 1950s advertising and updating it for dystopian present reality. “In my comics characters are like plastic and always have a big smile even though horrible things happen to them constantly. Everything is exaggerated, although certain behaviours can relate to real life,” says Cornellà.