I first saw Isaac Julien’s work when I was a student, when his nine-screen film installation Ten Thousand Waves showed at Hayward Gallery for its London preview in 2010–11. It was the first time I really felt the emotional impact of moving image within a gallery space. Dramatic, sublime and gut-wrenching all at once, the work moves with sensitivity between real-life footage of the horrifying Morecambe Bay tragedy of 2004 (when twenty-three Chinese cockle-pickers died in the UK) and Julien’s own material, which was shot on location in China. Some parts of the work show the actress Zhao Toa re-enacting scenes from The Goddess (a Chinese thriller from the thirties) and some depict the Fujian province goddess Mazu, played by Maggie Cheung, flying through a luscious Chinese landscape. At moments throughout the work, the façade of filmmaking is exposed, as green screens are revealed in place of landscape, and film crew are seen in shot. At other points, the reality of the Morecambe Bay footage is all too glaring. Sitting on the floor surrounded by giant screens, I felt overwhelmed. Julien’s work is more than cinematic; as the viewer, you become engulfed.

“Sitting on the floor surrounded by giant screens, I felt overwhelmed”

“I like cinema as a technique, but I think that cinema which we see in the movie houses is not incredibly interesting these days,” Julien tells me, when we meet at his spectacular and very distinctive studio (designed by David Adjaye), which sits next to a canal in East London. It happens to be his birthday, and he is in high spirits. “There are a few films that are inspiring, but I think cinema culture is pretty dead in the water these days. It’s just boring, you know, and the art world has proven itself to be a much more dynamic space (until the grip of the art fairs).”

Before meeting Julien, I watch a semi-final edit of his latest work, Lina Bo Bardi – A Marvellous Entanglement, which nimbly weaves together a host of art forms. Conceived as moving image, the multi-channel work is a celebration of the late, Italian-born, Brazilian-based architect Lina Bo Bardi, whose modernist buildings came to house magnificent displays of myriad art forms such as dance, painting and music. Julien’s work in turn brings together acting (from eighty-nine-year-old Brazilian legend Fernanda Montenegro and her daughter, respectively playing the older and younger Bo Bardi), dance, music, filmmaking, architecture and more. Always keen to take on the total scope of a subject, Julien and his team have embedded themselves in the world of Bo Bardi, extensively researching the history of her creations, shooting on location in her numerous buildings around Salvador and São Paulo, and working closely with creative groups in the area.

I wonder how Julien sees his role. He becomes more than a filmmaker, but the logistics and scale of each work appear to supersede the typical requirements of an artist. One scene in Lina Bo Bardi – A Marvellous Entanglement between Montenegro as Bo Bardi and Zé Celso (the  Brazilian  stage actor, director and playwright, with whom the real Bo Bardi created the spectacular Teatro Oficina, a theatre space designed entirely from painted scaffolding—the idea allegedly came to Celso during an acid trip) appears hilariously improvised. In the scene, the actors mull over time and temporality, referencing Bo Bardi’s phrase about time as a “marvellous entanglement”, and try out different accents, laughing like old friends. The scene feels decidedly free of an autocratic director’s hand. Does Julien like to put all the elements in place, and then step back to let them play out quite freely?

“Definitely, definitely, definitely!” he answers enthusiastically. “It’s the same when I was making Ten Thousand Waves. There’s a moment where, if you’re not really from a culture, you have to let things play out in a way that the people that you’re making the film with and about…” he pauses, “…they have their own synergy and energy, so I hope there’s a reflexive aspect in it, where you can have that idea of play, or something that’s self-reflecting. To be honest, the filming hardly needed a director; they could do it much better in some parts than myself.”

Julien’s work is often complexly entangled in a multitude of issues. Throughout his career, he has made work in reference to politically-significant disasters (Ten Thousand Waves), sexuality and repression (Looking for Langston, 1989/2017), and, most recently, black history and theory (Lessons of the Hour, 2019). While Lina Bo Bardi – A Marvellous Entanglement can be seen primarily as the creative celebration of an exquisite, genius architect, it has many political layers stirring at its core.

“In a way it was uncanny that Lina Bo Bardi first went to Salvador at the time of the fascist dictatorship, because when we were shooting this work last year, it felt like the beginning of another era of dictatorship. There’s never been such a right-wing, fascistic president as Bolsonaro, who, like Trump, is so blatantly anti-human rights, anti-indigenous cultures, violently homophobic and misogynistic. He even said, ‘I wouldn’t rape you because you don’t deserve it’ about a congresswoman. He really is beyond, beyond, going as far to say ‘I am in favour of torture, you know that. And the people are in favour as well.’ So, this kind of fascistic return, we felt when we were in Salvador.  But actually our work is a poetic meditation on Lina Bo Bardi. It’s also about young Brazilian artists responding to Lina Bo Bardi’s building today through dance and performance. Inevitably, some of issues do surface, but it’s not the film’s main preoccupation. I’d say the main preoccupation with this work is the artistic legacy that Lina Bo Bardi has given Brazilian culture and how that resonates today beyond the spaces of academia and the museum.”

“In a world that often favours cynicism, his works languor in the affecting possibilities of art”

“I didn’t really want it to be a position on something,” he tells me, when I mention the background of this work, as well as the potentially hard-hitting historical and political narratives he has explored in previous works. For Ten Thousand Waves, Julien again embedded himself in the subject matter, visiting the remote province of Guangxi that the cockle pickers had left for a new life in the UK, and exploring the long and traumatic history of humans migrating across the sea. “I think my perspective was very much about trying to make a work where you’re looking at the question of people moving or migrating from such long distances, and what happens to them. They are drowned in the sea. That signifies in black culture. Also, thinking about the fact that in Chinese culture, especially in the  Fujian province,  people have been travelling for thousands of years. The European anxiety on migration is kind of a blip. If you take the long view, it’s one little part of the globe which currently has an anxiety about itself, which leads to obviously stupid things, like Brexit.”

Considering Julien’s earlier comment on the film industry, it is perhaps little surprise that he comes from as much of an art background as a film background. His main tool may now be moving image, but his context is art in every sense. “I went to Saint Martin’s School of Art; I studied painting, did still life, drawing, sculpture. In the early eighties I had been involved in contemporary dance, and as a young activist, I was involved in socialist youth organizations,” he tells me. “In a way—and it’s really about how you can utilize all the different forms to make work—film is a perfect art form; you could say it’s the sum of art, where it’s integrating all the different art forms; sound, music, performance. But if I hadn’t studied still life, the space between objects and objects themselves, all of those things, I wouldn’t really grasp them in the same way. If I hadn’t studied film alone, or if I hadn’t studied painting, then I wouldn’t think about colour in the same way I do now, I wouldn’t think about the choreography and movement of the screens in relation to one another, or how to install the work in different ways if I hadn’t studied dance. All of those things are the reason for this sort of expanded cinema and thinking about the aesthetics and art-making that resonate in some way.”

There is a sense of indulgence in his work, a real enjoyment of each art form—music and sound are lavishly lashed over his moving image, cameras pan across dancers’ outstretched limbs and time stretches out. In a world that often favours cynicism, his works languor in the affecting possibilities of art. Before I meet Julien, I watch a Tate film of him comparing his role to that of a poet. Is that something he strongly connects with?

“Yes, absolutely, I would say that my practice is really connected to being a poet,” he agrees, “but not in that kind of romantic sense. In a way, it is utilizing different political, cultural and aesthetic languages and making them become a bricolage of images of some sort. So it’s not the kind of linear narrative that we expect to see, but to create elements of surprise and wonderment.”

“I would say in my works there’s always that balance between these things; poetry has its place, but regimes of truth and representing something which is a certain reality also have a place, and I think that’s very important.  Sometimes one can be ambiguous about the two things and that is something that some people don’t like… My work has developed its perspective and has been informed by certain experiences. ‘You can’t make things about certain experiences if you don’t experience those things yourself’—I’ve said that before, and I know it’s not completely true, because a lot of artists can be quite good at making things about ‘other’ experiences. That’s where the art of film can live.” 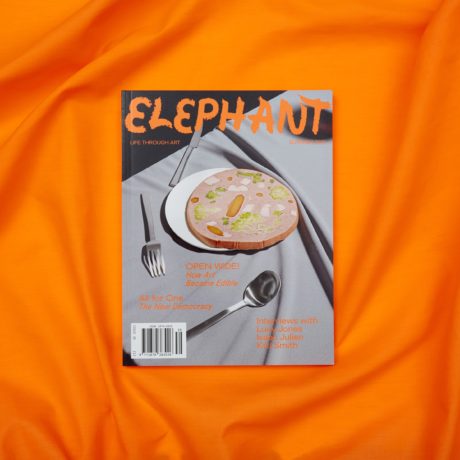