The sci-fi imagination of Lee Bul literally lit up the Hayward Gallery last night, as one of the artist’s works set on fire just an hour before the private view was scheduled to occur. It was an appropriate moment for the exhibition, as the works look as though they have smashed into the gallery from another cosmos. The first floor, which has been left in its pure state (devoid of any partitions) offers immediate views of several futuristic installations, the first of which is a shocking rupture of shattered mirror fragments, domestic lightbulbs and a glistening black creature that looks as if it has just crawled out of the “Upside Down” from Stranger Things. Meanwhile, several squishy octopus-inspired suits hang from the ceiling, accompanied by more severe sculptures of partially dismembered, heavily armoured robot women.

“Everything starts out as utopian, it is only with the passage of time and reflection that it becomes dystopian”

This tension between hard and soft, or beauty and revulsion, is intrinsic to Bul’s practice. She has always been fascinated by duality, the two sides of every coin, and it shows in her incredible treatment of materials, which is somewhat attributed to her interest in domestic substances related to female labour. Her deft manipulation of swathes of crystal and acrylic come to the fore in her sculptural pieces that directly recall the utopian designs of modernist era building plans. In Sternbau No. 2, gems, glass beads and bronze chains come together like some kind of luxurious architectonic chandelier, while Excavation employs fibreglass, plastic and artificial hair to erect a slightly more gruesome urban structure.

Considering Bul’s interest in the optimistic outlook of 1960s modernism, it comes as no surprise that Hayward invited her to not only fill the galleries, but also to create a site-specific web of crystal and stones that has been draped over the gallery’s concrete exterior, as if its Brutalist edifice has been subtly bedazzled. While considering this delicate beautification and the divisive nature of the Southbank’s aesthetic, I asked Bul whether the Hayward represents a utopian or dystopian state, but she explains that there is no black-and-white answer: “Everything starts out as utopian, it is only with the passage of time and reflection that it becomes dystopian. This building has gone through the issues of the eighties and nineties, but now it has come through as a treasure. It is of great importance.”

This historical hindsight has also been employed in two exhibition “inserts” that offer contextual timelines crucial to Bul’s own life and practice, but are perhaps not overly familiar to a UK audience. One covers the history of the demilitarized zone that separates North and South Korea, and the second offers an overview of subversive female Korean artists and activists from the 1960s to the 2000s. It is slightly unusual to see this museological approach employed in a mid-career show of a contemporary artist, but it is actually a valuable resource for understanding the landscape in which Bul has emerged, not to mention her considerable influence within it.

It’s perhaps fitting that the latter timeline was cordoned off during my visit as a particularly troublesome installation titled Majestic Splendor was being tweaked. The piece consists of mylar bags containing rotting fish covered in sequins and beads. It quite literally caused a stink at MoMA in New York back in 1997, when the bespoke refrigeration system failed. This time around, the fish have been coated in preservative chemicals to ensure the work’s longevity.

Nearby, another somewhat absurdist work promises limitless life. Live Forever III takes the form of a bespoke single-person karaoke pod. It is both luxurious and comfortable, like a first-class version of Ellen Ripley’s hypersleep chamber in Alien, and offers a (decidedly warm) confined space to sing along to nostalgic hits that Bul remembers from her youth, accompanied by single-channel video works. The generous reverb gives everyone the chance to have a beautiful singing voice, which alludes to the idea of mutating narrative and a quest for perfection.

“This building has gone through the issues of the eighties and nineties, but now it has come through as a treasure. It is of great importance”

Other video works are presented in a more orthodox fashion, though their content is much more challenging at times. For example, Abortion shows rough and ready footage of the artist as a young woman, suspended upside down while naked, and recanting her own illegal procedure. She is in physical pain, which seems compounded by an audience sucking on lollipops (provided by the artist) as if they are revelling in some form of dark ritual.

Surreal tendencies remain in other videos such as Sorry for Suffering—You Think I’m a Puppy on a Picnic? Here, the artist adorns one of the octopus costumes replicated in the first gallery and wanders the streets of Tokyo, encountering quizzical onlookers and distraught airline staff. Bul has also revisited her biomorphic creatures with a selection of wall-mounted works inspired by Jean Rhys’s Wide Sargasso Sea, a follow-up novel that seeks to humanize Jane Eyre’s Bertha Rochester, commonly considered the “madwoman in the attic”. Once again, these works are shown in parallel with a cabinet full of glossy porcelain cyborg parts, reiterating the hard and soft silos that female emotion and physicality are often ascribed, as well as a prophetic nod to the future of high-tech, gendered cyborgs.

Upstairs, sheer scale becomes the overarching factor in the form of an enormous foil Zeppelin. The structure, titled Willing to be Vulnerable, might immediately recall conflict and violence. For Bul, however, it is as much about hope, relayed in the form of the technical advances heralded by airships (before the Hindenburg disaster abruptly called an end to commercial flights in 1937). The installation brings duality to the fore again, as viewers are hardwired to marvel at the structure while simultaneously recognizing its symbolism, both in terms of conflict and pain, but also the constant quest for technological advancement. It is a meditative end to a show bursting with opposing forces.

Until 19 August at Hayward Gallery, London 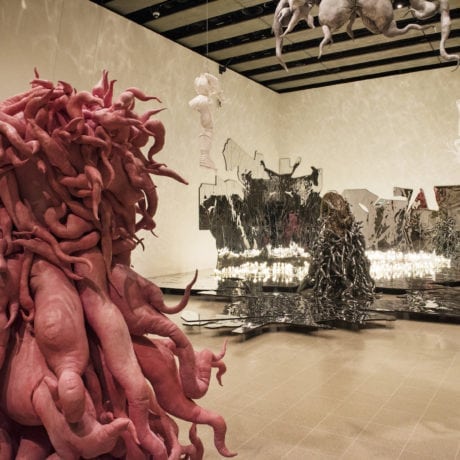