These Pamphlets Celebrate the Intoxicating Worlds of Witchcraft and Magic - ELEPHANT

What is Rough Trade Books x Museum of Witchcraft and Magic?

Ritual, mythology and magic converge along the lines of everyday experience in this new series of pamphlets, conceived by Rough Trade Books and Cornwall’s Museum of Witchcraft and Magic. The collection of four titles, all of which feature collaborations between visual artists and writers, examine the ways in which the otherworldly and the occult interweave with the tangled web of human struggles, as many people search for meaning, order and empathy in a chaotic universe.

Who is behind the zines?

While Rough Trade is well-known as an independent music label, The Museum of Witchcraft and Magic, based in Boscastle, has a long history of collaborating with storytellers, artisans and practitioners, so it comes as no surprise that this new project involves artists at the cross-section of many different disciplines.

In Goblins, writer, translator and drummer Jen Calleja ruminates on why she has always identified with the gruesome and slippery creatures that populate fairy stories, likening her own “impish” temperament to the puppets that populated the films of her youth, courtesy of Jim Henson. By identifying Jareth (the alluring yet predatory Goblin King played by David Bowie in Labyrinth) as a figure not dissimilar to the posturing musicians who saw her as a sex object as opposed to a peer, she also grapples with the messy expectations of sexuality, performance, power and feminist mischief-making.

The accompanying imagery “made from the mind, spirit and hands” of Rachel Louise Hodgson further interrogates what it means to be “goblin-like”, tapping into the razor-thin margin between juvenile sexuality and female autonomy. No wonder her statement reads that she wishes “to amuse and disturb you”.

Further interrogations into ancient mythologies are formed in The Cult of Water and Satan is Real. In the former, David Bramwell explores the base power of water—specifically rivers, the sea and springs—through pagan gods and forgotten, drowned towns in Derbyshire. He also explores the ancient symmetry of “the line and the circle”, whether it be associated with local legend or binary code. Pete Fowler, meanwhile, illustrates the ghostly spire of a village church, which can still be seen in times of severe drought, in the middle of the Ladybower Reservoir.

The two imagined stories penned by Wendy Erskine explore the many different forms the devil can take. In Endor, a bereaved woman finds solace and strange comfort in a benevolent-turned-oppressive spirit, who might have been awoken by a phone app. Conversely, a schoolboy named Jamie becomes fascinated by the satanic power evident in metal music, as he attempts to shed his choirboy skin. Steph von Reiswitz’s drawings compound these opposing narratives, with full-colour sketches of everyday items dotting the pages of Jamie’s adventure, much like the scribblings in the margins of a school book. The more ominous black waters that slide along the page’s edge in Endor point to the all-consuming nature of despair.

While these three volumes follow a narrative prose, Empty Aphrodite serves as an “encyclopaedia of fate”, offering succinct readings into the main tenants of “archetypal powers and forces” which align with the principles of divination. This “alphabetic poetic sourcebook” is conceived by David Keenan and Sophy Hollington, who have previously collaborated on their own Autonomic Tarot deck. Here, Hollington’s linocuts, which by their very nature explore definitions of positive and negative space, speak to the forces of light and dark in everyone’s lives. The pamphlet includes a pack of randomly selected symbolic stickers, to be used in a bespoke fate-casting board found in the central pages.

Why should you read them?

The literal magic found in each of these titles is in the expansive interpretations of spiritual realms and ancient forces. Deep understandings of nature, folklore and classical myths rub alongside pop culture, modern music and technology, while fictitious narratives and fragments of biography build stories that show how the age-old elements still hold currency today. They help us better understand not only the complex strata of ritual and rite that define the land beneath our feet, but our relationship to the much more ephemeral structures of human existence. 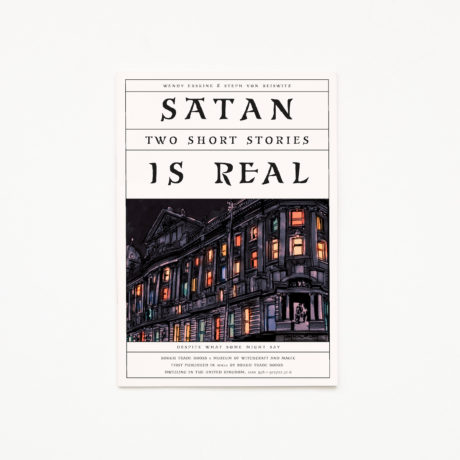