Three years ago, after a long and tiring stint at Art Basel, I met Tim Rollins and K.O.S. for an interview. The group’s life force of energy was an incredible wake up and shake up, after a week submerged in the relentless commercial aspects of the art world. They felt different, buzzing with ideas and with a tirelessly energetic outlook that felt at odds with many of the artists I had met previously.

The group first burst onto the scene in the early eighties. Rollins, having taken a teaching position at a south Bronx school, had applied himself more than possibly any teacher ever (save for Robin Williams, on film) and had formed a group of students who would name themselves Kids of Survival.

“We knocked on the front door of the art world. We rang the doorbell. Ding-dong! They looked through the peephole, they saw who we were and they pretended they weren’t home,” Rollins told me when we met. Their work, created as a group, and often from a single, powerful and political text, was to end up in museums and fairs around the world. In recent years, Rollins and a few key members continued to lead various workshops in schools and colleges, mostly around the US.

Rollins’s sudden death in late 2017 came as a shock to the art world, and of course, to the tight-knit group themselves, who aliken their strong and emotional bond to that of a family. While processing the grief of losing their founding father, the group also rallied around to work on the late artist’s estate, and to plan the future direction of their output.

Now reformed as Studio K.O.S., the four members have recently opened their first exhibition since Rollins’s passing, bringing together key works from their history at Lehmann Maupin gallery in New York. The show is curated by a long-term supporter and close friend of the group, Ian Berry. I spoke with Angel Abreu and Rick Sauvignon to find out more.

Obviously working on an artist’s estate can be really complicated, whatever your relationship to the artist. Was this something you discussed or planned with Tim beforehand?

Angel Abreu: To be honest, Tim’s untimely passing came as a complete surprise to everyone, and it’s not something that we discussed. Going through his papers, he didn’t really have a plan for what would happen after his death, so we’ve had to improvize. We get together very often.

Rick Sauvignon: We also had what we wanted for the future for all of us. It’s something we spoke about with Tim, usually at a bar or the dinner table. He always wanted the group to evolve, and it has evolved throughout the years, but we almost wanted it to mirror a sort of Bauhaus model. Everyone had their own skill sets but still it required participation in the group to make that happen.

AA: We talked about the Studio K.O.S. model that we’re doing now but it was always under the assumption that Tim would also be involved. He really wanted to move away from being this figurehead on top and have, as Rick said, more of a Bauhaus style with this K.O.S. atelier where we come together with our different skill sets and practices. So, we did kind of discuss what we’d do post Tim Rollins and K.O.S., but not necessarily post Tim Rollins.

RS: K.O.S. is like this church choir, where you have great individual singers but together you have this really great song that everyone participates in and nobody stands out from it. It’s a group effort. With Tim’s passing we had to reflect and reorganize and have each other’s backs throughout this whole ordeal because Tim was like a father figure to us.

I went to a conference on artist estates a few years ago and there were lots of family members talking about how complicated it is, because taking on an estate is linked with something that is intensely personal and emotional but there is so much practical stuff as well. So you’re dealing with two separate and quite massive things there, trying to do the best for the work that has happened but also coming to terms with the grief.

RS: It’s happened to a lot of groups. You know, Fischli/Weiss, Peter had to move on, without David. We almost had to reinvent ourselves but still in the positive light of remembering Tim. Tim just wanted us to keep going. When we did the workshops, we’d always say it was the passing of the torch. Tim was the educator, and then as the years passed, Angel and I and some of the other guys from the group became the educators. It’s always evolving and that’s what Tim wanted.

What has the process been for you with getting Studio K.O.S. started?

AA: The next workshop we’re going to do, we decided it’s probably best to make something new, not necessarily make or regurgitate the themes we did with Tim. Nothing wrong with those, and maybe once we’ve established our new direction we can circle back and they can take on some new greater significance, but we can’t necessarily do the same things; it’s gotta be new. We’ve never worked with James Baldwin before, so we’re looking at The Fire Next Time as a theme for this coming workshop. We’re still figuring out how that will manifest visually but we have a lot of great ideas.

RS: The nature of the group has always been intuitive and organic, so once we get into the studio and start working things start to unfold.

It was only three years ago since I spoke to you in Basel, but it feels like even in that amount of time conversations around access and diversity have expanded so much. Do you feel that has changed the way you work or the kind of topics you work with?

AA: It’s funny, I was thinking on my way here, in a lot of ways—and I don’t want to sound egotistical—we really have been pioneers for social justice as we know it but we didn’t know that’s what was going on because it was all within a family structure. The work has always been secondary to the relationships we have developed and in these workshops it’s just about the relationships. Art changes lives. We take this incredibly seriously. We’re not looking for headlines (although those are nice!) but we really want to make a difference and continue Tim’s legacy. We’re still figuring out what that looks like but it’s starting to come together.

RS: So many educators stick to a structure and they don’t want to change. The group has always been organic and intuitive so every time we’re in a different workshop with different students they get a different experience.

AA: I think there’s too much coddling going on nowadays. I think people are taking way too long to “grow up” and there’s an expectation that every little thing that you do is great. We don’t do that. We demand the best for everyone.

RS: When I first met Tim, I thought he was crazy, I thought he was a madman! A madman with a mission. His mission was to educate young folks about art. I really thought that art was a hobby, something you do on the side, it wasn’t a profession at all. And that really changed once I met Tim. Now we’re doing the same thing with youngsters as well, and that’s the exciting part. You don’t know what’s going to happen.

AA: When students feel like you respect them, and they respect you, you can have honest conversations. And everyone is the better for it.

This is a very broad question, but with the work you’re doing in schools and colleges over the last few years, have you noticed a big difference in how young people are feeling within the current political landscape in America?

AA: I don’t know if we’re far enough away from it to know what the political ramifications will be of this particular political moment. I’m a father, and I have a twelve-year-old and a sixteen-year-old and I’m constantly telling them this behaviour is not right, this divisiveness is not right. It’s a model that is not sustainable. I feel like hopefully what it’s doing is forcing parents and educators to really talk to their children and students. Especially in my son’s middle school they’re really taking a stand. My son is taking a social justice class. We’ll see what happens.

It’s obviously a very tricky political time but it feels like the arts are finding very powerful ways of dealing with it. On social media there are amazing conversations about gender and identity. It feels as though the conversation is getting much more interesting as the context becomes more difficult.

AA: That would be the good fallout, to force us to reach in and remain engaged and not just sit back passively and become consumers. 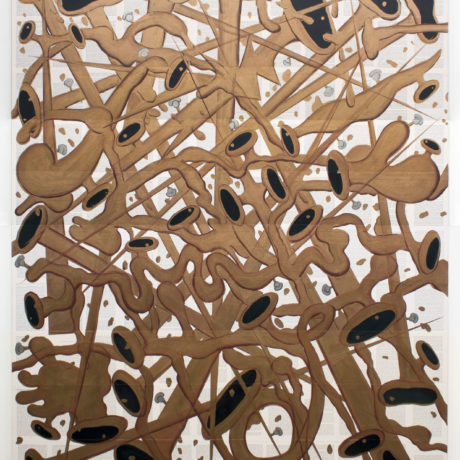