“A licence to kill”, “babies will die” and “abortion never” are just a few of the statements that scream from street posters and motorway billboards as I make my way into the city of Limerick for Eva International, the city’s contemporary art biennial which is on show until 8 July. The rhetoric is coupled with images of foetuses in utero and new-borns. The hard-hitting scene demonstrates the divisive politics that continue to surround women’s reproductive rights, which are reaching fever pitch in the run-up to the Eighth Amendment referendum on 25 May. This controversial legislation, which came into being in 1983, gives the foetus the same rights as the mother. This means that a woman has no right to a termination under any circumstances, even in cases of rape, incest and foetal abnormalities. The country remains the only European nation with such severe laws and has come under mounting pressure from pro-choice activists to hold the referendum, despite vehement opposition from the Catholic church and Right to Life groups.

Considering the timing of this historic event, it comes as no surprise that Eva International has approved a proposal from the Artists’ Campaign to Repeal the Eighth Amendment. They are to create an archival exhibition of material surrounding their campaign, and to perform a “processing protest”, designed to raise awareness. The group, set up by Cecily Brennan, Alice Maher, Eithne Jordan and Paula Meehan, has campaigned to share resources and testimonials ahead of the referendum.

“This is a live campaign, it’s not just pretend. We do this all the time, and we’ll be waiting to hear the results during the exhibition,” says Alice Maher, as she stands among the brightly-coloured banners designed specifically for the procession, which is to take place the following day. “We are inspired by union banners; by things that people brought into the streets to show their support for something. What we really want to do is give people hope. This was also a huge confraternity area and there’s a history of the confraternities marching as a way of controlling the young men in the city; women weren’t allowed to join. The procession is part of reclaiming the streets.”

“The procession is part of reclaiming the streets.”

Rachel Fallon explains the ethos of the performance, which is a far cry from the usual associations found in foreign political rallies. “The whole idea of a procession is that it is a very performative event. It will be more or less silent apart from a chant that we have. It is not a march or a demonstration. It’s actually quite a quiet and elegant procession… We’re starting at the Limerick School of Art and Design, which used to be a Magdalene laundry.” This was the name given to institutions that incarcerated “fallen women” from the eighteenth to early twentieth century, and were the subject of national scandal following the discovery of mass graves.

Fallon goes on to reveal the complex health issues surrounding the Eighth, which are often unknown to the Irish public, let alone anyone overseas. “I found the largest problem, to a certain extent, is that people didn’t understand the ramifications of the Eighth Amendment. It is not only an abortion issue. It has to do with women’s healthcare. There are a lot of consent issues, so if you are pregnant and you want to give birth in a certain way, a doctor can override that if they believe the baby’s life could be at risk, and you have no right to contest them. You also lose you agency if you have cancer. You have to have a test before certain treatments, because if you are pregnant and the treatment could harm the foetus, they will stop it. The moment you become pregnant, you lose your bodily autonomy.”

““The whole idea of a procession is that it is a very performative event. It will be more or less silent apart from a chant that we have.”

It begins with several enormous figures dressed in black, followed by the beautiful handmade banners that recall the aesthetics of those used by the Orange Order, as well as the suffragette movement. A group of women dressed in mourning veils are playing and singing a sorrowful song. After several rows of performance artists, other supporters gather with signs emblazoned with a red “X” through a figure of eight.

Surprisingly, the procession takes place with a fairly minimal police escort and no significant road closures. This seems to work in its favour, as passers-by and casual shoppers stop to stare at the marchers as they stride through the city centre. It is a notably bold move as so many remain in favour of the Eighth, but if its mission is to raise awareness, this seems to do the trick. Most members of the public seem quizzical, though more than a few stand in solidarity of the group at various intersections.

What strikes me is the overall power that the notable silence creates. A group of dancers move swiftly and quietly through a series of movements, often facing directly onto the pavement with arms crossed, and even the final sign-wielding crowd stays mute. The frisson in the air is palpable, and bristling displeasure stands in the place outright heckling. When I am asked by an elderly woman what all this is in aid of, I choose my words carefully, simply stating “the Eighth”. “Oh… I see,” she replies, with a strict poker face.

As an outsider, the whole event is fascinating but more than a little unnerving. As I cross the road to continue alongside the procession’s final stretch, a group of men in their mid-thirties stop to consider the event. “You know, I’m all for the cause,” says one of them, with a shrug, “but all of this art stuff is a bit much.”

All images unless otherwise captioned: The Artists’ Campaign to Repeal the Eighth Amendment, Performance at EVA International 2018. Photo by Deirdre Power, courtesy the artists and EVA International 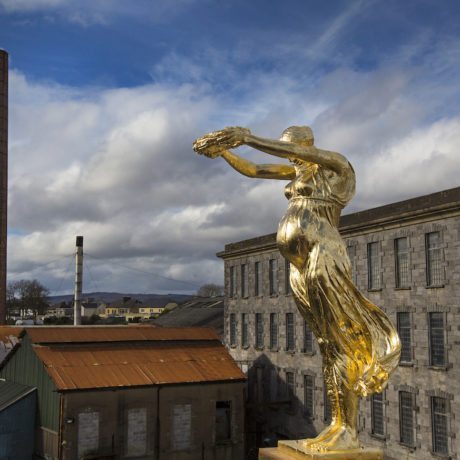