Science and pop culture have proved to be an increasingly powerful formula over the past decade or so. In the UK, we’ve seen increasingly innovative (and packed-out after-hours) arts programming at central London institutions such as the Science Museum and the Wellcome Institute, tech-driven performance collectives like Blast Theory, and a fusion of big-name music and scientific themes at major festivals including Bluedot at Cheshire’s Jodrell Bank Observatory. Now, King’s College London (KCL) has launched the city’s Science Gallery: a new free cultural space “where art and science collide”, and it’s just opened in a permanent home following various pop-up events.

The Science Gallery’s setting—minutes from KCL’s Guy’s medical school campus, the Shard and Borough Market—is pitched somewhere between historic academic base and slickly modern tourist attraction. Its themed seasons (there are three each year, rather than a static permanent collection) are driven by collaborations between KCL researchers and contemporary artists, and the first show feels brightly geared to create a buzz; Hooked: When Want Becomes Need explores the complex, compelling social and scientific issue of addiction and recovery.

“There is plenty of absurd humour throughout Hooked, as well as a heavy dose of pathos”

Hooked draws us in because it is such an innately relatable topic, whoever we happen to be; the multi-media works here are broad-ranging and most are bold in their presentation, yet they don’t sensationalize addiction or vilify our vulnerability. They highlight the factors that surrounds us as well as the physical/emotional stimulants we might repeatedly seek out, and how swiftly these cravings might slip from delight to despair. Olivia Locher’s Another Day On Earth photography series captures that conflict; images such as Pincushion—a sticky, melting ice lolly studded with candy dots that turn out to be sharp pins—seem simultaneously enticing and repulsive.

Richard Billingham’s late-1990s films depict the banality of addiction, and how boredom forms a catalyst. Playstation (1999) fixates purely on the frantic, jerking compulsions of Billingham’s brother’s fingers at the controls of a videogames console, while he plays on a speed comedown. I’m reminded of the old-school name for a games controller—“joystick”—and the mixed messages that term now evokes.

There is plenty of absurd humour throughout Hooked, as well as a heavy dose of pathos. As we react to the exhibits here, they do spur personal realizations; this isn’t about somebody else’s weakness, it’s a human condition with free-form guises and coping mechanisms. As a practising Muslim, I’ve never personally indulged in alcohol, recreational drugs or gambling (although I did grow up immersed in club culture); the premise is to be conscious of your own actions rather than judgemental of others. The irony that I’m wandering around the Science Gallery while jacked up on strong coffee (I couldn’t resist a pre-show caffeine fix from a favourite kiosk nearby) isn’t entirely lost on me.

I watch a slightly stilted sculptural performance for Sugar Rush, where hot tea is poured onto a bijou table made entirely of sugar granules, designed by furniture and architecture studio Atelier 010. Most of the audience have whipped out their smartphones to film; as the material begins to dissolve and buckle, and the vessels fall and noisily shatter, there is collective anticipation, shock and release. We know that this creation is destined to fail; we feel compelled to experience this destiny; we move quickly onto the next experience once this one is through.

Digital arts are a forte in Hooked, and while the exhibition might be rooted in scientific data, its expressions mostly elicit an emotional response. I find it hard to tear myself away from Yole Quintero’s Me, You, Limbo: a dual-screen video installation which considers how our mass addiction to social media has shaped our personal affairs. The rapid-fire edits feel like a mesmerizing stream of consciousness; Quintero’s soul-searching narrative summons the addictive chemistry of love and heartbreak, and her lines are answered by a rather callous AI avatar: “Stay. Stay. I need you more than you think.”

We’re invited into a plush booth to recline on playroom-style beanbags and watch Rachel Maclean’s sixty-minute film Feed Me (2015), but I’m so disturbed and fascinated by its luridly surreal spectacle, that I stand pinned to the back wall and watch for ages, shielding my eyes at points. Maclean has conjured a coquettish and grotesque pop dystopia, populated by brattish adults, fanged ingenues, emojis, text speak and ridiculously catchy tunes—it’s like a Black Mirror take on pre-school TV, I heart it and hate it, and it may be partly responsible for my insomnia last night—along with all the coffee.

Hooked is sleekly arranged in successive sections, from the opening “Natural Born Thrillers” (considering what drives us to seek pleasure and satisfy urges) through strands on twenty-first-century technology, free will and dangerous excess. These flow through the space without feeling forced or compressed; at the same time there’s a growing realization that the everyday information overload that surrounds us invariably creates an urge for new experiences and instant gratification. Perhaps I’m too wired to fully appreciate Joachim Koester’s visual projection The Hashish Club; the work is inspired by the nineteenth-century creative salon Club des Hashischins, yet it somehow lacks the intoxicating depth to encourage you to linger and contemplate this drug and its multi-cultural significance.

Blast Theory lure us into Short Periods of Structured Nothingness via one of their favourite media: a callbox phone. In this interactive audio installation, we’re drawn into messages and overheard conversations from several young women reflecting on their everyday habits and escapes. The experience is intimate yet somehow isolating; the choices we select while listening again give something away about us.

Society punishes us for our addictions, yet it also offers potential support networks. Dryden Goodwin’s The Workshop is a moving visual essay which illustrates a collaborative project with young people at Oakhill Secure Training Centre; the poetry, sketches and reflections on substance abuse are revealing, rueful and empathetic. Daniel Regan’s Threshold photographs (2018) brings us uncomfortably close to the issue of self-harm. Melanie Manchot’s multi-channel video installation Twelve (2015) presents short, sharp sequences that reference various movie scenes, played out by people in rehabilitation from addiction.

Hooked is laced with enough fine details to warrant return visits—as I depart, I mull over the Jenny Holzer-style transmission of online shopping values in Fabio Lattanzi Antinori’s The Abyss: “Vivid Umber… Superb Inky… Clean Starless”, the seemingly infinite geometric patterns in Mark King’s Look on Me and Be Renewed, and the chains of cheap discarded wedding rings you need to pass through to fully view Natasha Caruana’s Divorce Index and Curtain of Broken Dreams. The show’s intense blend of pleasure and pain, and the Science Gallery’s coolly inviting space, both feel like a hit.

Until 6 January at the Science Gallery, London 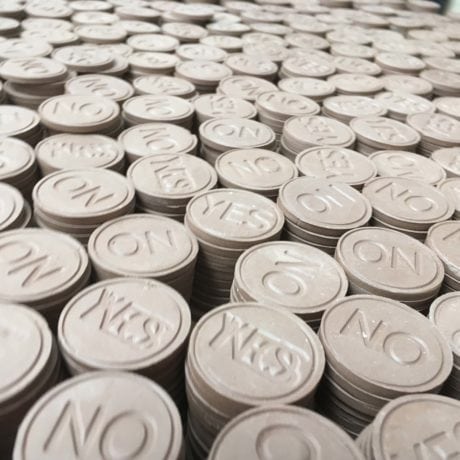 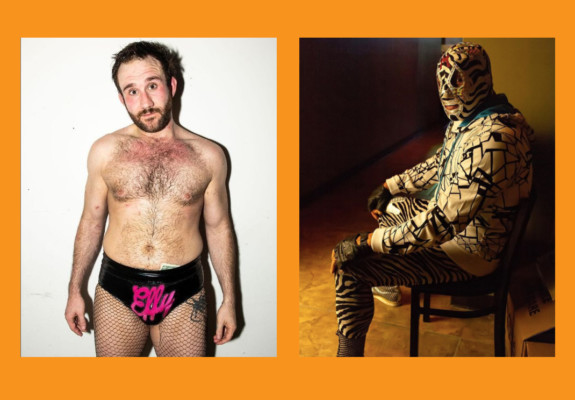 Elephant will not be publishing any new articles for the next twenty-four hours. We have compiled a list of educational resources and organisations to donate to.
Read More