Ryoji Ikeda’s work finds joy in brutality: it’s visceral; at times, terrifying, pummelling us with audiovisual sucker punches. Strangely, somehow this battery begets beauty. His work has always left me grinning like an idiot: it’s as though by its sheer confrontation the rest of the world is forgotten—it feels transformative and powerful in ways that few other pieces ever have.

While this is true for most of Ikeda’s output, it’s best exemplified by the Japanese artist’s ongoing Test Pattern series. The works use a real–time computer programme system that converts data such as text, sound, photography and moving image into barcode patterns and binary patterns of 0s and 1s. According to the artist, “the project aims to examine the relationship between critical points of device performance and the threshold of human perception” through its presentation, in stark, dark spaces of intensely flickering black and white imagery which “floats and convulses.”

The sheer velocity of the patterns (often veering into the territory of some hundreds of frames per second), and the synchronicity of the audio signal and barcode patterns, makes the whole thing simultaneously oddly serene and totally overwhelming. As one adroit YouTube commenter points out, the music “comes with a literal safety warning.”

Perhaps there’s something in the fact that Ikeda is so reluctant to talk about his work that makes him all the more intriguing—his Test Pattern works have to be seen (and heard) to be believed, and it’s nigh-on impossible to accurately describe in words, photographs or even video. He’s spoken about an active desire not to be interviewed, explaining that “I really don’t want to speak about any concepts. Because there are no concepts.”

The fact that the Test Pattern pieces can be formulated by any sort of dataset means that Ikeda has presented Test Pattern in a huge range of different spaces around the world; each becoming entirely unique yet united by its singular premise. The first iteration of the piece appeared in 2008, developed with programmer Tomonaga Tokuyama (who has also worked on all subsequent iterations) at Japan’s Yamaguchi Center for Arts and Media and used eight computer monitors and sixteen loudspeakers aligned on the floor in a dark space.

Since then it’s appeared at sites across Europe and even as a huge public installation in Times Square, activating for three minutes each night, culminating at midnight. It can appear as one-off live shows, in traditional gallery settings, in cavernous warehouses, as well as out in the “real world.” Sometimes Test Pattern is purely floor based, at others it rides up the walls too; but with each, the presence of the lights, rapid flickers and brutal barrage of sound remains a constant. 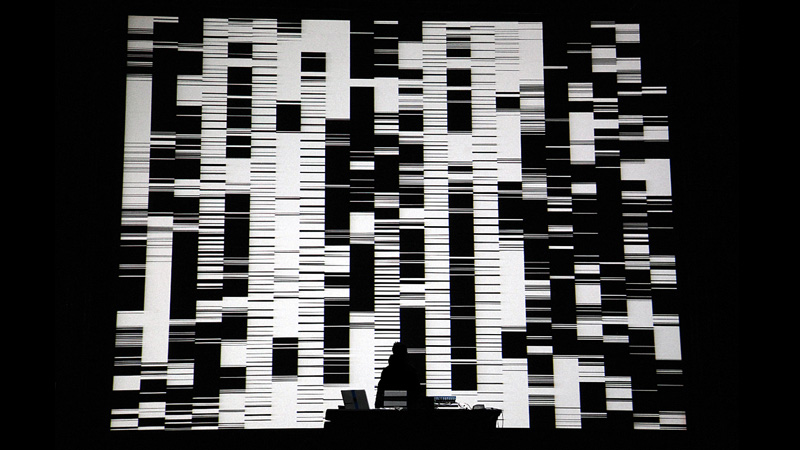 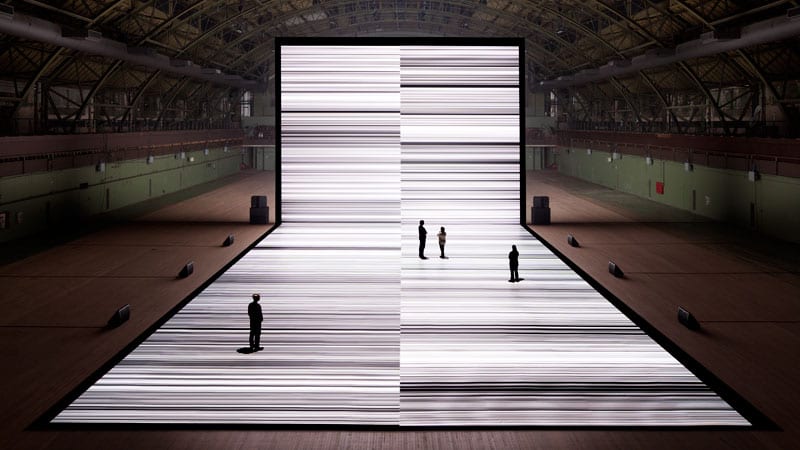 I’ve recently been thinking a lot about this sort of art, which forces you to be completely present within it, and in which only the most contrary of viewers wouldn’t leave feeling at least something. His pieces are not just vast, but often incredibly loud, and use the sheer force of the binaries between light and dark to envelop us.

I’ve bitched and moaned a lot about art that appears to be created (or curated) with the sole purpose of looking cool on Instagram and/or as “look-how-cultural-and-interesting-I-am” selfie backgrounds; and while recent shows of Ikeda’s work have certainly spawned no small amount of such postings, it’s safe to say it’s in no danger of falling in to such a camp. For one, he’s been making such work  long before Instagram was a glimmer in Silicon Valley’s eyes. For another, Ikeda’s work is about so much more than can ever be captured in a two-dimensional image. It’s genuinely, truly an experience that engages and engulfs your senses.