Three times in the last two years—in Berlin, Mexico City and New York art spaces—Sarah Lucas has assembled female friends and collaborators to lob 1000 eggs at white gallery walls. (Men were invited too, but requested to dress in drag or as “giant phalluses”.) A take on the Pagan fertility rite of egg throwing in Spring, which was summarily stripped of most of its playfulness and adopted by Christians as Easter, 1000 Eggs: For Women calls upon and makes new a motif that has defined the artist’s career.

Lucas’s use of the egg in all her work, since 1996’s Self Portrait with Fried Eggs, has playfully engaged with ideas of femininity and fertility at the same time as being a symbol of opposition to pretension. Imagery straight out of the local greasy spoon, perfectly chiming with the straight-talking mood of the YBA-dominated nineties, Lucas’s fried egg boobs motif is by turns puerile or defiant—a fuck you to the male gaze. But it also taps into a rich vein of kitchen sink surrealism that was present in the comedy of the time, led by names such as Vic Reeves and Bob Mortimer.

1000 Eggs: For Women, as well as reaching back into and then expanding Lucas’s own oeuvre, reaches deep into art historical traditions. Before the advent of oil paint, artists would mix pigments with egg yolk to create a quick-drying and long-lasting wash. The process of making Lucas’s wall work, as well as being a performance in itself, is also an act of community and solidarity, binding the participants together in the social act of throwing the eggs, like yolk bound the pigments of tempera five hundred years ago. It also feels like an act of public rebellion or resistance: a protester throwing an egg at a politician, say.

But it is not about making a mess. In a video taken in Contemporary Fine Arts Berlin in Easter, 2017, the artist addresses the participants and says, “it’s about being really neat, and making the most beautiful egg painting”. That rich shade of yellow also provides aesthetic delight to the viewer, as it clearly has done to Lucas throughout her career. She painted the British Pavilion at 2015’s Venice Biennale the same colour. Now it is improvised, streaked, inevitably running vertically, smelly. But it is still intentional.

Lucas intended the work (says the New Museum’s curator Margot Norton in her book about the current retrospective, Sarah Lucas: Au Naturel, of which 1000 Eggs: For Women is a part) to “put the fate of the egg—typically understood as the female reproductive cell—into the hands of women, perhaps alluding to political debates concerning women’s rights over their own bodies”. Now, we’ve just seen Ireland make the historic choice of repealing the Eighth Amendment, while the Trump administration in America looks set to attempt a step backwards, potentially limiting the choices women can make with their bodies. In the enacting of Lucas’s work, each participant gets to choose the sort of mark they make on the walls, and in doing so makes an individual artistic gesture to create a polyvocal work of which Lucas, the celebrated artist, effaces herself, acting primarily as an instigator, or as one voice among many. A true work for our time. 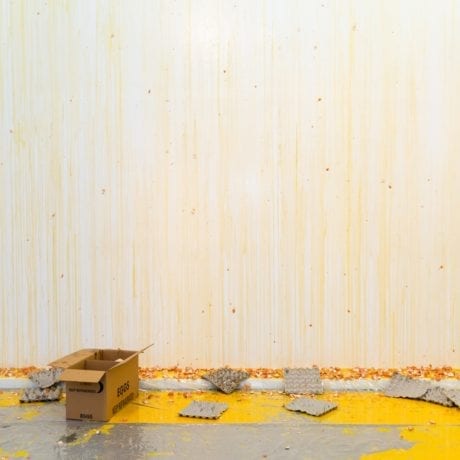