Marina Abramović is a lot of fun. It’s autumn 2021, and photographer Maciek Pożoga has just 15 minutes to capture one of the art world’s most famous faces. After a quick shoot outside the Royal Academy (in 2023, the Serbian artist will become the first woman in the institution’s 250-year history to have a solo show in the main galleries), Abramović becomes enthralled by a trash container heaving with bags in the corner of a car park.

Dashing under a shutter which begins to close behind her (to the mild panic of the accompanying gallerists and the Elephant team), she situates herself in front of the bins: this is where she would like to be photographed. She leans nonchalantly against the edge as Pożoga snaps away.

“I am not thinking about dying as a longing exercise, I’m just thinking ‘My god, if these are my last days, let’s have the best time’”

“You must print the photo with the bins,” she tells me as we sit down to talk, “It will be so funny.” If people expect Abramović to be serious, ferocious even, it is likely down to the relationship many have with death and pain. Her interest in these subjects is often seen as a sombre commitment to the macabre (some corners of the internet have even accused her of being a Satanist). But for the humorous artist, exploring death is a way to embrace life.

“I am very into Tibetan Buddhism and thinking about dying every day is not the way to enjoy life,” she explains. “I am not thinking about dying as a longing exercise, I’m just thinking ‘My god, if these are my last days, let’s have the best time.’ Even in the most difficult times in my life, I try to find something positive. Often this is through humour.”

In the last couple of years, Abramović’s work has had a renewed focus on death. Her travelling live opera, 7 Deaths of Maria Callas, takes its cue from the famous opera singer who died at the age of 53. The artist has long been fascinated by the life and untimely demise of the soprano (she notes that they both have characterful noses and are both Sagittarius, the opinionated fire sign).

“I wanted to show people you can get rid of pain if you really put your mind to it. I always wanted it to be inspirational”

An accompanying, hour-long film is used as a backdrop to the live opera performances. In seven scenes, Abramović is shown suffering different deaths, which are variously peaceful, violent and euphoric. Each death is set to the soundtrack of a Callas aria and heightened to its absolute maximum, from the impassioned emotions expressed by Abramović in her dying moments to the exuberant costumes created by Burberry’s chief creative officer Riccardo Tisci. Actor Willem Dafoe appears in some scenes. In one particularly electrifying spectacle inspired by Bellini’s Norma, Dafoe is clad in a gold-sequinned ballgown as he walks a suited Abramović into raging flames.

“I always hated the theatre,” she says. “It felt so fake. Working with Willem was the first time I understood how the actor becomes the role. He is such a great teacher for me. I’m not best at acting but at least I’m not faking.” The opera has been a brand-new venture for her, and performances of the show will carry on throughout 2022.

“You know what the worst thing is for me in opera?” she laughs. “Having to take applause at the end. I never stop my performances, the public have to leave before I stop. At the end of the opera all the singers get an applause, and then I have to come on. I’m so clumsy, I trip over my feet, I just think ‘Curtain, curtain, curtain.’ I find myself totally unprepared for it.”

“7 Deaths of Maria Callas is the last thing I’m doing on death. Now I am interested in the afterlife. I’m interested in portals and states of consciousness”

It’s hard to imagine Abramović being unprepared for anything. She is friendly and light-hearted in person, but she is also tough. “You will soon learn with me, the word ‘No’ is just the beginning,” she jokes. It’s not so much that she doesn’t feel fear, she just chooses to confront and push through it. “I always wanted to show people you can get rid of pain if you really put your mind to it,” she explains. “I always wanted it to be inspirational.”

I wonder when Abramović first felt this urge to push herself towards fear. She talks about a time when, as a teenager, she decided to break her nose so the doctors could repair it to look like Brigitte Bardot’s. Armed with photographs of the French actress in her pocket, she threw herself at a sharp edge in her parents’ bedroom. “I missed the edge, cut myself, fell on the floor with blood everywhere and photographs all out on the floor from my pockets,” she laughs. “My mother comes and slaps my face. End of story!”

She has often spoken about her turbulent relationship with her mother, but she also credits her parents and upbringing in Belgrade for bestowing such focus on her. “Coming from communism, when you grow up your parents have this mission,” she says. “I had this mission once I found performance art that I would never give up for the rest of my life. When I made The Artist Is Present I was 65, and I could never make this piece when I was 20. You need so much training and time to do this kind of stuff, it takes your whole life.”

Intended to improve will power, increase concentration and push personal limits, The Abramović Method is a series of mentally and physically demanding tasks created by the artist, which have famously been tried out by Lady Gaga (“a great student”). In 2021 Abramović digitised the method, making it available for anyone to download via WeTransfer. More than half a million people had accessed it by the time we spoke.

“This is the last act of my life. You start thinking that every day matters, to cut the bullshit and do the things you want”

“I am speechless, I always worried that the method couldn’t work digitally but it can,” she says. “It’s based on a set of instructions and then it’s all up to you.” One exercise simply involves counting grains of rice. “The rice counting takes six hours if you do it properly. Take an amount that you think you can actually do! People are greedy, they take too much and lose the will to finish it. My theory is, if you can do the rice, you can do life.” Now the method is out in the world, the artist is laying down her legacy. Her trailblazing show at the Royal Academy, which was originally planned for 2020, takes a step beyond death, to explore what happens in the afterlife. It feeds on from a recent residency at Modern Art Oxford, where she has returned with a new show Gates And Portals.

“7 Deaths of Maria Callas is the last thing I’m doing on death,” she says. “Now I am interested in the afterlife. I’m interested in portals and states of consciousness. When I was on the residency at Modern Art Oxford, it was so interesting to study ritualistic objects and objects of power. I am always inspired by ancient cultures and am interested in how I interpret them in my subconscious. It was amazing to be on this residency like a student.”

She is also using her time to explore new art forms, diving into acting, opera and TV with great enthusiasm. “I did Marina Abramović Takes Over TV with Sky Arts in the UK, and I had never done this before. They gave me six and a half hours carte blanche just to curate performances, and we showed 65 artists from 31 countries. I am a great archive, I know everything about performance.”

Abramović seems genuinely excited that young people are interested in her work. “I am always very pleased when so many young people come to my talks and bring their parents who are my age,” she says. She has also started supporting artists at the beginning of their careers, curating a programme of five emerging performance artists with WeTransfer last year, and announcing the Circa x Dazed Class of 2021 award.

“I always hated the theatre. It felt so fake. Working with Willem was the first time I understood how the actor becomes the role. He is such a great teacher for me”

“There are some very young people, we are talking born after 2000!” she says, in reference to the prize, which she is about to present when we meet. “I think the young generation is incredible. I can give them some of my wisdom but they can give me a sense of the time in which they live. It’s an exchange. I recently saw this performance by my long-time friend Franko B at Ugly Duck in Shoreditch. I saw this whole new public coming to see him. They were super young and like fashionable punks. I was looking at them like, ‘Wow!’ London is this incredible, very inclusive scene.”

While Abramović is excited by this youthful community, she seems to be at peace with her own ageing after a period of ill-health in her early seventies (she was 74 when we spoke). “When I was shooting 7 Deaths in Los Angeles, I hated myself,” she says. “I was 14 kilograms more than I am now, I felt really heavy, I had Lyme disease, I had high blood pressure and didn’t feel well at all. It was great to die so many times!”

Now she says she is at ease and has a renewed energy to make the most of the time she has. “This is the last act of my life,” she states assuredly. “You start thinking that every day matters, to cut the bullshit and do the things you want. One great thing about ageing is that you get wisdom. You understand feelings, you understand mistakes, you can read people better. I just want to enjoy it as long as I can.”

Marina Abramović: Gates and Portals is at Modern Art Oxford until 15 January 2023. The full version of this article appeared in Elephant #47 — Spring Summer 2022, available to buy here 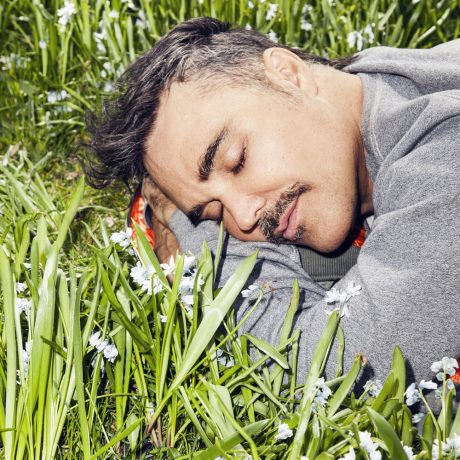