At first glance, Hunter Potter’s simple forms, seemingly benign faces, rainbows and depictions of good ol’ rural labouring dudes seem straightforwardly chipper, but it doesn’t take long for the darkness beneath to surface. Potter’s meandering journey to his current painting practice began with his early life working labouring and roofing jobs in a small town in rural upstate New York. He’s long been artistically minded, dabbling in graffiti before taking painting classes and getting switched onto the work of painter Eddie Martinez, who proved a transformative inspiration. He eventually took the plunge and moved to Brooklyn, around six hours south, to focus on his studio practice around bar jobs and commit to chasing the “white rabbit” of making it as an artist, as he refers to it.

Much of his work—and the title of his current solo show at London’s Public Gallery—draw their names from songs by the likes of Bob Dylan and Arthur Russell. This body of work explores the ambiguities of contemporary masculinity, taking motifs of rural labour, rainbows and horses as metaphors for simple hardworking masculine roles, transformation and liberation respectively.

You are exploring very American masculine archetypes, that blue collar, hard labouring, suburban or rural grafting lifestyle. Is that really the man you wanted to be?

It’s obviously an incredibly exaggerated look at what I could have become, or what part of me wishes I had become. There’s something nostalgic and kind of wholesome about the idea of this very traditional, hard-working simple man: there’s not this never-ending chase of the white rabbit that comes with moving to the big city, where you’re just trying to pay the next bill and getting your next show. A stability comes with pursuing something a little bit safer: it’s that overly simplified American dream: “This is what you do. You get your property, build a house”, or whatever. But the grass is always greener.

Is that partly the reason that the faces you paint are so simplified—they’re an “everyman” figure?

Absolutely. But the darker side is the “ignorance is bliss” thing: maybe these people don’t know what they’re missing, since this is all they know. You see [the paintings] of this guy with his huge boots working on his farm, but farming is horrible, exhausting work, often making pretty much no money. We glamorise that but it’s brutal.

Tell me more about the horse.

It’s using that same historical lens: horses were symbolically what allowed you to leave town—until you got one, you could only go as far as your two feet could take you. The horse and rider in the painting are also bearing the weight of three friends; maybe if the first rider had shut those people out of his life earlier, he could have galloped away. I look at my own past, and the people I hung out with for a long time who I still love to death, but I probably could have gotten away a little quicker.

Just drugs, things like that. The horse expects one rider: he’s been given four and still has to get the job done. I identify with the first rider who’s kind of screwed up: he makes room for these three other people that he needs to take care of, but like the horse, he’s carrying more than he should. There comes a point in time where you feel like, in order to make the best of whatever you could be, you have to go for it and move away from certain things. I’d been a little lost and didn’t have the confidence or the stability in my lifestyle to do that, and finally moving to New York City was a turning point. 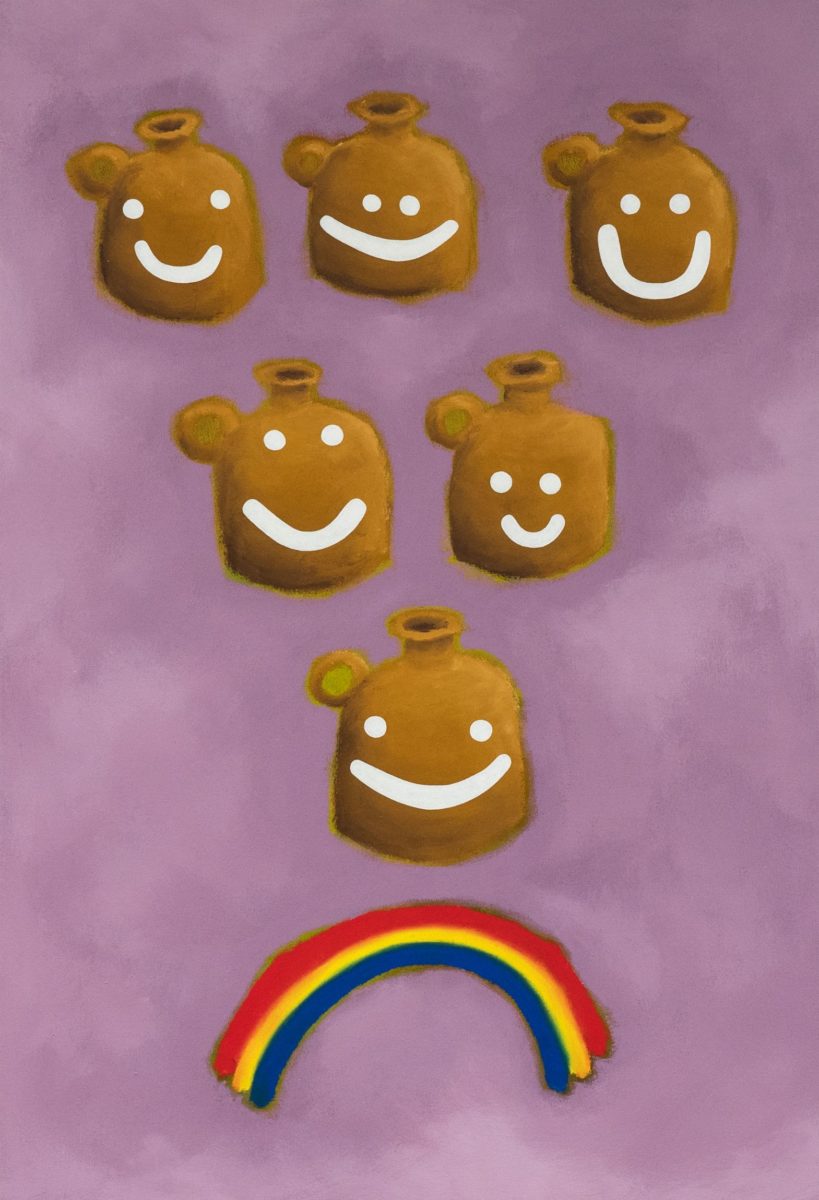 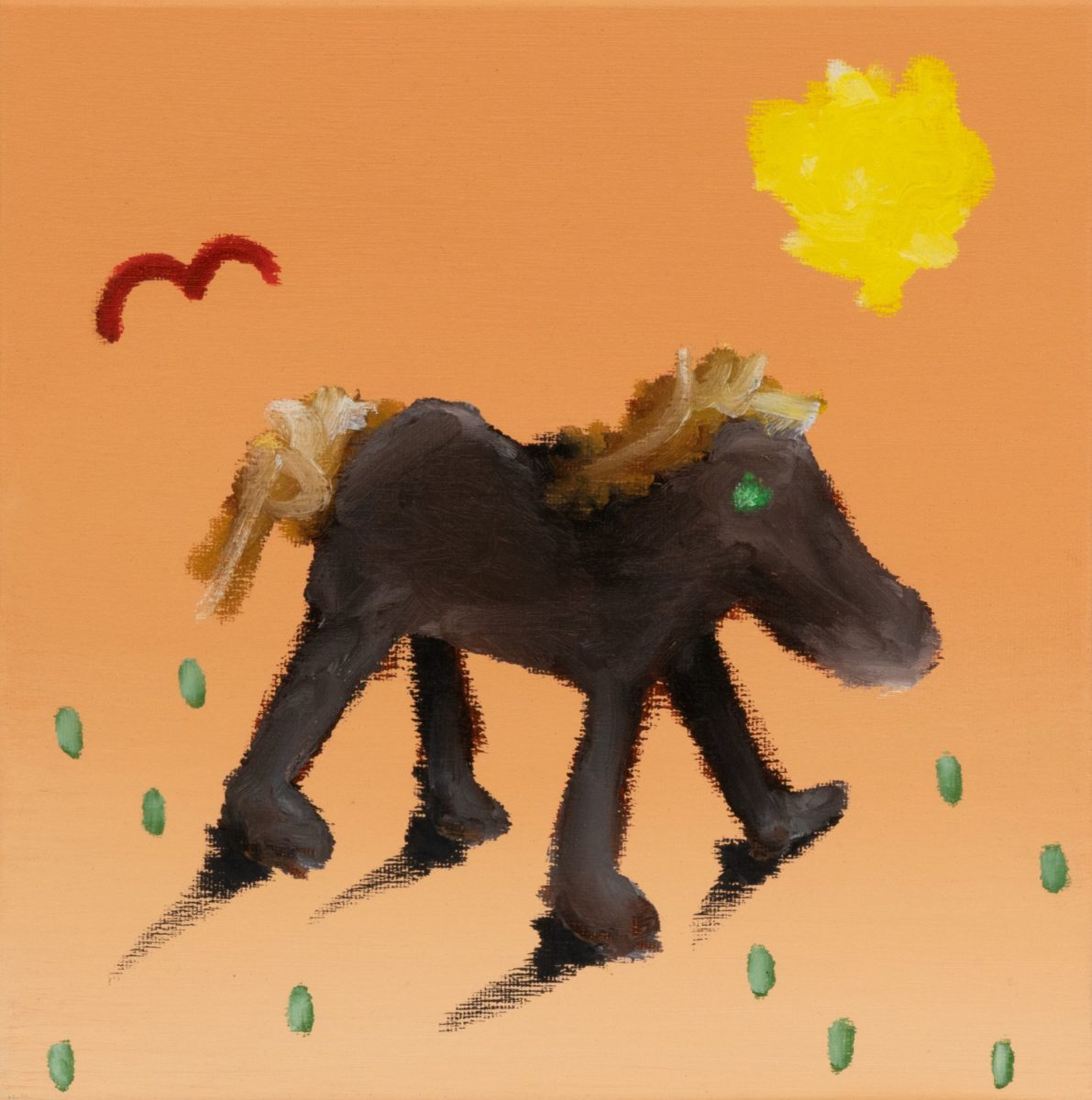 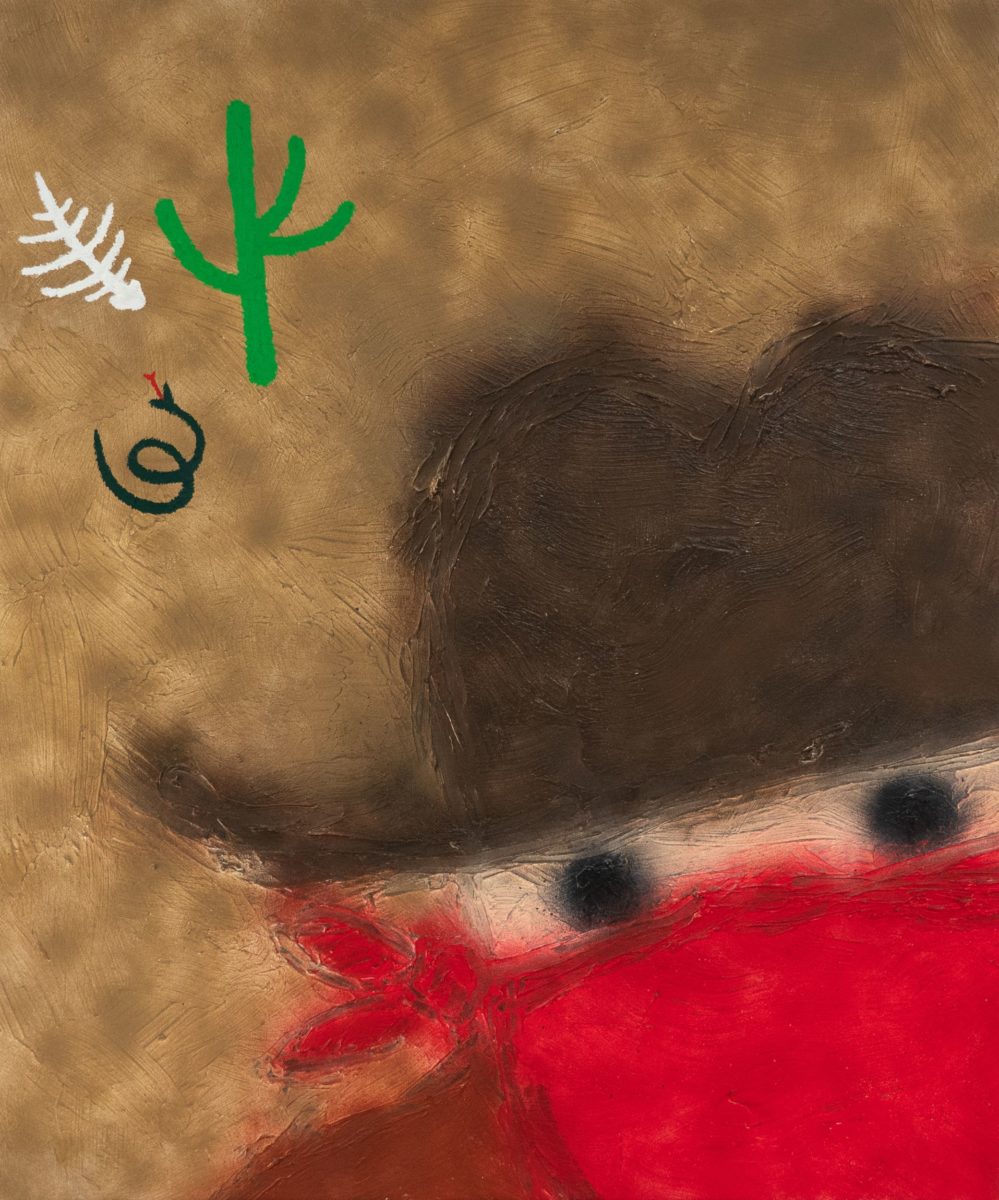 It’s the double sided coin—the idea of the man you want to be, and the man I would never have known I’d like to be if I hadn’t moved. I’ve been really enjoying the current man I am, the way things are, the one who’s chosen to chase the White Rabbit. But the other side is looking at my friends back home who’ve worked very hard, and when the sink breaks they can fix it. So my paintings are about that manual labour, blue collar thing, but also about the idea of being self-sufficient.

That’s what’s behind And it Stoned Me. I spent years in the in this drug realm and was always chasing some thrill; I was never really content. He’s just like out alone, fishing, like “this is good”. I would love to get to that point where that’s the man I want to be, just content—that calmness. 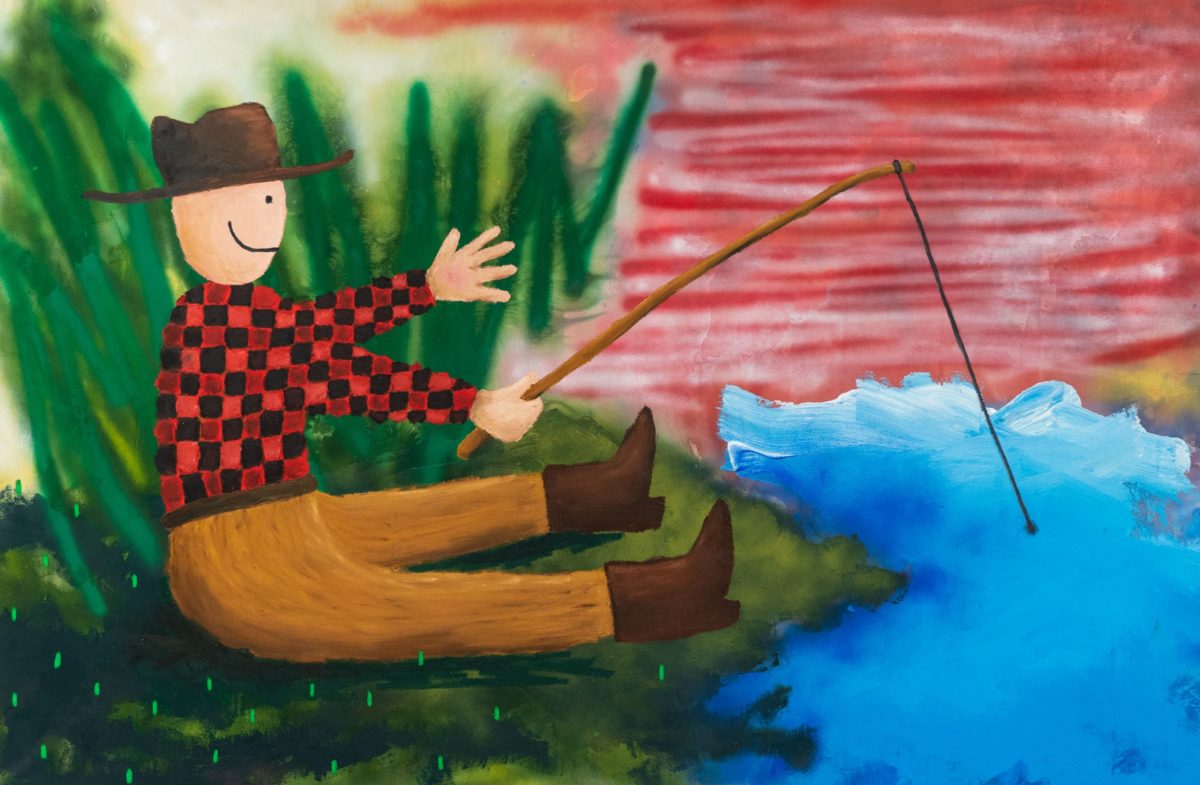 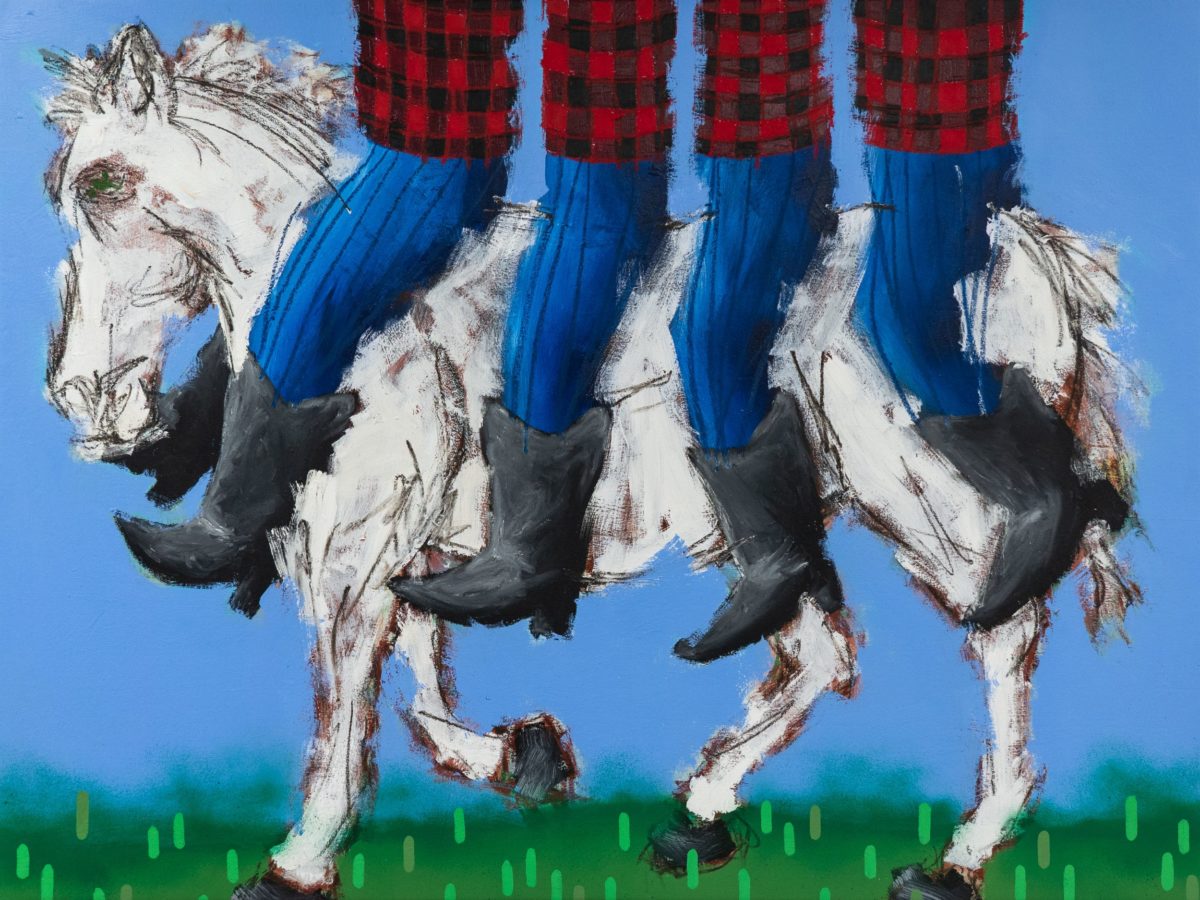 What’s the story behind the prison stripes outfit in You and Me and The Devil Makes Three?

I’ve never been to prison; I don’t care if people have, but it’s not my story, I’m not pretending to be this hard guy. The red and blue patches are supposed to be the angel of the devil on his shoulder. He’s clearly made some decision with the devil that’s got him in his prison stripes, and now he’s got to choose to either keep chasing the devil, or change. The yellow lines are the rainbow: the heat of the devil is clashing with the angel and making it rain in his own head. It’s a turning point.

What does the rainbow motif man to you?

For me it’s an instantly recognisable symbol of change: you can only get rainbows when good weather’s switching to bad, or bad to good. You can’t have a rainbow if it stays bad, or stays good.

Where’s your work going after this show?

I want to kill the cowboy. I visually finish them off at the end of this show. I’m in my comfort zone with those things now. It’s going to be same book, new chapter. I don’t want every show to just be a bunch of cowboys.

Hunter Potter, I Ain’t Half The Man I Wanted To Be

At Public Gallery until 29 February 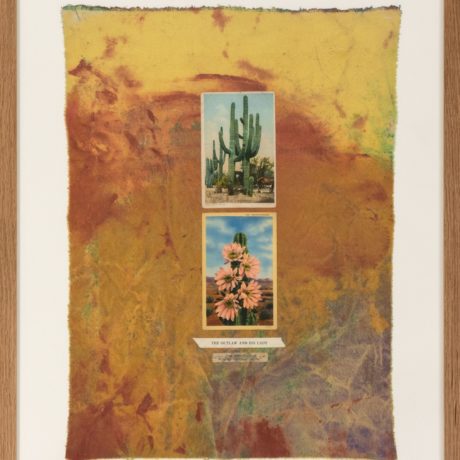