Growing up in Lancashire, the seaside at Blackpool was a focal point for our transitioning pursuits of pleasure: as kids, it was where we came to watch the Illuminations come to life each year, then a place to throw up blue slushies on rollercoasters when we were slightly older. As seventeen-year-olds, getting a driving license meant taking an overstuffed car to the beach and cramming as many friends as possible into a £4-a-night hotel room, sneaking more of us past the reception desk as the night wore on, bottles clinking in our handbags.

Most British people have a beach story of their own: mainland UK has 11,000 miles of coastline, and no matter where you are, you are never further than seventy-two miles from the shore. The seaside became a destination for holiday-making Victorians in the wake of the Industrial Revolution and the development of the railways, and in the mid-twentieth century its popularity grew as a cheap vacation spot, easily accessible by day-tripper workers after their hard-won fight for the right to a weekly day off. At the National Maritime Museum in Greenwich, photographs taken from the 1960s until today showcase how changing demographics continue to perform unchanging rituals of amusement at the British seaside.

Organized by photographer and roughly chronologically, the exhibition opens with the work of Tony Ray-Jones: a black and white sequence including several new prints of negatives never before publicly exhibited. Credited as a significant figure in transforming the scope of British photography in the 1960s, Ray-Jones’s practice settled on studies of Brits at leisure. His book, unfinished before his death at just thirty, was published posthumously as A Day Off: An English Journal. These are the playful, wry and affectionate shots of an artist concerned by what he considered to be a culture in danger of becoming extinct: “For me there is something very special about the English ‘way of life’ and I wish to record it from my particular point of view before it becomes Americanised and disappears.”

“These are the playful, wry and affectionate shots of an artist concerned by what he considered to be a culture in danger of becoming extinct”

Ray-Jones’s contemporary, David Hurn gained a reputation photographing celebrities in the 1960s, but felt pulled back to his native Wales and spent a year travelling in a van around the country. “I find the word ‘documentary’ a bit misleading, to be honest,” he tells me. “I think the word ‘reportage’, or even ‘journalism’ would be a bit more appropriate, in the sense that for me, taking these photographs is simply a way of keeping a record, just as I find it.” His seaside pictures show miners and mill workers on their days off, building sandcastles, sharing sandwiches and taking naps by the sea. One of the most notable shots shows a big group, fenced off from the rest of the beach by a mighty circle of windbreakers. Hurn reveals that he knew this group all lived on the same street: they travelled by train together and ensured a shared spot on the beach. This personal perspective is at odds with the more anthropological stance of Martin Parr and Simon Roberts, positioned in the exhibition as the inheritors of Ray-Jones’s and Hurn’s roles as cataloguers of the British at leisure.

Parr’s section of the galleries will be the inevitable pull for the exhibition: his long-established reputation as the definitive researcher of British tastes and behaviours makes the seaside a prime hunting ground. Alongside some familiar classics—frank, colour-drenched shots of seagulls pinching chips and children smeared in pink ice cream—are twenty pictures from a new series commissioned by the Maritime Museum. These images, Parr says, focus on the ethnic and religious diversity of Britons enjoying the seaside: “I find it charming that here are these people from all religions and cultures, coming to the beach to engage in these very British activities.”

Ultimately, the results of this commission seem to assuage Ray-Jones’s fear of Americanization: in fact, Parr’s images show the British seaside steadfastly retaining its cultural foothold. Perhaps one or two pictures are taken with a telephoto lens, an approach Parr has just begun to explore, but for the most part they engage at close, curious range with their characters of interest. Simon Roberts’s pieces, by contrast, are grand tableaux: hundreds of figures dotted across coastal land and seascapes. With a more restrained palette than Parr, his pictures have an almost painterly quality, showcasing much more than the other three photographers the natural aspects of the seaside. “I was a geography student in Sheffield,” he tells me. “For me, these images tell me as much about our changing economies, how we harvest energy and the ways we control and harness the landscape as they do about how people like to spend their free time.”

“Optimism is at the core of the exhibition as a whole, capturing a reserved nation at play”

The exhibition pivots around nostalgic paraphernalia of the seaside: video clips of the artists are housed in a giant MDF beach hut, elaborately curled white iron benches and oversized deck chairs are dotted around the galleries—there’s even a stuffed seagull or two. Is it possible that the exhibition fails to engage with other realities of the British seaside? The palpable division in many seaside towns between vibrant seafronts and downtrodden town centres speaks of more serious problems of social immobility and discord. The beach is, of course, the place where the land meets the sea, and where our status as an island nation is most evident—where, as Parr puts it, you can see “British life literally fraying at the edges”.

It is surely not too great a reach to find a political narrative in an exhibition of this kind: some of the strongest Leave votes in the Brexit referendum were based around the places fixated upon throughout this exhibition. Kristian Martin, the exhibition’s curator, cheerfully rejects my scepticism: “I am actually incredibly optimistic about the future of the British seaside. Throughout the eighties, nineties and early 2000s we did see a period of decline that was quite apparent, but now I believe we are seeing a regeneration and rejuvenation of these places.”

This optimism is at the core of the exhibition as a whole, capturing a reserved nation at play: Britons knitting, boozing, copping off, wearing suits and doing other weird stuff on beaches. Long may it last.

Until 30 September at the National Maritime Museum, Greenwich 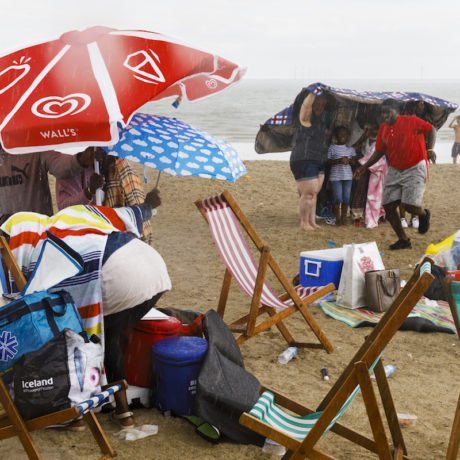