To be frank, I’ve never really understood abstract art, or why someone would rather paint shapes than people. It’s also perhaps a stark fact of our times that we need to understand things, especially each other, and abstractness seems inappropriate and oblique. But Farah Atassi, in her own words, makes “figurative paintings that represent abstraction”, a vocabulary that fuses the language of these two usually opposed modes of painting, hesitating, as she puts it, between “sign and figure”. The result? Well, see for yourselves. She has a show opening in Paris at Almine Rech this month, showing 12 new paintings designed specifically for the gallery spaces there. Almine Rech have a penchant for young female painters who are excelling at their game and Atassi is definitely of that ilk. (Charlotte Jansen)

There is a tender whimsy to the paintings of Minami Kobayashi, as if they were sketched hastily on a summer’s afternoon alongside a loved one. The artist works most frequently with watercolour and egg tempera, shopping at the local grocery store for the yolk to mix through her palette—“both are transparent and dry very quickly, so fit for expressing transience,” she reflects. Kobayashi grew up in Japan, studied Fine Art in Tokyo and now lives in the United States. Influenced by comics and anime from her childhood, she creates scenes that feel fleeting and isolating, conjuring as much an introspective, personal state of mind as the experience of moving through the world. A selection of Kobyashi’s paintings are currently on display at Stems Gallery (3 September to 10 October), opening as part of the citywide Brussels Gallery Weekend. (Louise Benson) 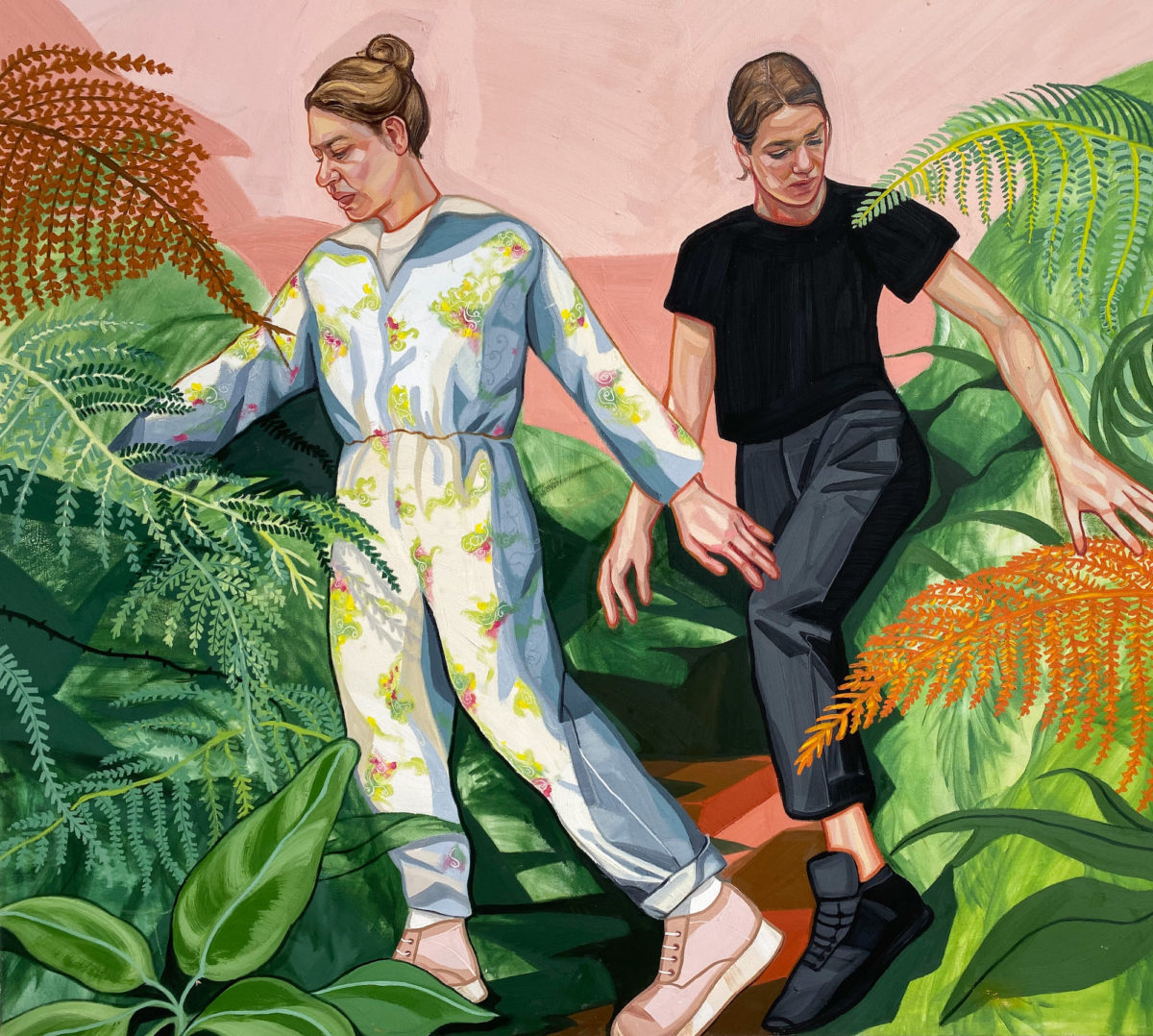 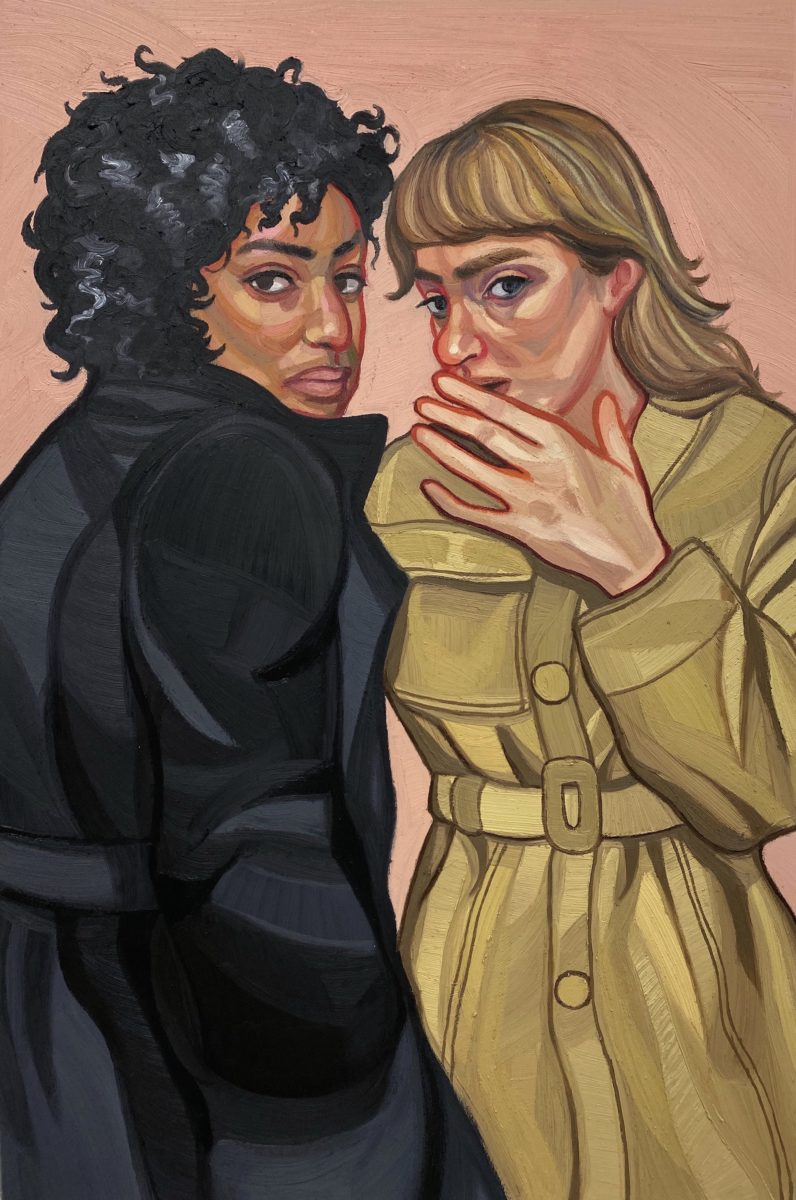 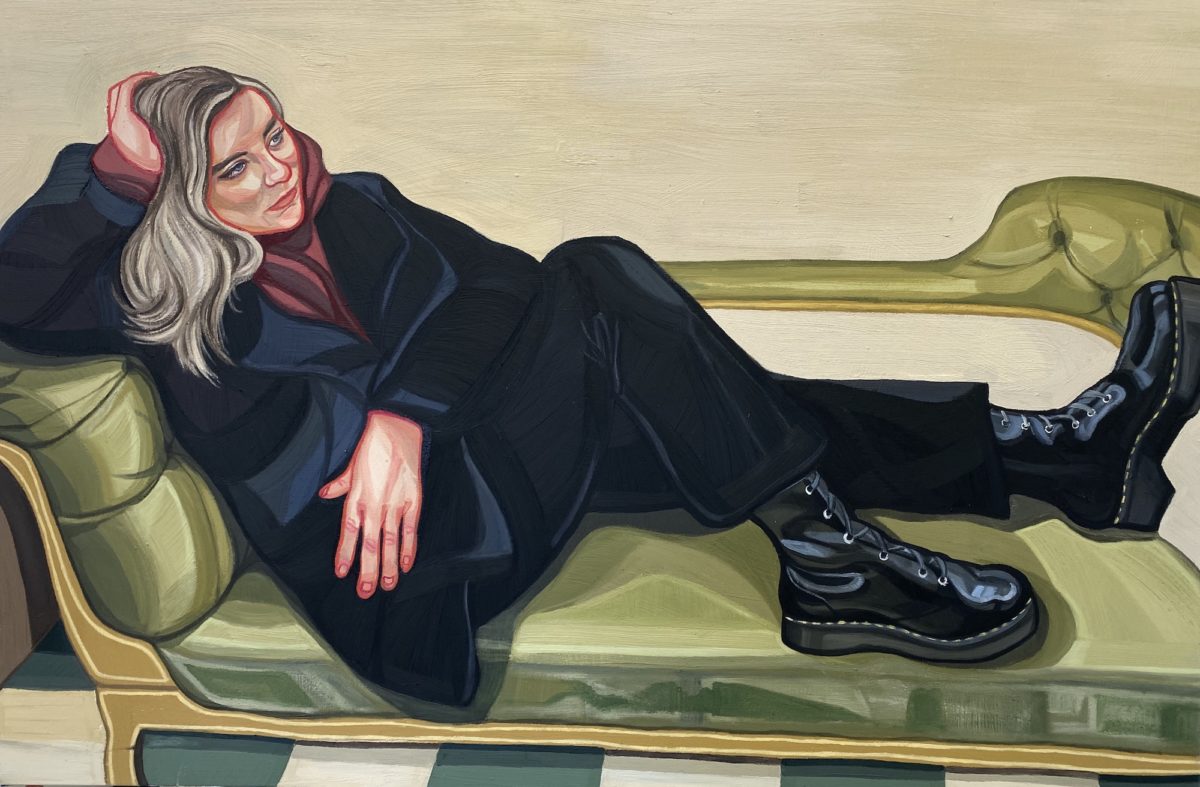 The women in Ania Hobson’s paintings always look a tad disgruntled, but that is no bad thing. Rather than adhering to traditional compositions that present her subjects in a “stereotypical feminine way” she focuses on naturalism that revels in an unglamorous bluntness. Figures smoke cigarettes, wear thick coats and heavy boots, and often treat the viewer with an air of suspicion, as they slouch in foreshortened frames. Hobson won the Young Artist Award with the BP Portrait Awards in 2018, for A Portrait of Two Female Painters, which exemplifies her eye for strangely satisfying forced perspective. Her solo show at Catto Gallery in London runs from 5 to 23 September. (Holly Black)

Tako Taal is a Welsh-Gambian filmmaker, conceptual and visual artist whose work interrogates “the psychic structures of colonial relations, and the question of how vivid they remain in the present.” Based in Glasgow, Taal’s films use close, intimate shots to create narrative across a range of settings, from the limitlessness of the ocean, to the motion of a dancing body in Halo Nevus (2018). In You Know it but it Don’t Know You (2017), Taal brings together images of Gambian hospitality students with an overlaid narration of Mandinka words, provided from a list her grandmother wrote in 1986. The result is a deft social commentary, with the precision of the students’ manual work in the kitchen softened and lyricised by the words above. In Taal’s hands, a simple act like mopping the floor becomes rhythmic, her close shots capturing motion and care. Taal’s work also tackles the political landscape in Gambia, often using presidential politics as a framing device, before then veering into the how national identity is shaped in the wake of volatile power structures. Taal was recently selected as part of Jerwood Arts’ Survey II, a group exhibition which will tour the UK in 2021. (Ravi Ghosh) 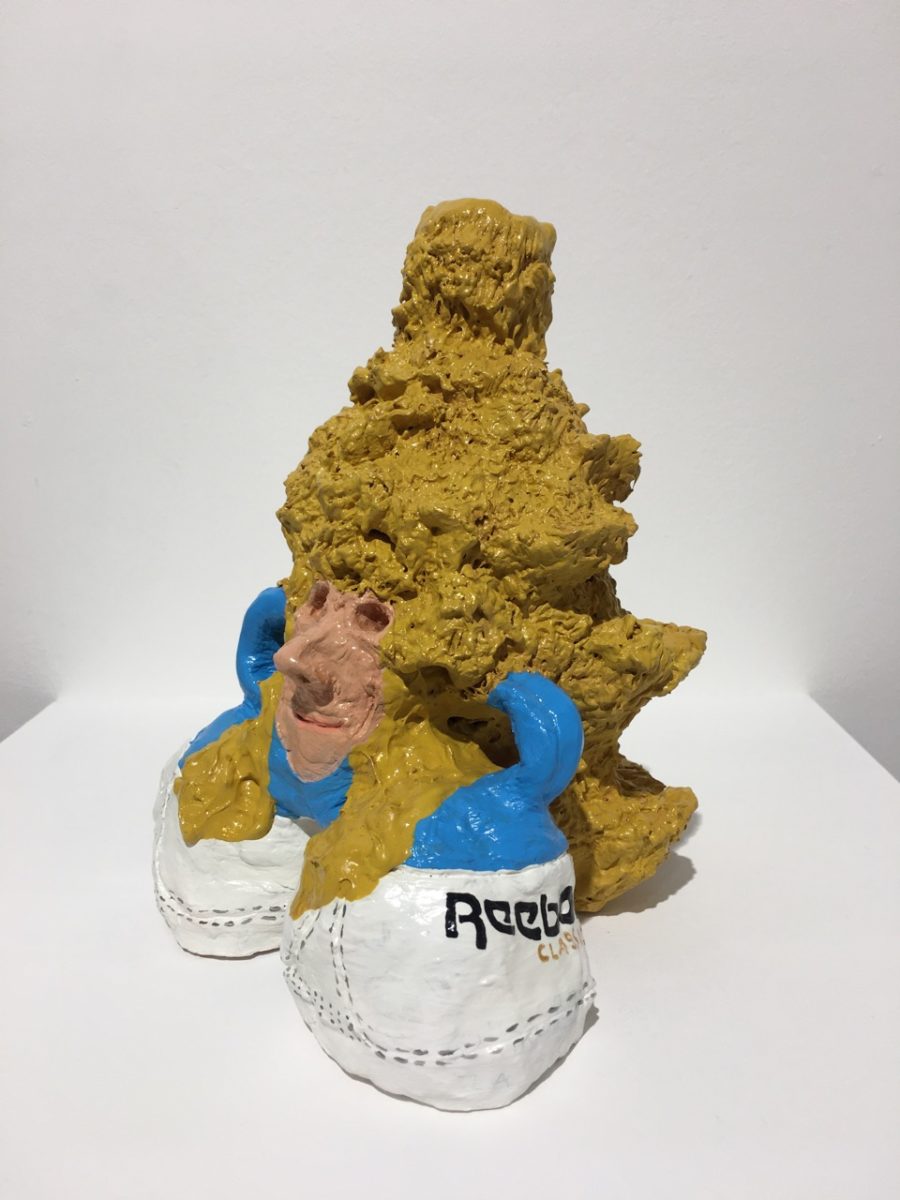 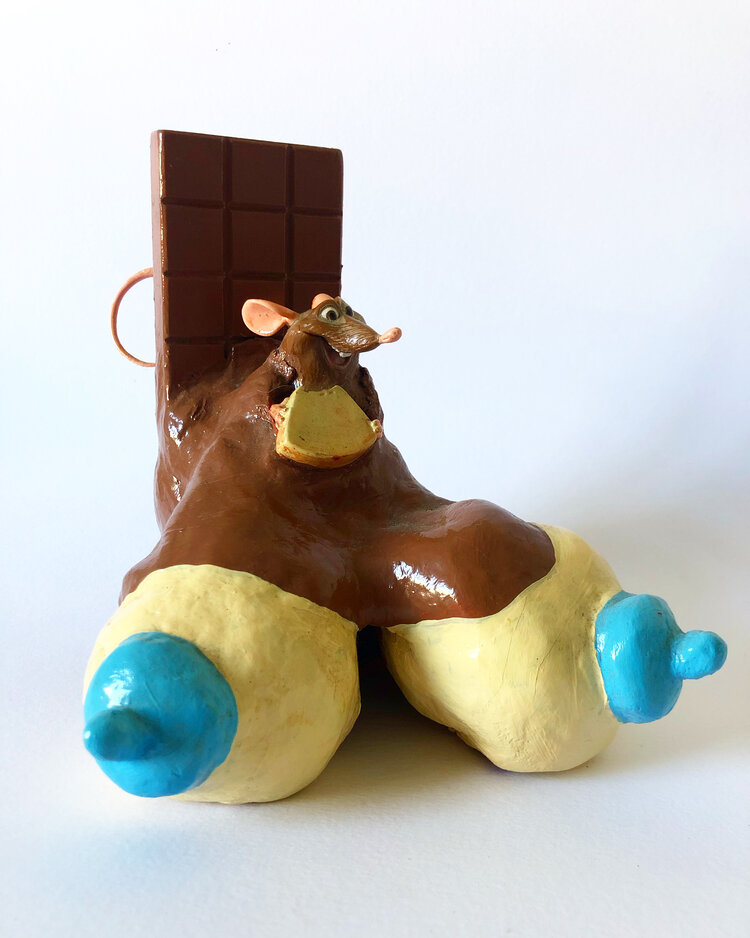 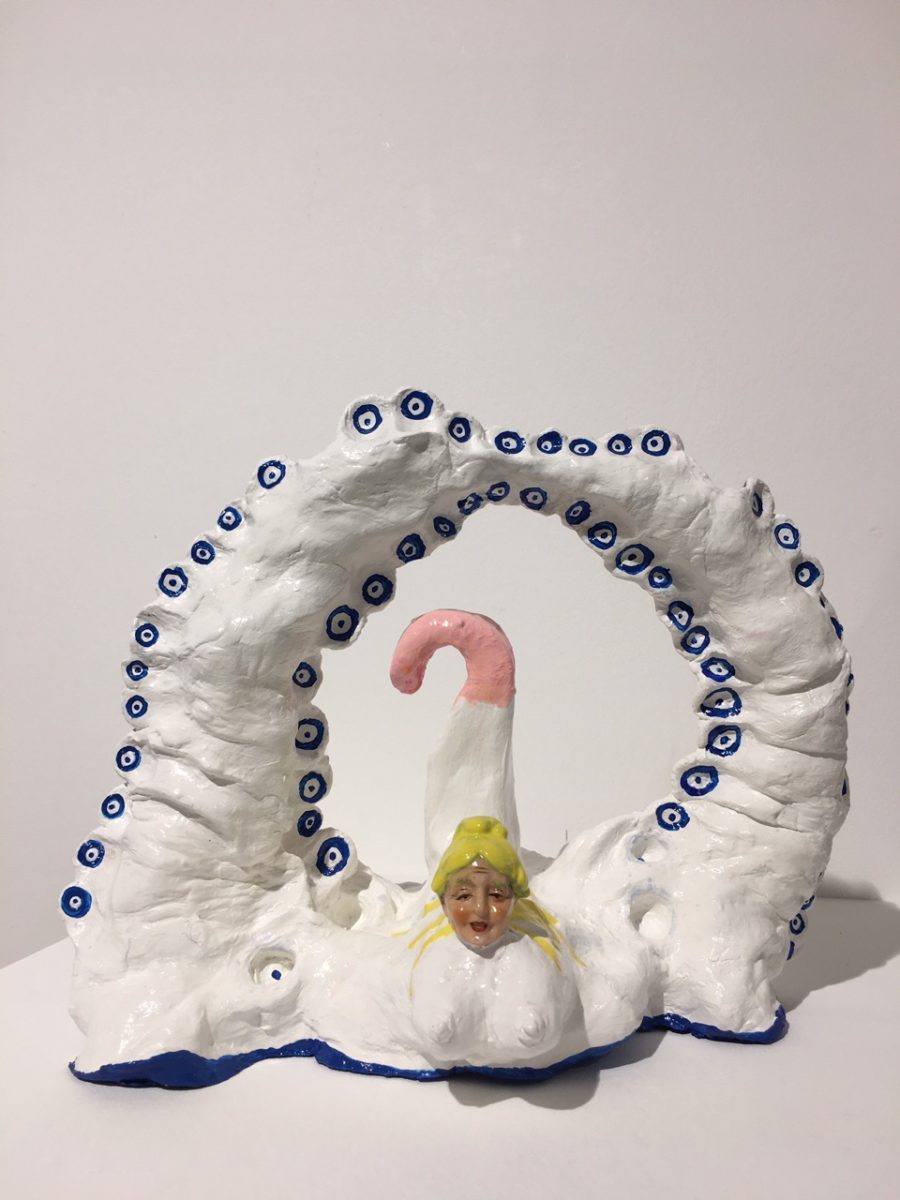 I had a horrible habit as a child of burning the hair of my trolls on a light bulb. I don’t really know what I was trying to achieve but it smelt bad and it felt good. I like to think it was my still nascent psyche rebelling against the traps of capitalism. Anyway, the scent of scorching synthetic hair is what came to mind when I first encountered the work of Kate Merry, which was very recently, at TJ Boulting’s current group exhibition on clay. Neon colours and spoof Kappa signs are so 90s it hurts, but that was the decade I was torturing my trolls so I can relate. Sublimely strange art from a supremely talented gal. (Charlotte Jansen)

Amoako Boafo paints in a manner that renders Black skin almost liquid, filling his surface with fluid lines of brown, red and ultramarine, and building images that feel intimate yet somewhat disembodied. Since being “discovered” on Instagram by Kehinde Wiley, the Ghanaian painter has received widespread acclaim, winning the Walter Koschatzky Art Prize in 2017, collaborating with Kim Jones for Dior Men, and smashing the estimate for his painting The Lemon Bathing Suit (the first to ever go up for auction) more than ten times over. In his first solo exhibition with Mariane Ibrahim (until 24 October) he brings together never-before-seen works that consider the notion of autonomy and self-reflection in a time of crisis, while utilising a form of photo transfer to incorporate slices of European wallpapers to open up new dialogues between figuration and abstraction. (Holly Black)

Cat and Éiméar McClay are among the 36 artists featured in the 2020 Bloomberg New Contemporaries, and for very good reason: their website’s homepage alone is one of the most bonkers, beguiling, infuriating and brilliant things I’ve seen in a long while. The McClays’ work uses video, 3D models, digital collage and installation pieces to examine ideas around queerness, abjection and patriarchal power systems with sharp wit and beautifully absurdist humour (see the human finger chairs in Queer Use, for instance). The unequivocal jewel in their crown, though, is a video titled Charles Saatchi’s Having a Rave!, which stars three dogs. One, a portly labrador, is Saatchi, who is frantically trying to salvage a melted blood sculpture. Enter Marc Quinn and Damien Hirst (also dogs), getting mashed up at fundraising rave. Going out on a limb a bit here, but this is probably the best video I’ve ever seen. (Emily Gosling)

A Tamil American illustrator, Nabigal-Nayagam Haider Ali’s characters reach excitedly out of the page. Taking inspiration from South Asian religious epics and iconography, he fuses an attention to detail with luscious colour palettes, evoking the decadence of Indian culture and the contemporary elements of illustration. There is a relatability to the personas depicted that makes his work even more enjoyable, stemming from a desire to represent characters he would have liked to have seen as a child. Exploring identity is a key component of Haider Ali’s practice, as the artist gently navigates topics of gender, sexuality and religion with shrewd focus and whimsical sensibilities. (Anoushka Khandwala)

Ohio-born, Nashville-based, Grant Gasser works across art, design, film and photography, and is currently a graphic design intern at Third Man Records. His abstract-leaning publication designs caught my eye a while back with the release of 2019 zine and exhibition Hebel, which used its design to suggest a perspective in which vanity (or “hebel” in Hebrew) is “less about narcissism and more about ephemerality.” His new book Archipelago showcases his deft use of type and knack for creating striking layouts with a very limited colour palette. The book uses Gasser’s own abstracted images and photographs as an exploration of the idiom “no man is an island”, delving into “the complicated communal identities we divide ourselves by,” as the artist puts it. The weathered feel of the pages and use of multiple layers that both reveal and obfuscate look to mimic  “the density of physical and emotional distance from others and oneself,” says Gasser. (Emily Gosling)

In 2021, ten artists who are still in the first five years of their practice will take part in a touring exhibition from Sheffield to Cardiff and London, for Jerwood Arts’ Survey II. They have all been selected by leading UK artists, including Jonathan Baldock, Tai Shani and Heather Phillipson; Polish artist Katarzyna Perlak has been selected by Zadie Xa. Perlak was previously included in New Contemporaries for 2017 and graduated from the Slade the same year. Her work spans video, performance, sound and installation, and she is driven by “politics and feelings”, examining queer narratives, migration and the possibility of archiving historical moments in her lively, often aesthetically flamboyant works. She also has a strong focus on craft, recently exploring the methodology of “tender crafts”, alongside notions of utopia and hope. (Emily Steer) 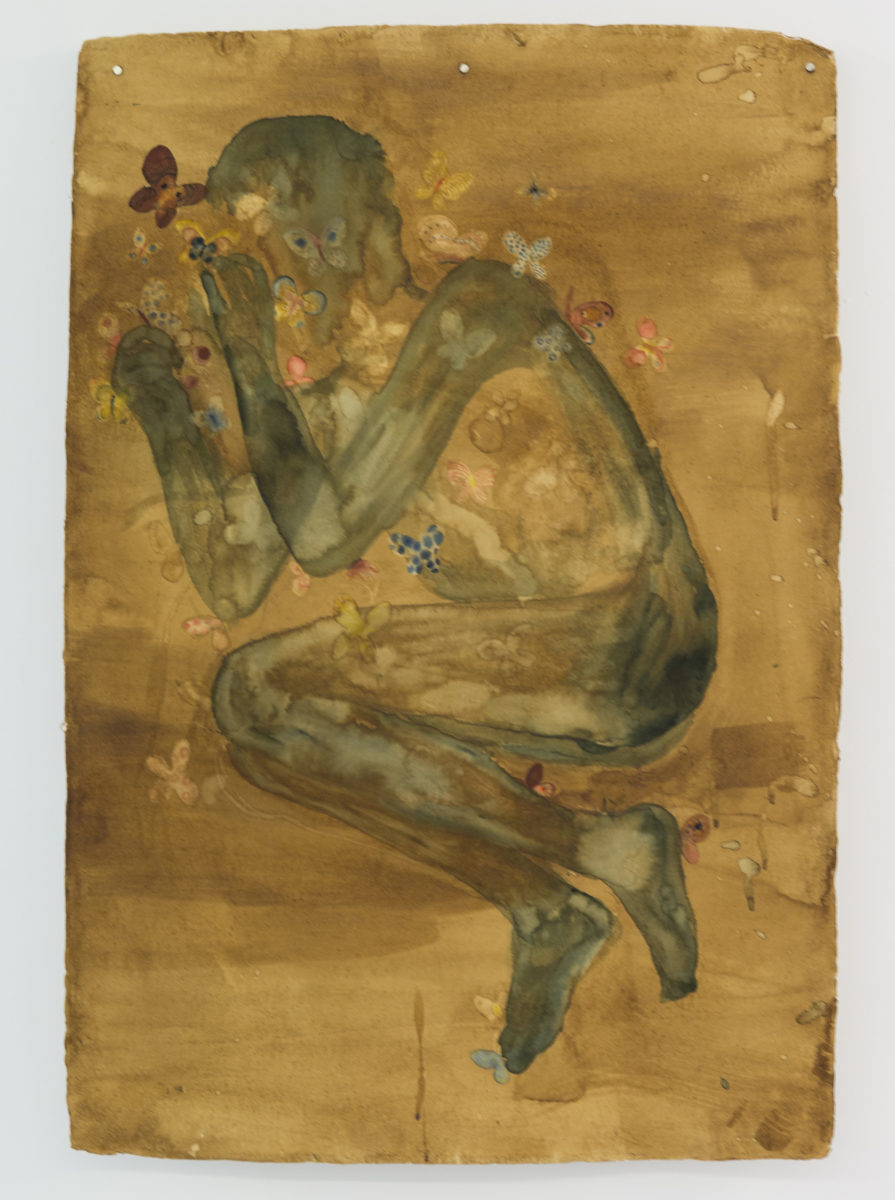 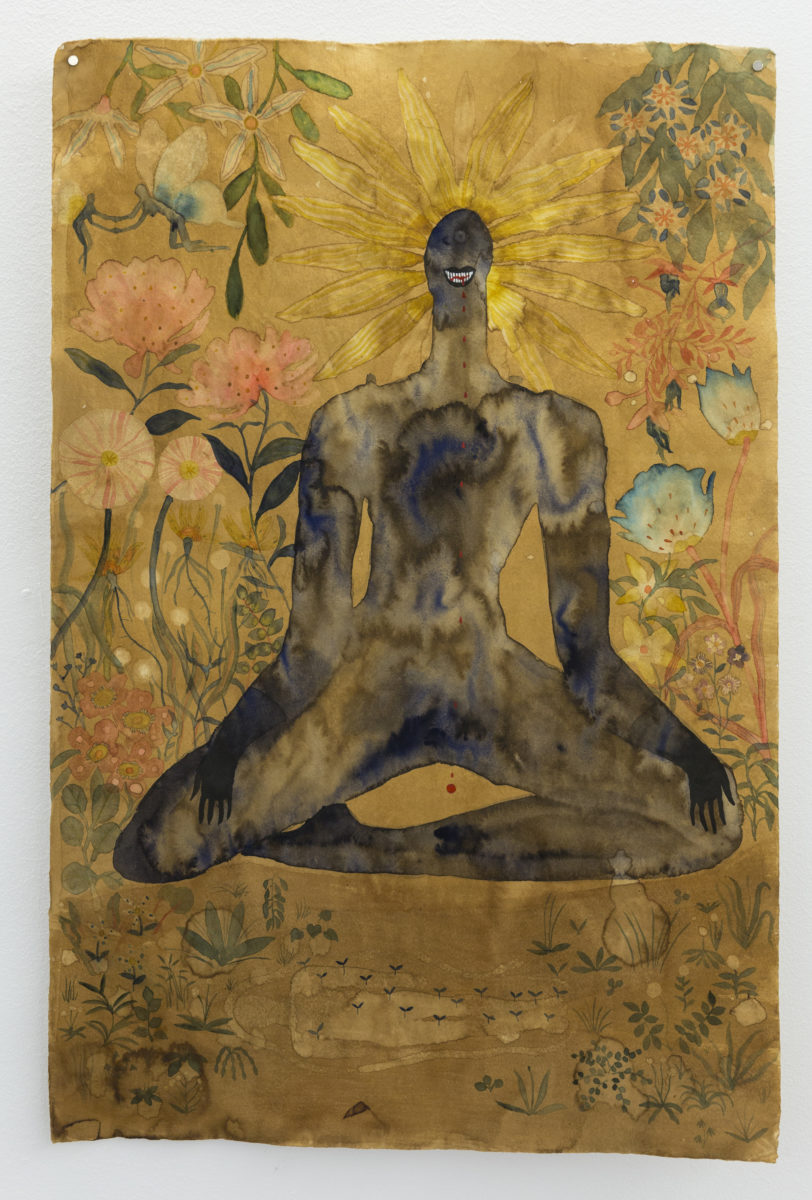 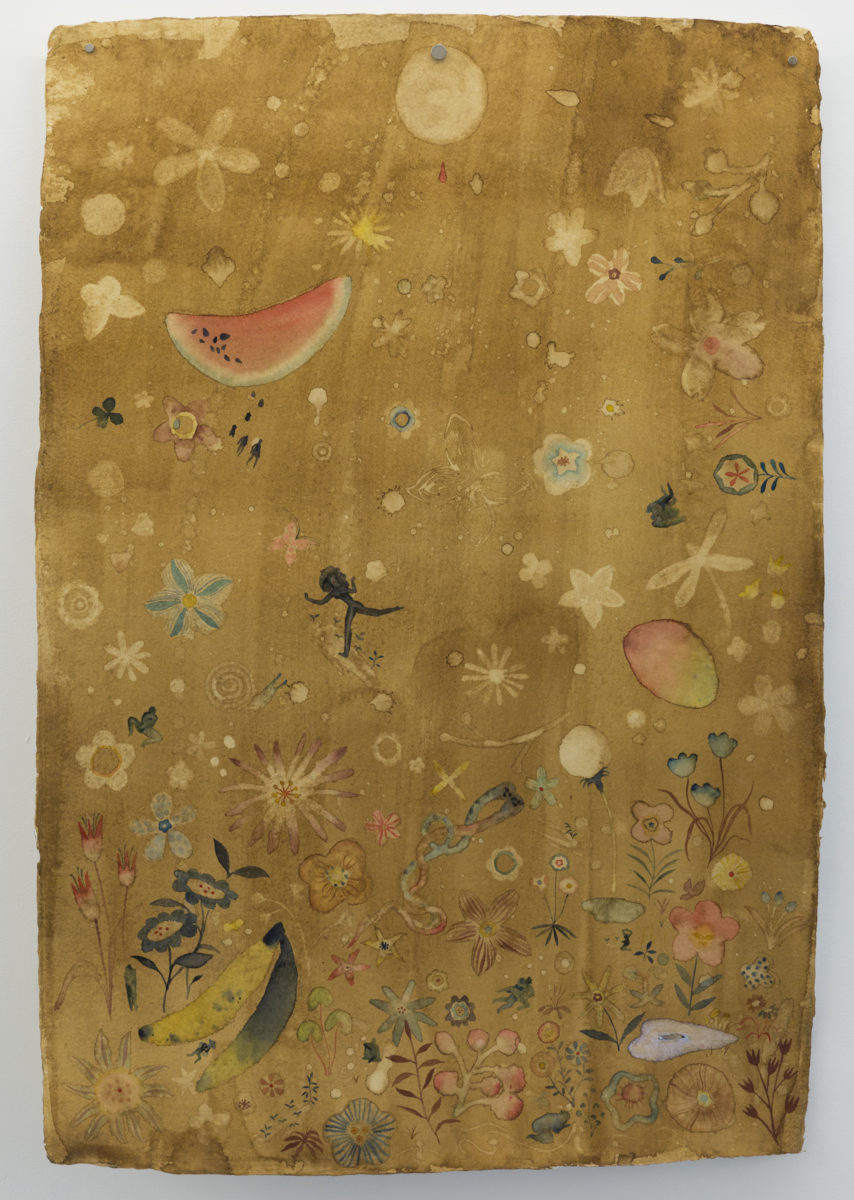 Did Chioma Ebinama predict the pandemic? By her own admission, “In 2019, I wished that there would be a global catastrophe that might put the world on pause.” Only days after her solo show opened at The Breeder gallery in Athens—the works, eerily, had titles like Making Out While an Empire Burns and The Goddess of Nothing—the world did shut down. Now her show, the result of an open studio in the gallery space earlier this year, is open once again, with delicate works created during quarantine in Greece. The artist refers to them as “mandalas” in which you can trace delicate paths to the cosmic and the spiritual. An enlightening artist who brings the wisdom of her multicultural existence into her visual language and aura. (Charlotte Jansen)

Tom Worsfold jumps lithely between different inspirations to birth canvases that heave with surreality. Utilising both drawing and painting as primary forms of imagemaking, he patches together doodles of blocked plug holes or sketches of spoilt children, resulting in visuals that simultaneously enrapture and bewilder. By dwelling on the ordinary, Worsfold’s creations transcend mundanity. You can find his exhibition The Sleepers at Block 336 from 17 September to 24 October, which sees a renewed focus on the body. Depicting monumental and melancholic figures, the gallery states that they “express a sense of anxiety and alienation that is not merely a 21st century condition.” This recent iteration in Worsfold’s practice seems well worth a trip outside our pandemic-confined homes. (Anoushka Khandwala)