If there was a prize for enduring social awkwardness, Pilvi Takala would surely be in the running for it. The Finnish artist’s performance works (mostly exhibited as videos) often document social experiments: uncomfortable moments in which the seemingly intangible rules of interacting in public spaces are suddenly revealed to be rock-solid.

She frequently pokes a humorous stick at the way workplaces function. In The Trainee, 2008, Takala took a month-long internship at the accounting firm Deloitte, where she proceeded to do… absolutely nothing. But not the kind of nothing that most people do when avoiding work in offices: instead of scrolling social media, Takala openly and performatively made it clear to her colleagues that she wasn’t accomplishing anything, riding the lifts for hours at a time, or just sitting, staring into space.

For a more recent work, The Stroker (2018), she posed as a “wellness consultant” at an East London co-working space. There she provided “touching services”, greeting and gently stroking coworkers in the hallways. In both works, the non-confrontational but confused reactions of those she interacts with are what give the work its humorous bite. Who wrote the rules of these public workspaces (“Look busy!” “Don’t invade personal space!”) and why are they so unclear that no one can voice their disapproval directly?

Given her appetite for staring down sticky situations, I am not quite sure what to expect when I meet Takala in the Giardini of the 2022 Venice Biennale, where she is representing Finland. We slosh through the rain to find somewhere quiet to talk, but despite the umbrellas and endless downpour, people keep recognising her: four different people stop to say hi. Some of them, she recognises (like Tomo Savić-Gecan, who is representing Croatia, and invites her to the pavilion’s cocktail reception next door). Others, she doesn’t, and tells them so without a trace of embarrassment.

“Takala became embedded in the community of guards, and was forced to think about her stereotypes about who takes these jobs”

But then, being spotted by strangers comes with the territory when your face is on view in a video work just around the corner. This year at Venice, she performs in the multi-channel video exhibition Close Watch, For this, her interest in public spaces turned to those whose job it is to enforce the rules, by going undercover as a security guard in a mall for six months.

“The job is kind of easy to get,” she says. After just four weeks of training where she mostly learned about the law, as well as some fire safety and first aid, she had the job. “But there is very little practical training.” As long as she completed the course, Securitas were happy for her to carry out her artistic research by working for them. It was only her colleagues at the mall who didn’t know the truth.

Confronting the difficulty of the work, both physically and ethically, Takala became embedded in the community of guards, and was forced to think about her stereotypes about who takes these jobs: “I thought that most guards were power hungry: authoritative and conservative,” she says. But what stuck with her the most was how her coworkers went about creating a culture of trust amongst themselves, telling exaggerated stories of interactions, boasting about the force they used in interacting with the public, in order to create camaraderie. 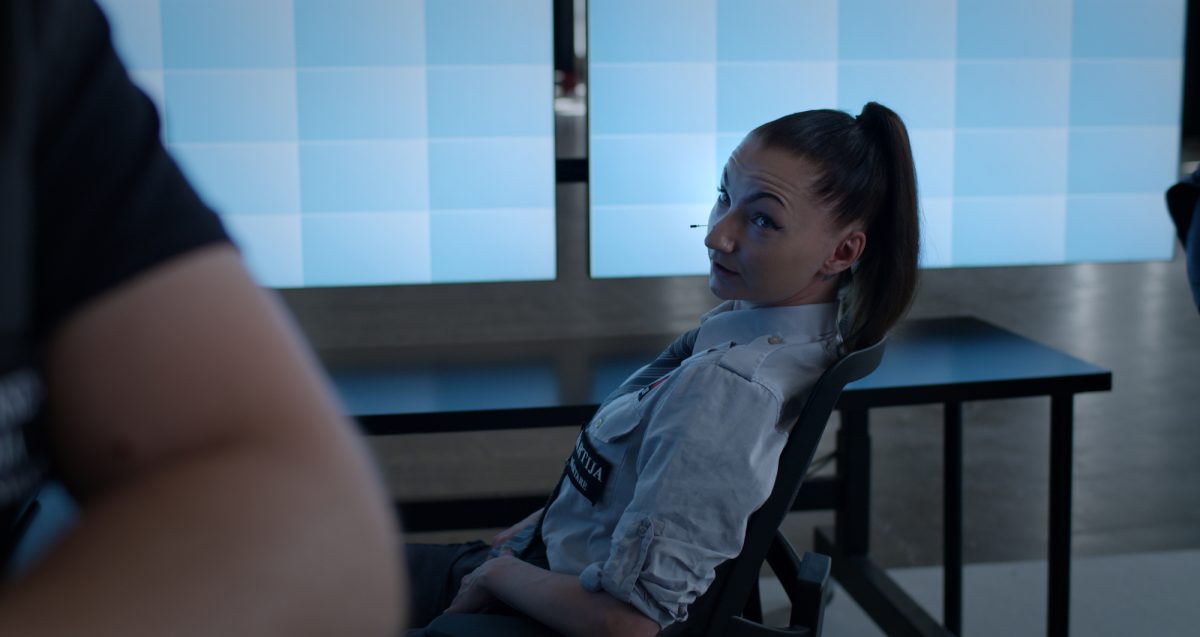 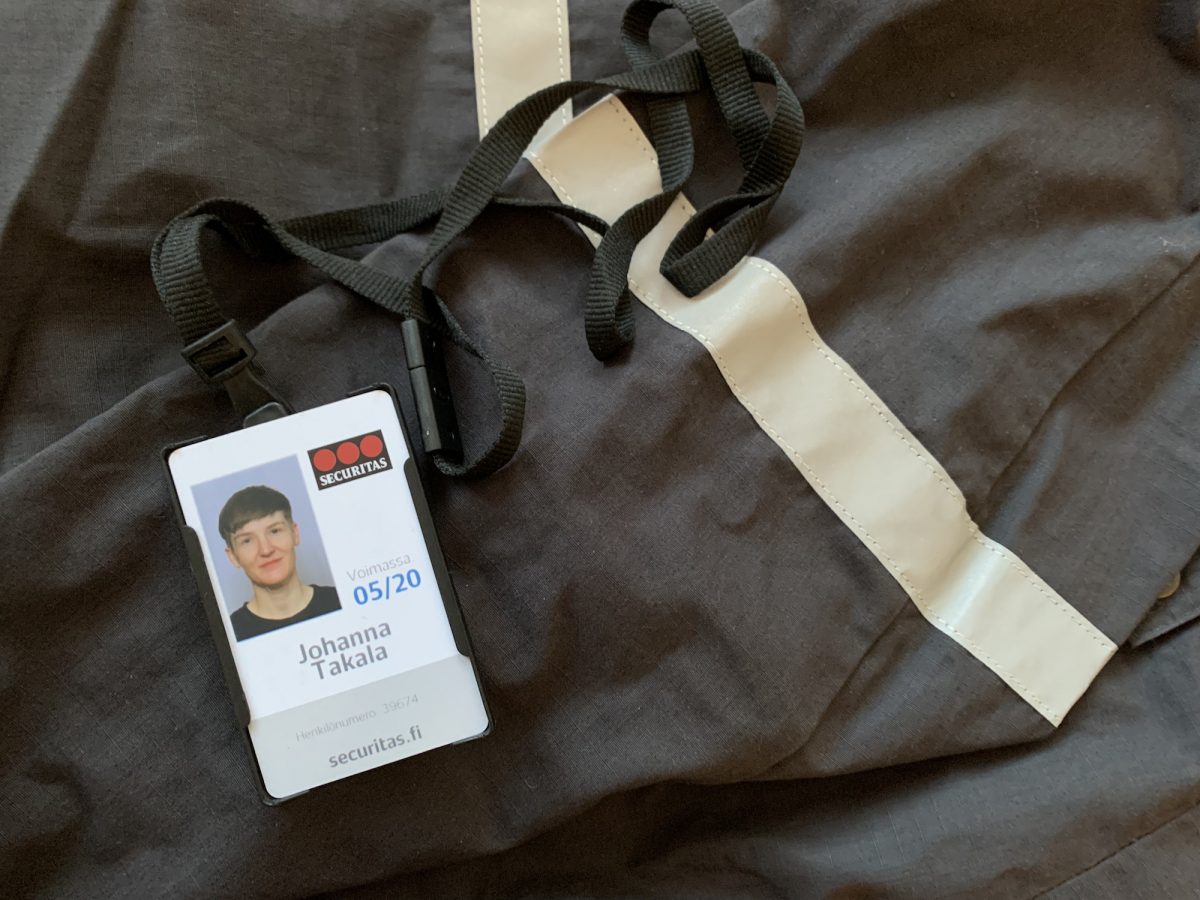 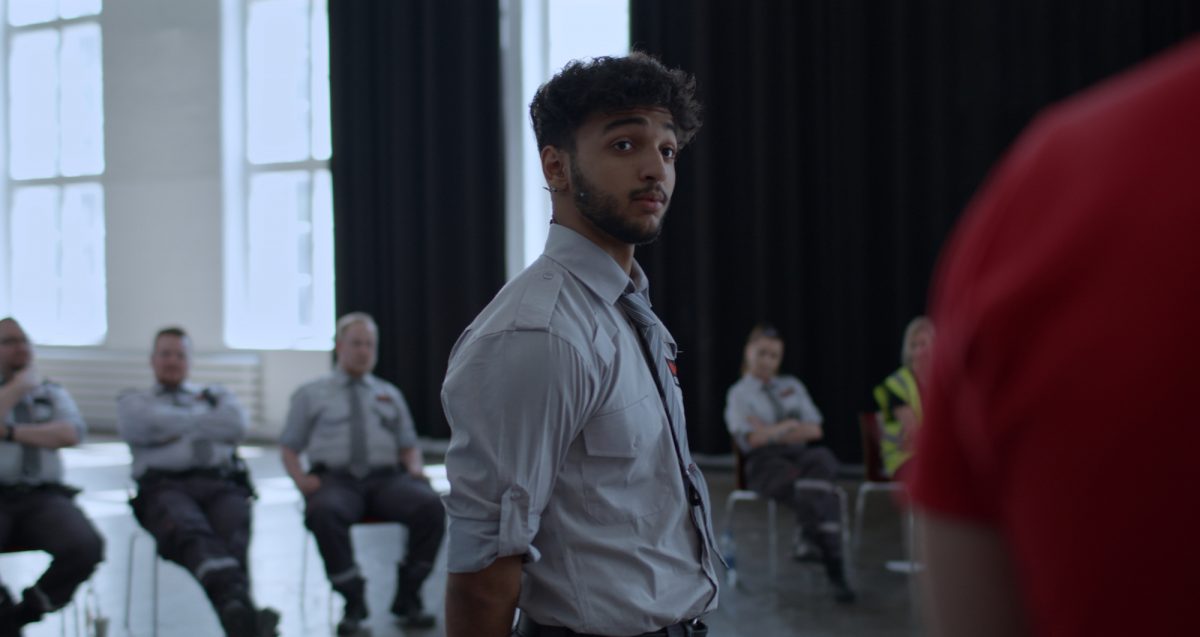 “They call it ‘war stories’, like where they’ll talk about an incident that happened, and the story is mega violent, which is supposed to be funny ,” she says, explaining her personal discomfort in these situations, which were designed to make colleagues laugh, whether or not these stories of their own misconduct are true. “But then, if that actually happened, it’s illegal.” In the resulting multi-channel film installation, Takala documents a workshop on power dynamics that she organised with her ex-colleagues and theatre pedagogue Annukka Valo. In the film, the guards try to work through the moral difficulties that the job brings up, but also often reiterate their need for group solidarity.

“Security responding to me has often been in the centre of the work. I sympathise with the person who has to do the job… it’s not fun”

These rationalisations also focus on how discriminatory concepts are embedded in the work culture Takala encountered. “There’s this idea that nobody’s racist, actually,” she says. “And everybody knows it’s bad to make racist jokes, it’s just a way to ‘de-stress’. But it doesn’t really work as a justification.”

The growing use of private security in semi-public spaces has resonated through Takala’s work. For example, in the 2009 video Real Snow White she documented her attempt to enter Disneyland Paris, dressed up as the cartoon version of the famous Grimm Brothers protagonist. Terrified of what this unofficial version of their Disney princess might do, guards immediately bar her from entering, even as children and adults swarm her for autographs at the gates. “Security responding to me has often been in the centre of the work,” she says, while acknowledging that as a white woman, she is treated less as a threat, and more as a nuisance. “I sympathise with the person who has to do the job… it’s not fun.”

She has also made work that involved potential security risks for herself. In Admirer (2018), she created a video that stemmed from a torrent of abusive social media messages she received from a single anonymous person. When it was shown in Finland’s Museum of Contemporary Art Kiasma, she was provided with a personal security guard who specialised in dealing with stalkers.

The challenge of maintaining ethical behaviour in a performatively macho work environment is at the centre of Close Watch. After she left the job (a departure prompted by one of her coworkers googling her and realising her cover story was fake), Takala conducted hours of interviews with her colleagues. During these discussions, the artist realised that many of her coworkers shared her moral qualms about the practicalities of the job, the way situations could escalate, and the difficulty of intervening in the heat of the moment.

Showing the work in the international content of Venice (though the exhibition will head to Finland’s Espoo Museum of Modern Art for its next outing), inevitably involves comparison to other security personnel, as the global conversation about the misuse of force in policing continues. “It’s very grounded in the Finnish context,” she says. “But, the issues are the same in any law enforcement: this phenomena of ‘us and them’, and ‘don’t interfere’. Protecting your colleague becomes important.”

And yet, having experienced the challenge of acting ethically without adequate support herself, Takala is keenly aware of the difficulties for her ex-colleagues who are acting within the flawed infrastructure for creating safe public spaces. As both insider and outsider to the group, Takala’s Close Watch opens up negotiations around power and force that are, as the work shows, normally confined to behind the scenes. As she walks away from our interview, blending into the crowd on Venice’s via Garibaldi, I wonder: where is Pilvi Takala going to infiltrate next?

Josie Thaddeus-Johns is a writer and editor covering art and culture with a tech slant, currently living in Cambridge, Massachusetts 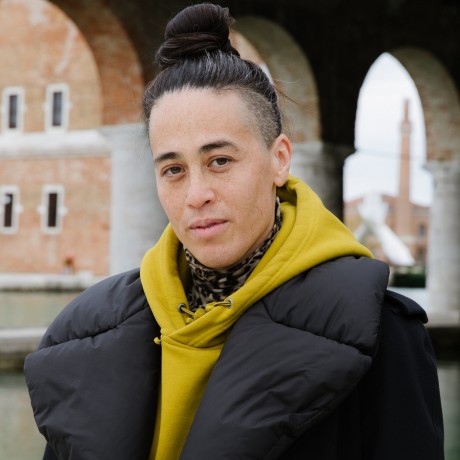