A protégé of the Moroccan master Hassan Hajjaj, the twenty-something Ismail Zaidy has a tender, sweet gaze. This is perhaps because his subject is his own family, usually his younger brother and sister, and his studio is the roof of his home in Marrakech. Using a consciously Instagram-aesthetic and shooting on his Samsung Galaxy S5 phone, Zaidy is part of a new generation of photographers who are interrogating their own spaces for the things that make them unique, while consciously working against North African and Arab stereotypes. He embodies a universal kind of photographic style: pastel-hued skies, fabrics billowing in the breeze, and minimal landscapes. Zaidy clearly understands how to take a good photograph and how to use colour to emotive effect; it’ll be interesting to see how his art grows out of Instagram now he’s found support from some of his predecessors. Ismail Zaidy’s solo exhibition is currently showing at Riad Yima, Marrakech. (Charlotte Jansen) 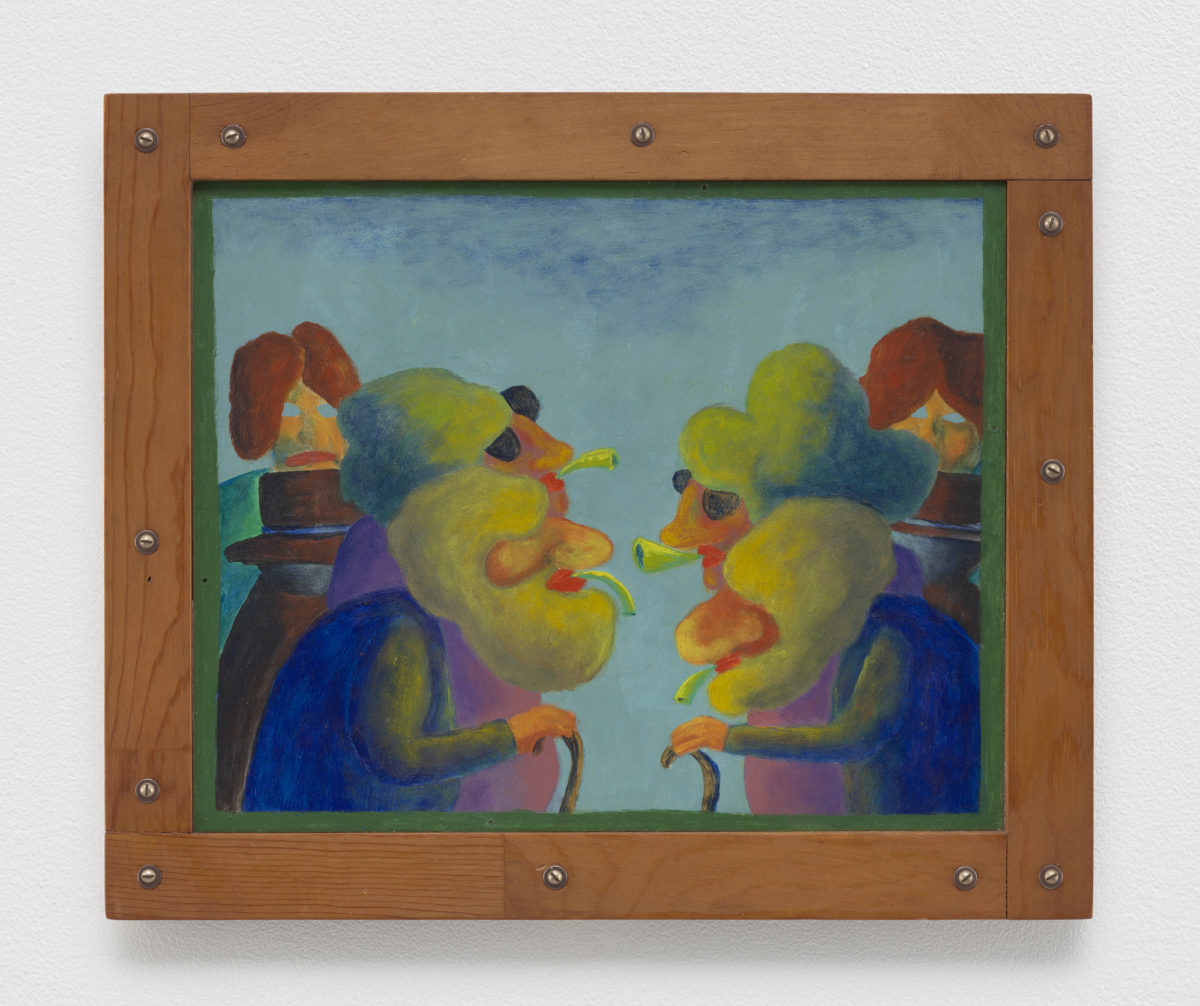 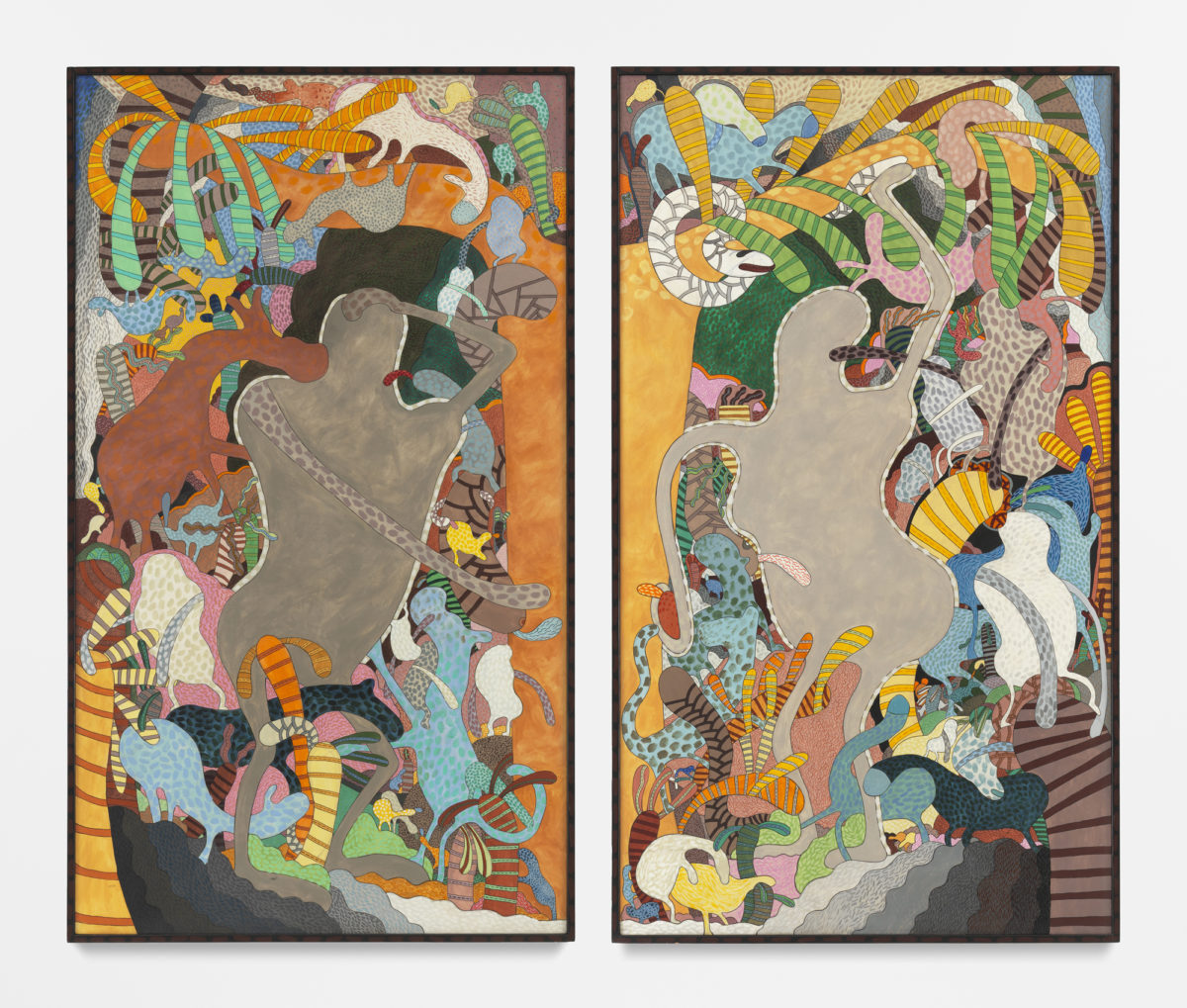 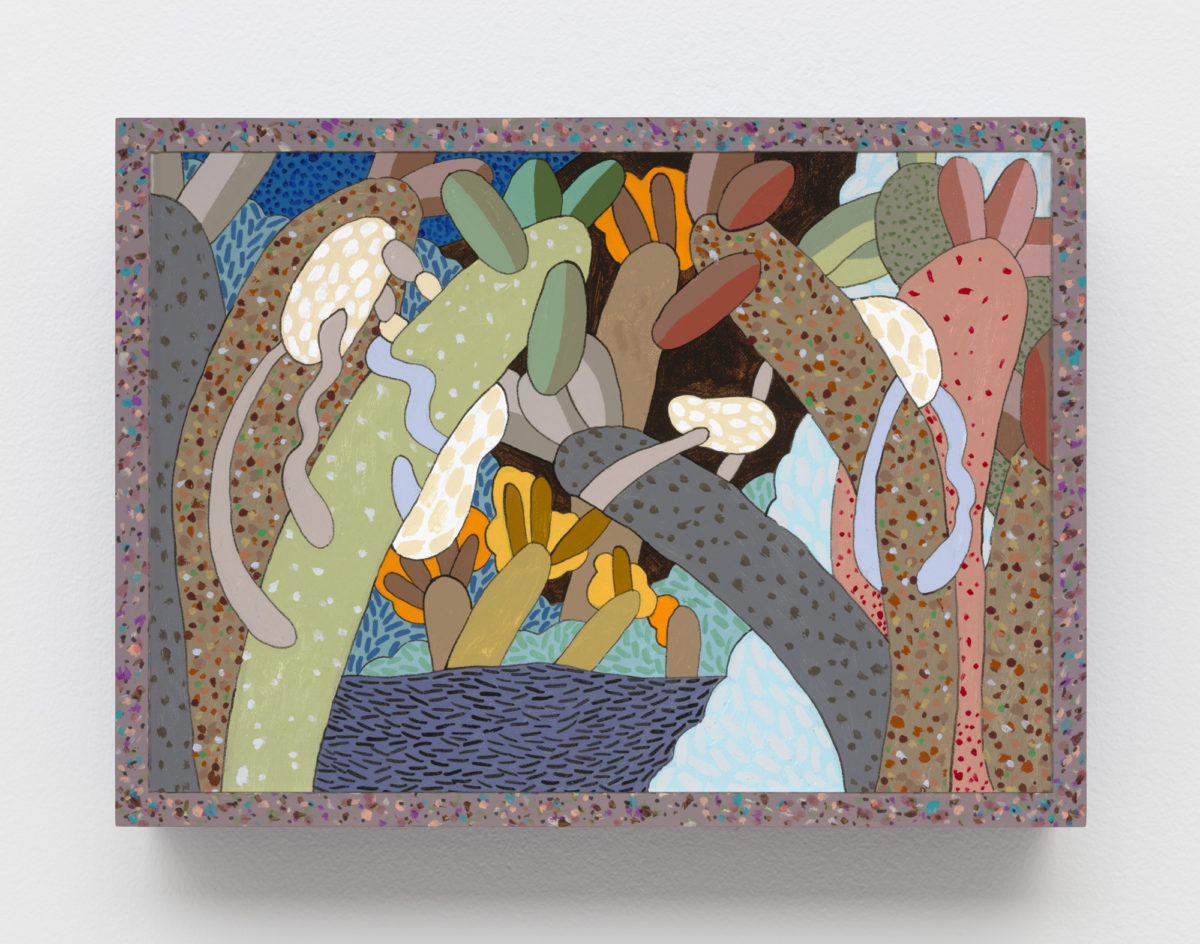 The colourful, graphic world of Gladys Nilsson has been firmly established ever since her participation in the artist group the Hairy Who, who came to prominence as part of the Chicago Imagists movement in the mid-1960s. Characterized by their irreverent melding of fine art, illustration and popular culture, this playful outlook can inevitably be found in Nilsson’s own output. Her paintings, often created on Plexiglas, abound with graphic figures, animals, mysterious creatures and even cavorting plants. Nilsson has been active as an artist ever since the 1960s but her work is currently experiencing a new renaissance, following a solo exhibition last year at Rhona Hoffman in Chicago. The largest presentation of the artist’s work to date is currently on show at Matthew Marks in New York (18 April), titled Gladys Nilsson: Honk! Fifty Years of Painting. It brings together more than forty works made between 1963 and 1980, which teem with the wild workings and fantastical imagination of an abundantly creative mind. (Louise Benson)

Nye Thompson bills herself as an “ artist turned software designer turned artist”. She explores the emergence of new tech-based paradigms, and how machines are quietly transforming the world we live in. Thompson graduated from Goldsmiths in the era of the YBAs, and soon found herself using her art practice to work with the world wide web. She spent twenty years designing software that focused on how digital interfaces facilitate human and machine interactions, before returning to art in 2012. Her work combines conceptual art and software design. Thompson is currently working on a piece called /artefact commissioned by The Lowry for its WEEK 53 festival. In it, she looks at how data and digital interfaces have rapidly become “instruments of power and ownership”, and takes viewers on an unusual visual tour in space. (Emily Gosling)

Eric Shaw’s work combines the lineage of twentieth century, pop-art abstraction and post-digital ways of approaching familiar icons. The artist, based in Brooklyn, is currently showing twelve new works at his solo show Over Here at The Hole in NYC, with each image a beguiling, brain-frazzling combination of bold tones, intricate line work and half-formed patterns. It’s joyfully nigh-on impossible to get your head around them. The works marry the unfamiliar with images from the lexicon of everyday life, like logos and street signage. These become all the more mind-boggling in juxtapositions of mathematical, geometric precision, together with a sense of playful improvisation. Shaw works by first sketching images on a basic drawing programme on his phone, before taking them onto the canvas, then often returning to the screen to modify them before finalising the physical works. (Emily Gosling)

Rahima Gambo is best known for her ongoing collaborative documents of north-east Nigerian schoolgirls in the aftermath of the Boko Haram conflict. But more recently her work has focused on taking pictures without using a camera, and without an agenda. Using the perambulatory action of photography, she sets off on directionless walks, whether it’s around her hometown of Abuja, or Lagos, Marrakech or Maiduguri, responding intuitively to her surroundings by collecting things she finds along the way. She then creates elegant organic sculptures, which are reminiscent of Alexander Calder in their delicate nature. These pieces, and the accompanying lo-fi videos of her walking, constitute a new way of looking. She doesn’t try to represent a place as it is but to reassert the subjective, abandoning her background as a journalist in favour of a more physical and personal interaction with place. (Charlotte Jansen) 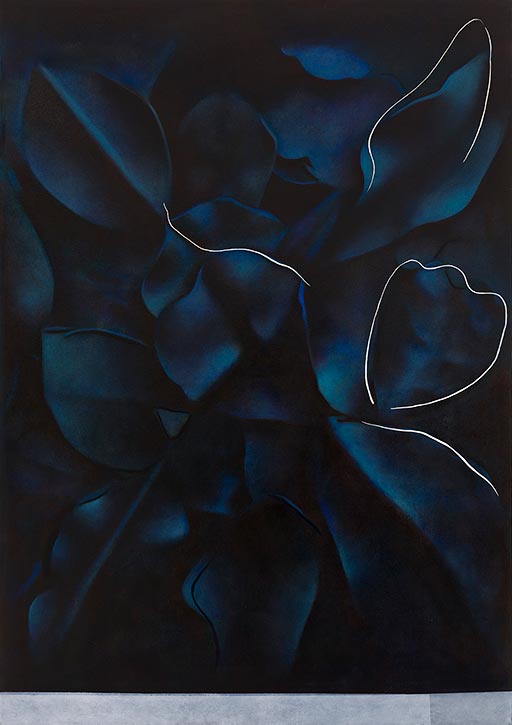 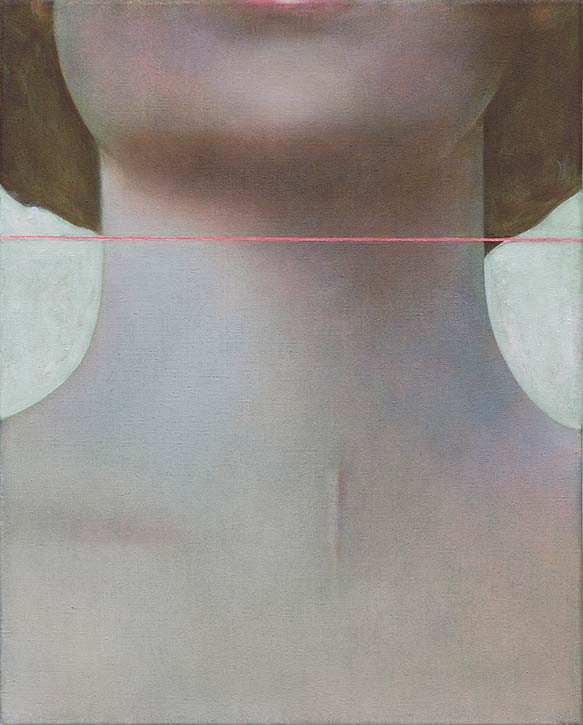 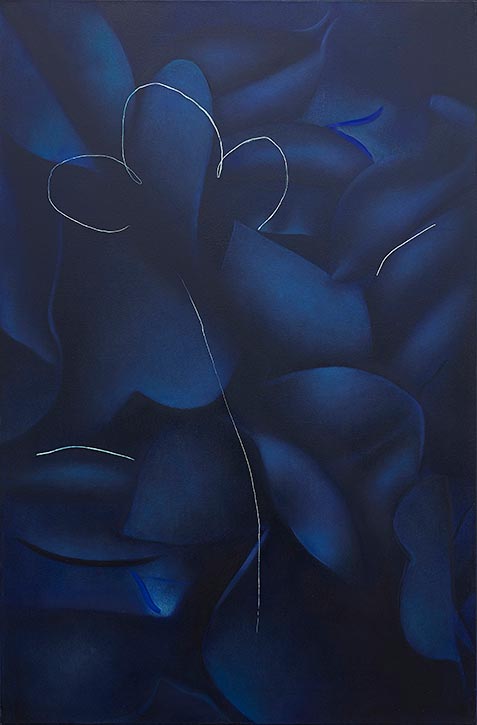 Louise Giovanelli’s paintings might be contemporary, but they are infused with layers of history. The London-born artist is inspired by early Renaissance Masters such as Duccio, Giotto and Piero della Francesca. She builds up semi-translucent layers of paint to explore notions of flatness, light, and rich, luminous colour. Though her works might appear abstracted, you will often find the spectral outline of architectural ornamentation or figures from an aged fresco. Scratches on her canvases serve to break the illusion of the painted surface and reveal the layers beneath. Giovanelli is currently showing at Manchester Art Gallery (until 19 April), presenting her work alongside a fourteenth century depiction of the crucifixion. You can also catch her solo exhibition Aerial Silk at GRIMM Gallery in New York (until 25 April), where she presents a new body of work that holds a more cinematic influence in the form of the 1960s thriller Peeping Tom. (Holly Black)

Jessica Rankin first gained acclaim for her “mental maps” which elevate the traditionally “feminine” pursuits of embroidery and needlework into codified work that combines poetry with signs and symbols that relate to ideas of identity, memory and intuition. In her latest exhibition at White Cube Bermondsey (29 April – 21 June) she presents new canvases that  abandon her monotone palette in favour of more expressive explosions of colour, complete with bold, gestural brushstrokes and intricately stitched marks and phrases that extend along the edges of the canvas. This clash of seemingly spontaneous painting and carefully calculated embroidery encourages us to look again, reconsider what it is we are seeing, and question the value placed on different forms of artistic labour. (Holly Black)

There is a quietly intense beauty to the photographs of Moyra Davey, whether she turns her lens upon a garden scene or teenage subject. Her photographs often focus on the essential fabric of our lives, depicting overlooked details of daily life or her own family and friends. For more than three decades, she has explored and unravelled the inner workings of what makes us human, turning often to the process of reading, writing and psychoanalysis. A new exhibition at Galerie Buchholz in Berlin pairs Davey’s photographs with those of the legendary American portraitist Peter Hujar. It is an ideal match, where moments of stillness and serenity are frozen in black and white. The show is curated by Davey herself, who sought visual themes such as animals, water, body parts and babies as points of immediate connection between the two of them. (Louise Benson)