Photographer David Goldblatt created a document of his native South Africa that spanned his lifetime. The photographs he has left behind provide a nuanced chronicle of the country from the dawn of apartheid, through its collapse, and up to today. “I do have a sense when I’m photographing… that I’m recognising what has been largely overlooked or not seen, and I have a sense both of its past and its weight,” he says in the book The Last Interview, published by Steidl in 2019.

In 1948, a 17-year-old Goldblatt would hitchhike from Randfontein, the West Rand gold mining city he grew up in, to nearby Johannesburg and Soweto. Here, he would engage in “poeging”, where he would walk around areas he, as a white civilian in South Africa, would never usually be. This practice of walking and observing was to become how Goldblatt made much of his work. Changes were taking place in South Africa, as apartheid was coming into law.

“Housing was basic and meant to enforce a sense of impermanence”

Places like Soweto were unseen, sometimes sprawling townships where Black workers servicing nearby white populated cities lived. For men, having a house was conditional on being in work and being able to prove it. For women, it was conditional on having a living, present husband residing with you. Housing was basic and meant to enforce a sense of impermanence.

Most people living in Soweto at that time worked in Johannesburg, which was 22 kilometres away. This photograph, Makana Tshabalala and Ntsiki Kabane, Rockville, Dube, Soweto, was taken in 1970. Goldblatt, then an established photographer, had suggested to Optima Magazine that they should publish a photo essay on Soweto by the photographer Peter Magubane, who lived in the township. The task fell to Goldblatt after Magubane was placed in solitary confinement by the South African secret police.

After some experiments and consideration, Goldblatt found a way of navigating Soweto as a white photographer. The resulting series is both surprising and enlightening. Goldblatt captures peoples’ lives, documenting the ignored and highlighting the human in people who were not being treated as such by the society they were born into.

This man and woman in their home struck me the moment I saw the photograph in Goldblatt’s current solo exhibition at Goodman Gallery in London. At first glance, they are stylish and self-possessed, their home is filled with beautiful objects. On spending some time in front of the photograph, more details begin to emerge, such as the outward-facing record, which is Miles Davis’ Sorcerer; this couple has an air of possibility about them, which defies my expectation of what I imagined possible under apartheid.

“At first glance, they are stylish and self-possessed, their home is filled with beautiful objects”

Sitting alongside the series with which it was taken—a complex mix of humour, poverty, resilience and insight into lives conducted under a gut-wrenching abuse of power—this particular photograph shows a different side of life in 1970s Soweto, one that many people outside South Africa will not have seen.

“Sometimes, particularly during the years of apartheid when a structure was due for destruction, I would have the sense of importance of putting it down somehow. So that it wouldn’t be forgotten, so that we might recognise it and give it respect,” says Goldblatt in The Last Interview.

Goldblatt took the photographs for this series on a camera which had its viewfinder at the top, allowing him to make eye contact with his subjects. “I do believe that in portraits when the eyes are looking at a camera, at a piece of glass, they tend to look dead,” Goldblatt said in a film released posthumously, for his 2018 retrospective at Centre Pompidou. “When we are looking at somebody with our eyes, they are looking at us with their eyes, there is an engagement.”

Until 25 August at Goodman Gallery, London 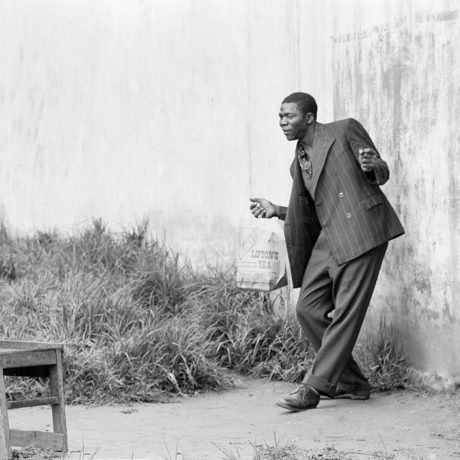