Khadija Saye’s mesmeric, spiritual tintypes are something of a marvel to behold. The sheer complexity of the archaic wet collodion photographic process gives her self-portraits a weight and richness that is almost impossible to digitally replicate and the eerie, liquid shadows that pool and form over her body gives each image a transient air. Every print in Dwelling: in This Space We Breathe recalls a different Gambian spiritual ritual, and represents Saye’s investigations into the “urge to find solace in a higher power”. As an outsider, they seem both intimate and strange, in the same way that discovering a forgotten, anonymous family photo album forges a fabricated closeness with the unknown subjects.

I first saw Saye’s photographs at the 57th Venice Biennale, long after the furore of the vernissage had passed. On visiting the Diaspora Pavilion, which positioned itself directly “in opposition to the very concept of a permanent national pavilion”, I was struck by the powerful beauty and melancholic nature of these images, which were tucked away in a corner on the second floor. Saye’s poise made her appear older than her years, as if she held secrets that I failed to comprehend.

I wonder whether the heaviness I felt on first seeing these images would have been as potent had I experienced them a week before, because I viewed them with the knowledge that the artist had just died, along with her mother, in the Grenfell Tower fire. The tragedy shook London to its core, as the horrifying ineptitude and apathy of local and national government was laid bare. With this in mind, the idea of a larger force passing through Saye’s photographs seemed palpable, as if spirits cloaked these imprints of traditional rituals.

Now, the same series is on display at Kettle’s Yard, as part of the exhibition Actions. The Image of the World Can Be Different. The title seems particularly poignant when considering Saye’s pictures. She brought her distinct, unique vision to the world and her voice was beginning to be celebrated by the art world before it was brutally extinguished. In the lighter, brighter Cambridge gallery her images still hold the same dark, spiritual force that lingered in that crumbling palazzo and it seems almost impossible that such a force has now been extinguished. In another world, who knows what Khadija Saye could have achieved.

Actions. The Image of the World Can Be Different

Until 2 April at Kettle’s Yard, Cambridge 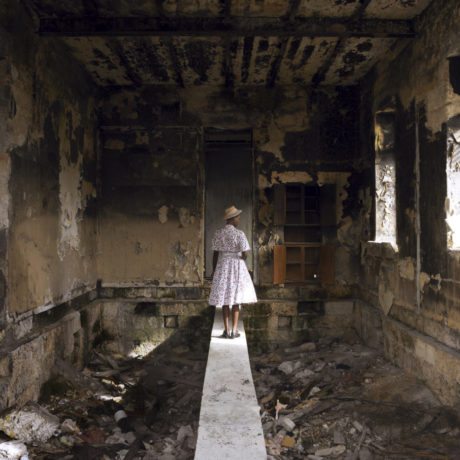