For Eva Rothschild, sculpture is a way of challenging the way we perceive materials and what they represent. Her use of myriad resources such as concrete, steel, resin, fabric and gaffer tape will always encourage you to look again, and her belief in creating a communal space that “isn’t just about the looking, but about being with the work” has led to a host of art objects that double as functional furniture. I met in her east London studio, ahead of her new exhibition at Modern Art.

What do you have planned for your new exhibition?

It’s been four years since I showed in London and I’m making all new pieces. I’m trying to bring together monumental and human scale works. In the past I’ve always kept things quite separate, so this is something different for me. Usually the large works I make remain porous, they aren’t just a big blob or lump. They are not something you just look at; you can actually engage with them. I’m continually interested in a large work being interactive in the most basic sense of the word––not pushing buttons or anything like that––but the ability to be within it and to become part of it, and therefore part of another viewer’s experience.

In a gallery show your work is framed by the space, so you want to increase that sense of a room within a room; of something being separated out from another body of work. It deals with ideas of display and relationships, and of the still life––the nature morte––those produced purely for visual effect. You spend a lot of time moving the works, and everything is about how they relate to each other.

Your distinct use of colour has always been an important part of your practice, how does it function within your sculptures?

I use a lot of black in my work because I like the idea of disparate objects being treated in the same way; being unified. If you have different materials treated in the same way there’s a confusion around the edges, a sense of them dissolving into each other, and yet, because of the blackness, there’s an absolute retention of the silhouette and the form of the whole. That hopefully leads to a more intense way of looking, which becomes quite questioning of the objects and our relationship to them.

“There’s this skew between the disposable and the permanent.”

The colour I use is often very defined because it’s on a geometric object with certain edges that dictates the form of the piece. Otherwise, it’s applied using spray paint, because it works in a totally different way, where the paint isn’t based on the trajectory of my hand but arrives on the surface by itself. There’s something to do with speed and distance, so the object defines the outcome. There’s a lack of control.

Your recent work has a focus on building environments that welcome visitors and encourage them to actually sit down. Isn’t that quite a tall order in an art gallery?

I’ve been making quite a lot of furniture in relation to exhibitions, chairs, tables, stools, benches… I made an amphitheatre piece for the New Art Gallery Walsall show, which I’d love to make bigger, but I keep running into health and safety issues. I’m interested in creating a social environment within and around the works so that it isn’t just about the looking, but about being with the art, in an environment that has a different focus. Romantically I believe that being with art objects in a gallery does have a different presence to others places I might go. It’s hard to get people to stay because everyone has a different destination mentality, and commercial galleries can be off-putting. There’s isn’t usually a sense that you can linger, but it’s worth a try.

You often play with materiality in your work, making soft objects appear hard and vice-versa.

I use a lot of cast materials, and they’re quite ambiguous. They might look like polystyrene or corrugated card, but they’re actually heavy and strong. I also want to question the built environment and what I would call the disposable environment: the amount of material that we engage with on the day-to-day. If we look at the things on this table, we have an art object, which will probably crumble to dust in a hundred years, whereas the packaging, which has no status, will last forever. There’s a weird morality around that. I’ve been making monumental objects from cast polystyrene, which becomes like a boulder or building block that, for me, would reference building in the ancient world. There’s this skew between the disposable and the permanent.

I’m also working on some fabric pieces for the show, made by printing with gaffer tape. Again, it’s something disposable made permanent. The tape is important as it’s like a facilitator for making, especially at the outset of things. Before something is made, something provisional is created. The tape allows that swift action and then it has crystallized in other ways, in other works, by being cast. At home, my children always need some gaffer tape whenever they’re doing anything… because there’s a sense that this will temporarily allow things to happen, it has a weird multi-functionality.

Gaffer tape is a very transient, utilitarian material. It seems to offer you head space to come up with a proper solution. That must be important to you, as a sculptor.

The ways of making are different to say, drawing, where it’s just you and the paper. You arrive at what you’re looking for very directly. But with sculptural processes so much is decision followed by procedure, especially when you’re bringing in a lot of different ways of making. I think, for me, I like that sense of a job-like quality. There’s thinking around the work, the decision to make the work and then a certain amount of things that are quite procedural, before you draw back and re-engage again.

You also have the immediate concern of whether the piece will “work”.

With sculpture, there’s always the basic problem of “Does it stand up?” There are so many variables, and it’s quite a broad thing to engage with unless you’re an artist who is focussed solely on one material, which is less and less how people work now. The imaginative process; the critical process; the procedural and then chance. Getting from A to B and assembling what you need for a sculpture is what is endlessly fascinating. That’s why I’m a sculptor. 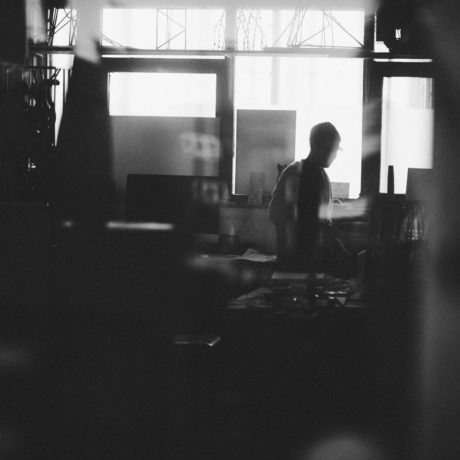