Halfway through Super Duper Close Up at The Yard theatre, Jessica Latowicki bursts into dance. The performer looks to camera and lets loose, rocking her head back and closing her eyes, throwing her arms up and running her hands through her hair. She looks like a superstar—onscreen at least.

The camera catches it all in close-up, zooming in on her face then her ass then her lips and, up onscreen, she looks luminescent: backlit, then bathed in cool blues and sharp pinks that pick up and accentuate her facial features. She pumps like Beyoncé, squats into a semi-twerk, then throws a sultry look down the lens as she rolls around—writhes—on a white rug. She’s the picture of confidence—carefree, self-aware and, yes, hot as hell. She’s a GIF-in-waiting, an MTV queen.

In reality, of course, she’s nothing of the sort. Latowicki’s dancing, so alluring on screen, is awkward in ways the camera can’t see. When she’s off-balance, it’s zoomed in on her feet. As it hugs her leopard-skin lycra shorts—silly onstage, but somehow sexy onscreen—her face shows the strain of an effortful pose. As for her soft-core roll on that shagpile rug, it’s plain ridiculous—less a pouting sex kitten, more newborn seal pup.

Super Duper Close Up spits fire at a world made up of images. It rattles with personal anxieties, all in the flawless face of an airbrushed, artificial culture. Latowick diagnoses a society bent out of shape by all-pervasive screens, as humanity gives up on matter, lets language slide, loses slip of reality, all for the sake of surface appearance. Everything looks better onscreen. Our virtual lives might be more real.

Alone on stage, Latowicki delivers a stream of consciousness, fretting about everything from the right bob-cut for her round face to the slight possibility she’s showing signs of Alzheimer’s. All around her she sees symmetrical celebs shedding angel tears, friends getting hitched and honeymooning with photogenic aplomb and peers/rivals spouting rave reviews to anyone who’ll listen. It’s a vicious cycle. Idealized images make us feel all-too real, so we face-peel and filter ourselves up to speed. Reality morphs out of recognition.

Fittingly, Emma Bailey’s stage is a photography set of sorts, framed by silver glitter curtains and studio light. A printed backdrop shows an ultra-idyllic rainforest scene, greenery pinging, waterfalls hanging like mist. It’s too perfect to be anything but fake—isn’t it?—and it feels all the flatter on a cheap white rug dotted, bizarrely, with a disco ball and flowers in perfectly unseasonal bloom: roses, dahlias and sunflowers. It’s kitsch as a Kardashian sculpted by Jeff Koons.

“It is, all of it, completely self-centred: up close and personal, warts and all. That’s the culture: individual, subjective, personal is political”

Dressed in a green Bacofoil dress, Latowicki both fits in and sticks out, green-screen style. The dress’s shape is Victorian, high collars and frills, but its surface makes it seem futuristic. She looks like a sci-fi Dorothy in Oz emerald green or an avatar of Alice in a digi-wonderland. It makes her seem both childish and not, prim and precocious and sexual all at once.

Latowicki becomes more animatronic when she talks, her American accent flat and autotuned. She picks up individual phrases with automated gestures, physical emojis for “scrolling” and “swiping”, “children” and “texts”. Equating words and images as if they were interchangeable, it flattens language down to an aircraft safety display—the sort you tune out of or into on autopilot. Later, her words start to spool out of shape.

Ostensibly, Super Duper Close Up is autobiographical. Latowicki recounts a meeting she may or may not have had with a programmer at a major producing theatre—the sort of meeting, she says, everyone calls “checking in” to cover the fact it’s really about work. She turns up early for appearances’ sake (“to claim the moral high ground”) and tries to play it cool, “scrolling” and “swiping” and “searching” while she waits.

Her stream of consciousness narration slices through layers of life, splicing the real and the virtual, distant memories and pressing anxieties, facts, thoughts and feelings. Everything unfolds in the present tense, all of it mingling into a blur: fragments of that friend’s wedding, facts about ancient Greek myths, images of her late Jewish grandfather, Google searches that segue from skincare regimes to self-diagnoses via online shopping sprees.

The text courses with close-ups of various sorts. It hones in on the present, on the here and now, on precise details and immediate impulses. But at every turn, its attention starts to wane as something else, something new, comes into play. It is, all of it, completely self-centred: up close and personal, warts and all. That’s the culture: individual, subjective, personal is political. At what point, however, do you lose sight of the whole?

“Like every controversial ‘think piece’ bidding for clicks, it swims in the same shit it wants to sniff out. It’s entertainment that comes at a cost”

Made in China’s work often combines cascading texts and eruptions of energy. Latowicki and writer-director Tim Cowbury toy with exhaustion—ours as much as their own—to show quite how sapping consumer culture can be. Their shows teem with images of gruelling extravagance: Latowicki on an exercise bike swigging champagne in Stationary Excess or, in We Hope You’re Happy (Why Would We Lie?), chomping through ice-pops until brain-freeze kicks in. Often appearances unravel as sweats build and foodstuffs fly, but here, sense unravels, as information overload takes hold.

That, really, is the thrust of Super Duper Close Up: it fries our brains to show how our brains are being fried. Beneath its surface, it turns its gaze on itself: a superficial attack on superficiality; a critique of consumerism made to be consumed. Like every controversial “think piece” bidding for clicks, it swims in the same shit it wants to sniff out. It’s entertainment that comes at a cost, and Latowicki makes her living, like an Instagram influencer, by presenting an (airbrushed) image of herself.

The slide to that realization is cleverly done, daring enough to seem over-simplistic before slowly revealing its self-awareness. From the opening credits, wheeling through trendy fonts, to Tom Parkinson’s underlying filmic score, Latowicki’s autobiography starts to feel artfully composed: layered in an intricate, writerly way. How, it asks, can art cut through artifice?

Latowicki tries a few different tacks in a bid to make some kind of (real) connection. Inching towards us, she tries to reach out, until she sits down amongst us and speaks to camera. The second she includes us, we become part of the image; she even plucking one audience member up onstage for a facial, an artistic gesture of generosity or care. But all you end up with is a show of those things—the appearance, not the reality. Art starts to seem an impossible act.

Is that enough? At what point does acknowledging art’s failure become an admission of defeat? Super Duper Close Up lands its point even as it undercuts its right to exist, but to what end? Isn’t it an artist’s duty to do more, to get around the limitations of their chosen form?

In its final moments, Super Duper Close Up tries. It cuts out the noise, the video, the set and zooms in on Latowicki in a tightening spotlight as she talks. It’s another kind of close-up, shutting everything else out, but by then, it’s too little, too late. Our brains have been fried by the background noise.

Until 24 November at The Yard, 2A, Queen’s Yard, London 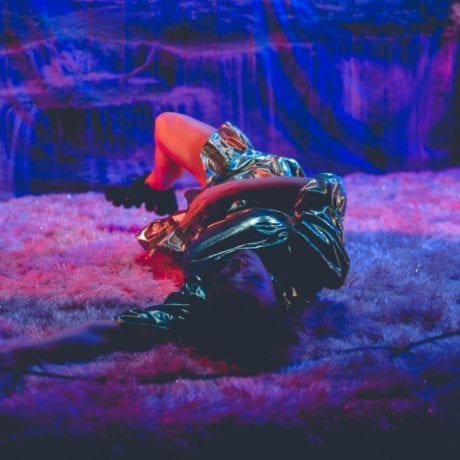