Maddie Yuille is inspired by the complex cultural history of women and water. The element is often acknowledged for its healing properties, but lakes, rivers and seas have also been sites of violence. Her recent body of work has been inspired by a mother and her two daughters, “the witches of Belvoir”, who were accused of witchcraft in the 17th century.

Yuille has just taken part in Elephant Lab, our month-long residency which provides artists with a range of art supplies from brands including Winsor & Newton, Liquitex and LeFranc Bourgeois. She chose to experiment with Winsor & Newton’s oil paints, a new venture for the artist, who explored how different layers and mediums can emulate the look of water.

Yuille’s women bathe in deep green waves. Her colour palette highlights the outdoor, natural status of this water, full of plant-life, part of an ecosystem, and far removed from the sterile liquid of taps and baths. Her women seem peaceful and at one with the water, as they rest against rock faces, sit on one another’s shoulders and dive into the river’s murky depths.

A series of paintings of women enjoying themselves in nature: swimming, resting, eating. They’re inspired by the story of the witches of Belvoir, a mother and two daughters accused of witchcraft in 1619. These paintings began as a reimagining of their story. I wanted to depict a reality in which the women are instead free to enjoy the landscape on which they worked.

I’ve used the residency to focus on material experimentation. As I only recently started using oil paint, I wanted to try out ways of working with oil and different mediums.

“I’ve used the residency to focus on material experimentation. I wanted to try out ways of working with oil and different mediums”

The work came about as the result of a few discoveries: reading The Book of Trespass by Nick Hayes, which is a history of land enclosures in the UK that explores how little access we have; the photography of Justine Kurland, who creates photos of teenage girls in hinterland/wilderness spaces enacting a sense of freedom; and a summer trip to France, where I spent time enjoying the pleasures of swimming in rivers and people watching.

Materially, I developed my ideas through sketches, painting on paper, and working on a mixture of small and large canvases.

Which materials have you particularly enjoyed working with?

I’ve loved working with oil paint and experimenting with different ways of using it and colour combinations. It’s been fun trying out the different mediums: Liquin original was great to improve the workability of the paint and for creating glazes. I was surprised by how much I enjoyed using the Liquin impasto medium to create thick bodied paint; it gave the painting a great sense of energy!

If you had no financial constraints, what other materials would you would love to try out?

I’d like to try working with oil bars to bring a new texture and type of mark making to the paintings. I’d also like to try watercolours for my initial layers, and would like to test out different primers, as the base surface is so important for how the rest of the painting develops.

For this body of work I’ve been thinking a lot about Jonathan Wateridge, and the way that his figures appear to be emerging from or disintegrating into their surroundings. I’m inspired by Kaye Donachie’s sensual figures and the way they meld with their landscapes, and Sanya Kantarovsky’s varied mark-making and colour palette, which communicate a sense of sickly discomfort. Finally, I’ve been thinking about Cezanne’s Forest Path (Fontainebleau) for the way in which he creates a sense of light cut into shafts and shards, constantly shifting and moving through the forest trees.

“Materially, I developed my ideas through sketches, painting on paper, and working on a mixture of small and large canvases”

If you could choose any city in the world to do a residency in, where would it be?

That’s a tough one! As much as I’d like to travel to a faraway destination, I’d love to spend time at Belvoir Castle in Leicestershire (the castle in which the witches of Belvoir worked), getting to know the land as it changes through the seasons, and imagining these women spending time there.

Getting to experiment with so many materials has definitely pushed my practice further, and I’ll take forward learnings from this as I continue to work with oils. I also found the critiques with other artists organised during the residency hugely helpful, and it has left me with lots to think about and try out. 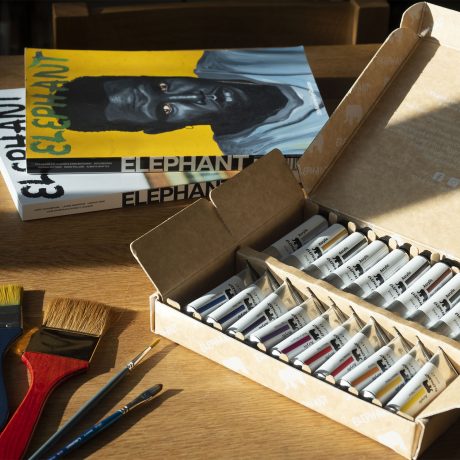