It looks to me like the ultimate act of love; a woman scrubs the coal dust from her partner’s bare back; his head is bent over a tin bath. He is still wearing his underwear and socks, and though we only see her in profile, it’s clear she is smiling, and doesn’t seem to mind the fact her smock dress is blackened, or that her behind is almost in the fireplace. As in any great picture, it’s all about the detail here: check out her elegant heeled shoes. As one commenter noted online, “It’s hard to imagine, now, the hardships of their daily life… but look at her pretty shoes!”

This photograph, taken by the documentary photographer Bill Brandt at the home of a miner in Chester-le-Street, Country Durham, in 1937, is one of a series of pictures shot at coal miners’ houses during a visit to Durham’s Coalfields. These depictions of the everyday lives of miners in the North of England are now displayed as part of the Bill Brandt/ Henry Moore exhibition at the Hepworth Wakefield, close to where the descendants of many mining families live.

The home is cramped and windowless, but this is not the focus of this particular image; centre-stage is the man and his wife, and the sense of fun found in their private ritual. It is an intimate and human picture that only hints at the hardships they endured at the pits and collieries.

“The 1930s was an especially fraught era in British history, with mass unemployment and social inequality during the Great Depression”

Other images by Brandt, however, have provoked controversy. For example, another photograph shows a miner at home at the dinner table, his face still dirtied with coal.  Some have said that it must have been staged (it is known that he used family and friends as models in his series The English At Home), thereby casting the miner in an unfavourable and even absurd light—a nod too to Brandt’s interest in Surrealism (he had trained in Paris with Man Ray).

Brandt was born in Germany but settled in England in 1930; he began his career photographing the upper classes in London and later turned his lens on the working classes in the North—his aim was to build an ‘ethnographic’ portrait of Britain. As a foreigner, Brandt was fascinated by the embedded class system, and although the works were not intended to be propagandist they inevitably served a political agenda once they were published by others.

The 1930s was an especially fraught era in British history, with mass unemployment and social inequality during the Great Depression. The divide between London and the industrial towns of the North are extreme in Brandt’s photographs, a visual record of the mines that have shaped contemporary class issues in this country to this day.

Brandt’s gaze on class may have been objectifying, but this particular photograph feels collaborative. The affection shared between his subjects is reflected in his own regard for the couple. Unlike so many of the stereotypical images taken at this time, of sooty landscapes and poverty—images that have contributed to the derogatory myth of “it’s grim up North”—this photograph reminds us that there are always other narratives, experiences of joy in co-existence with suffering, and that there are too, beautiful shoes.

At the Hepworth Wakefield, until 1 November 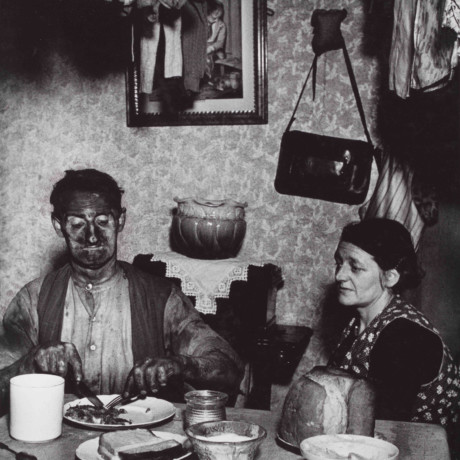