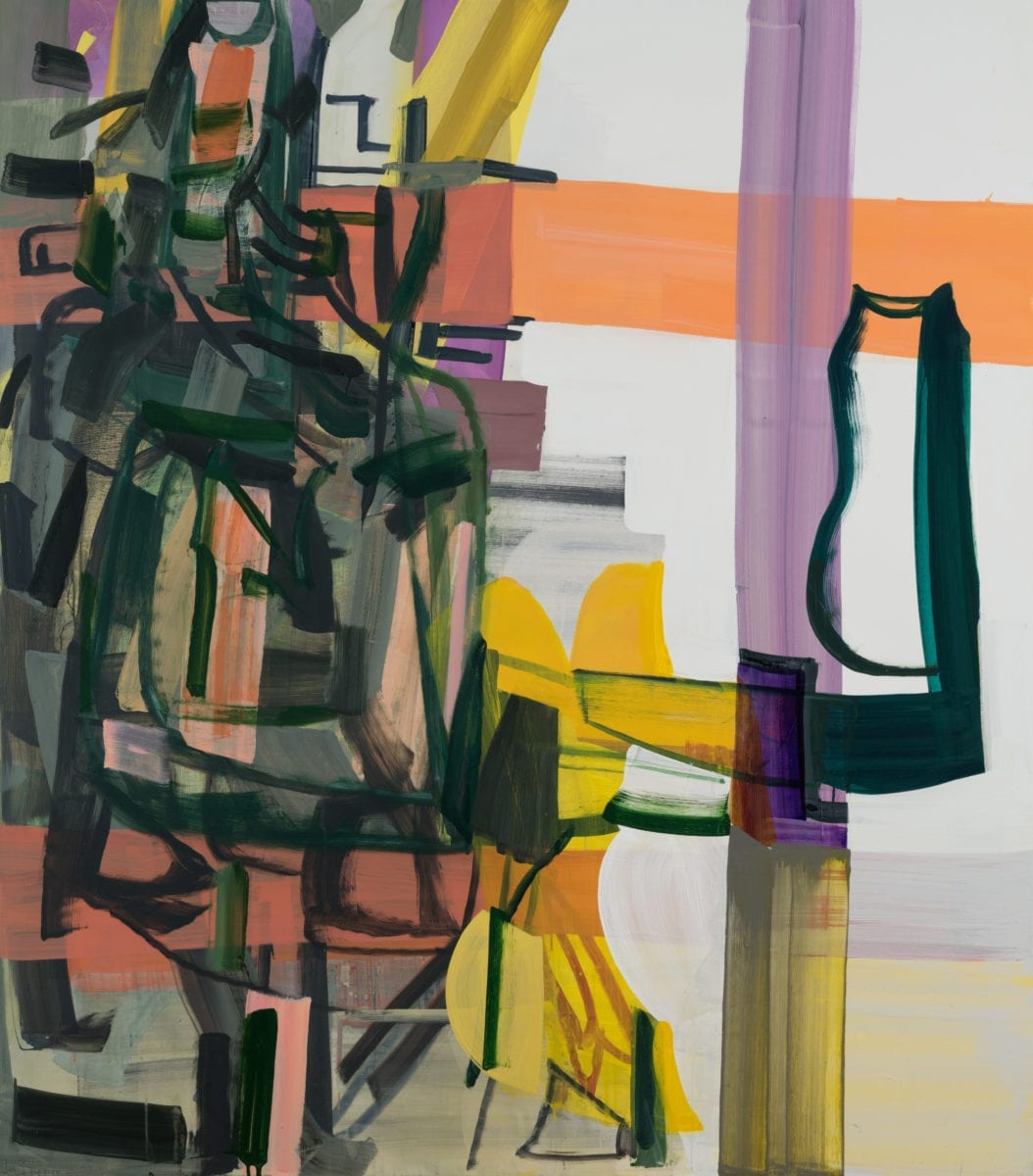 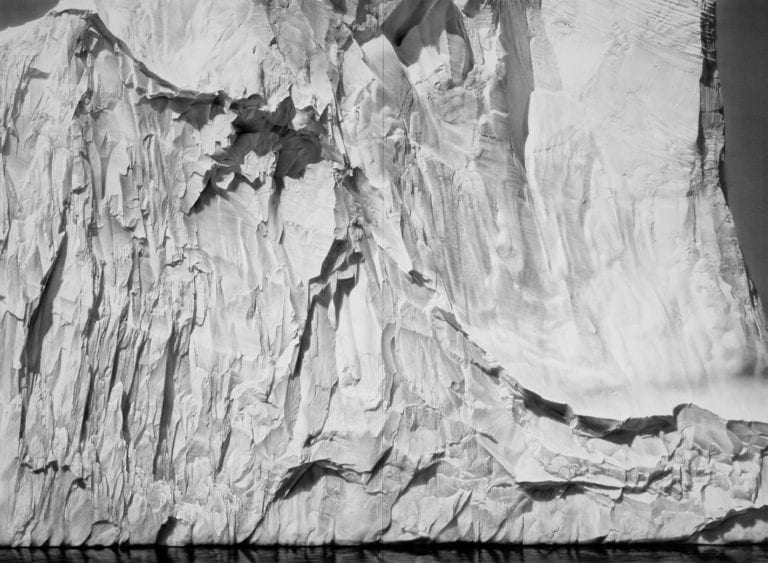 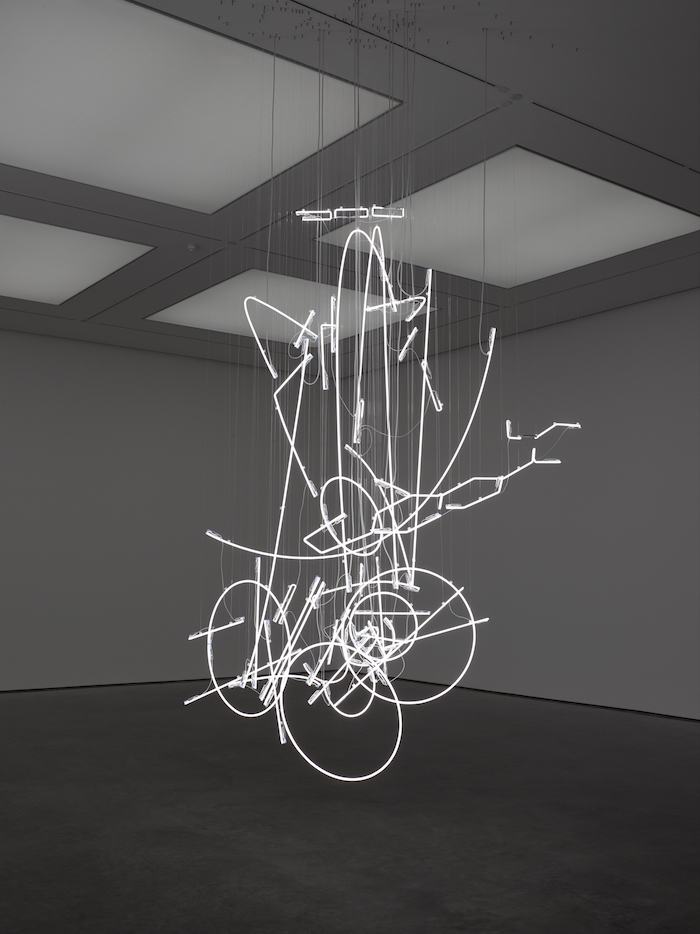 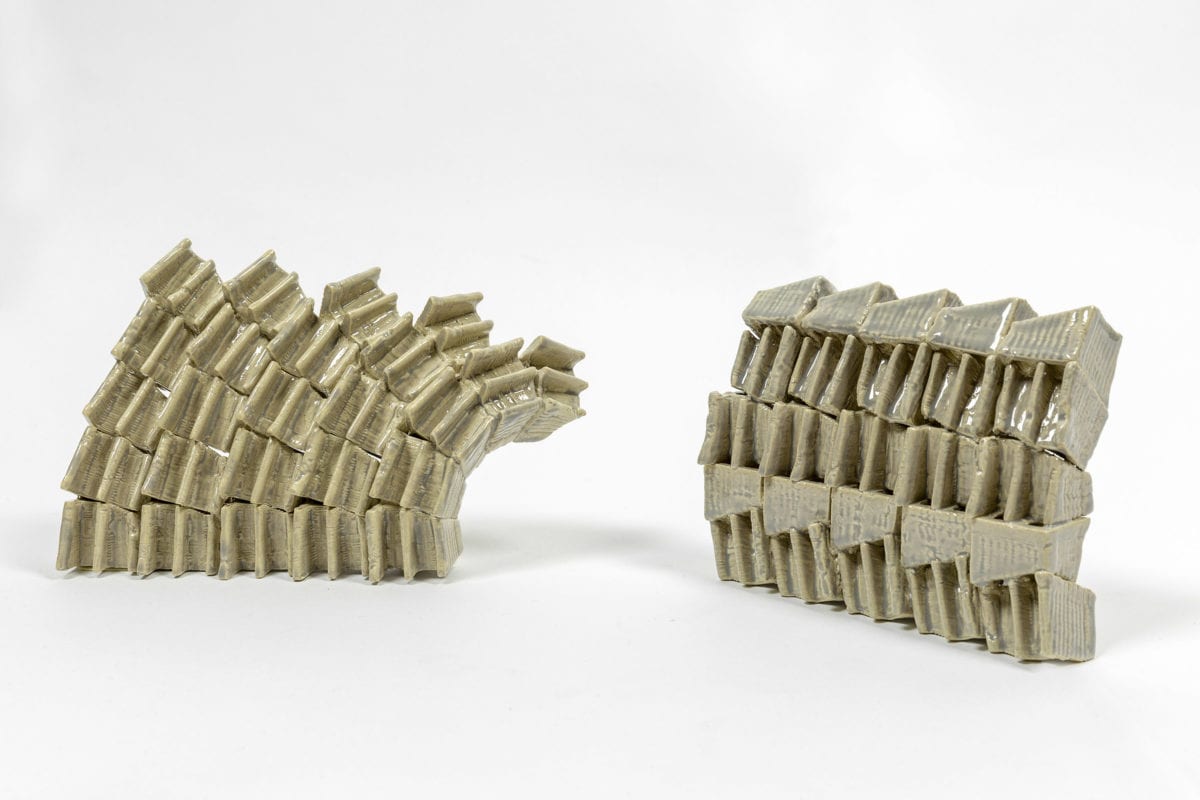 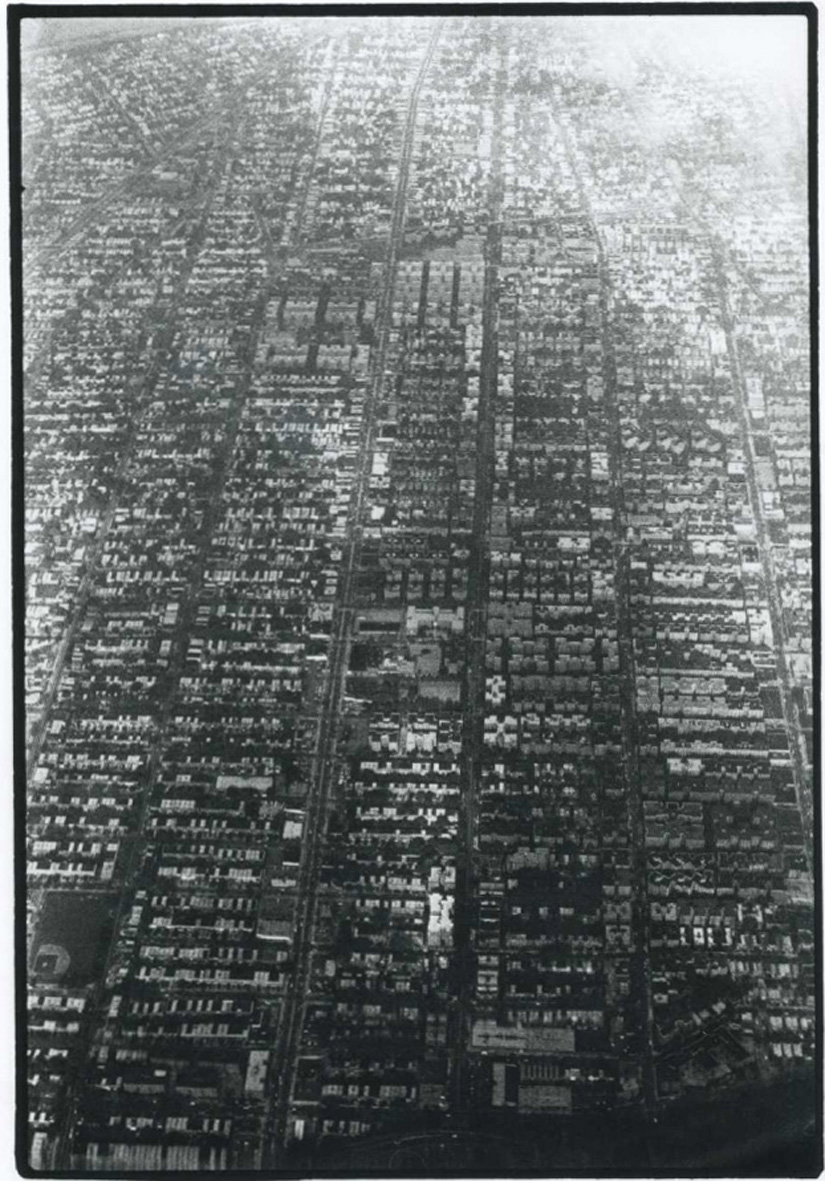 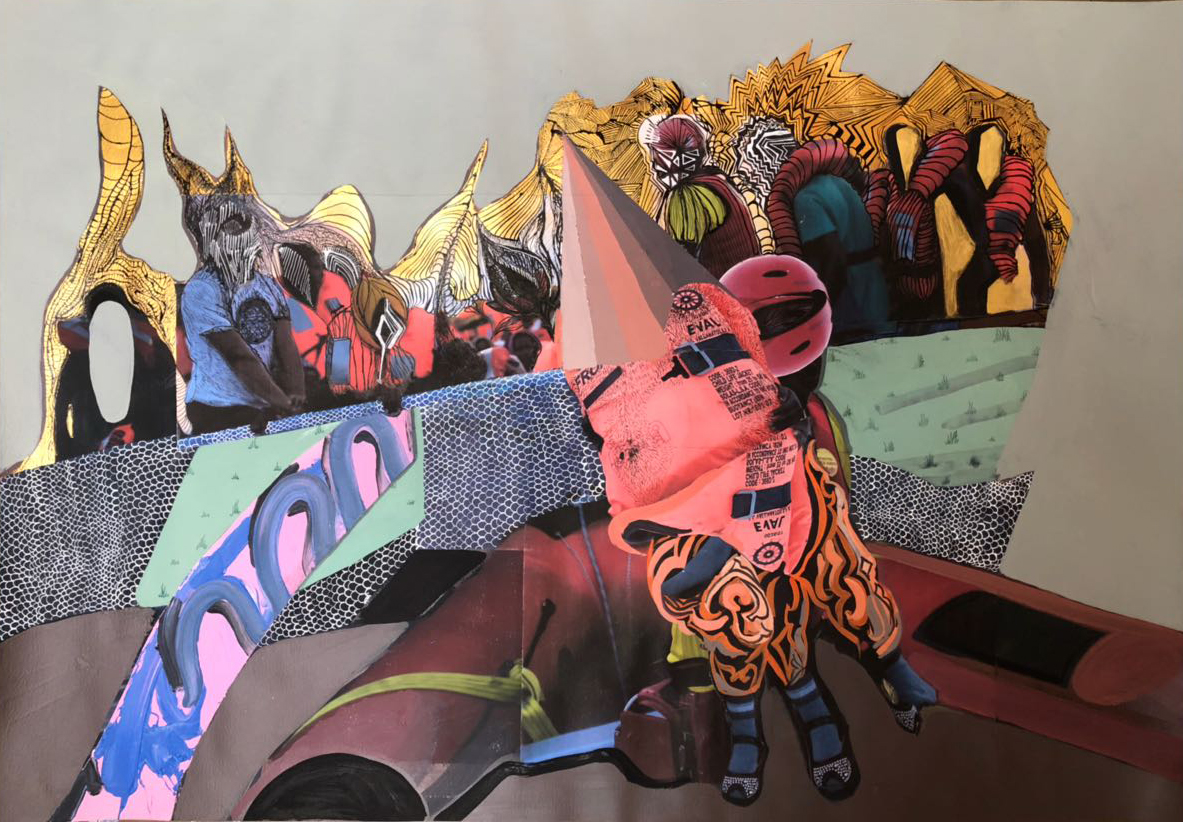 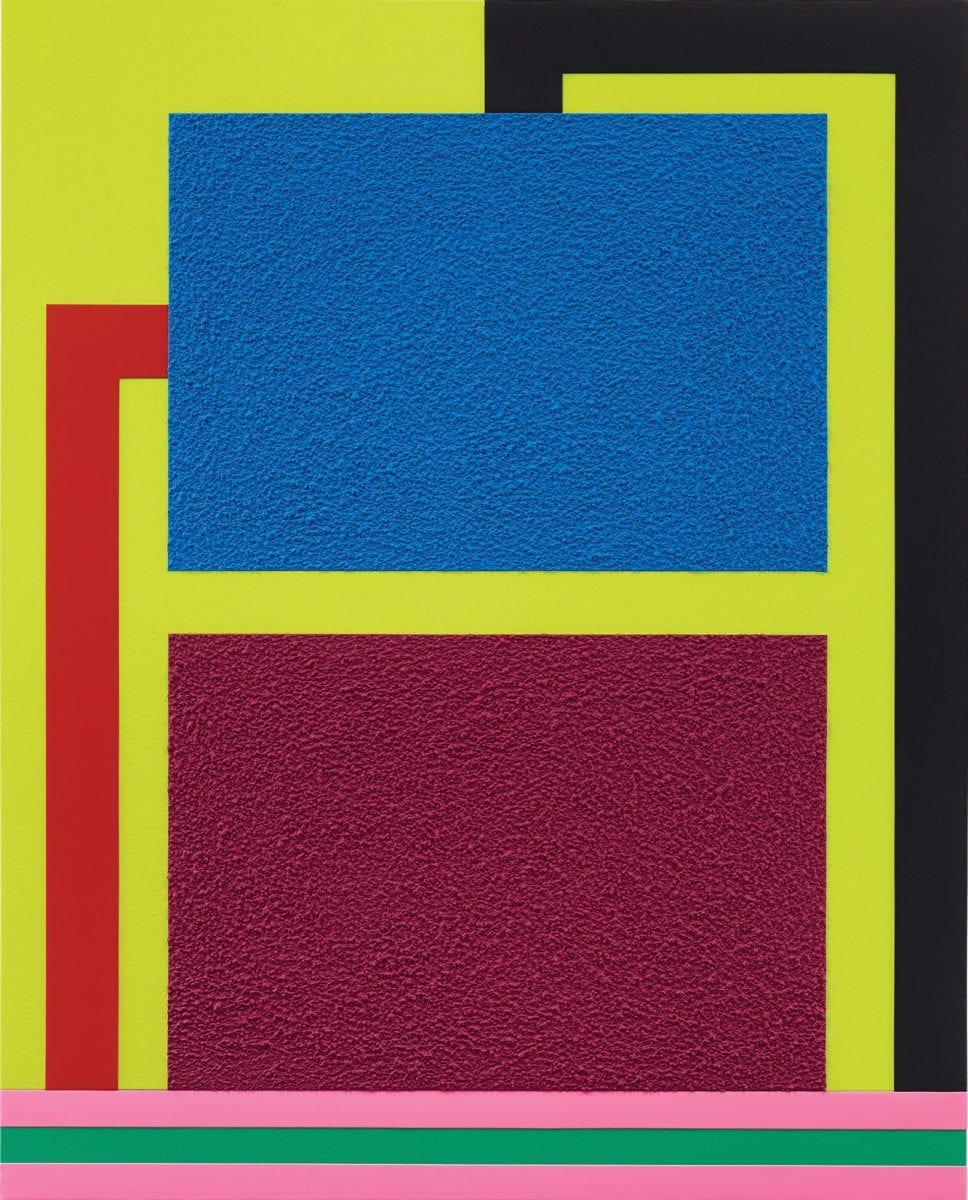 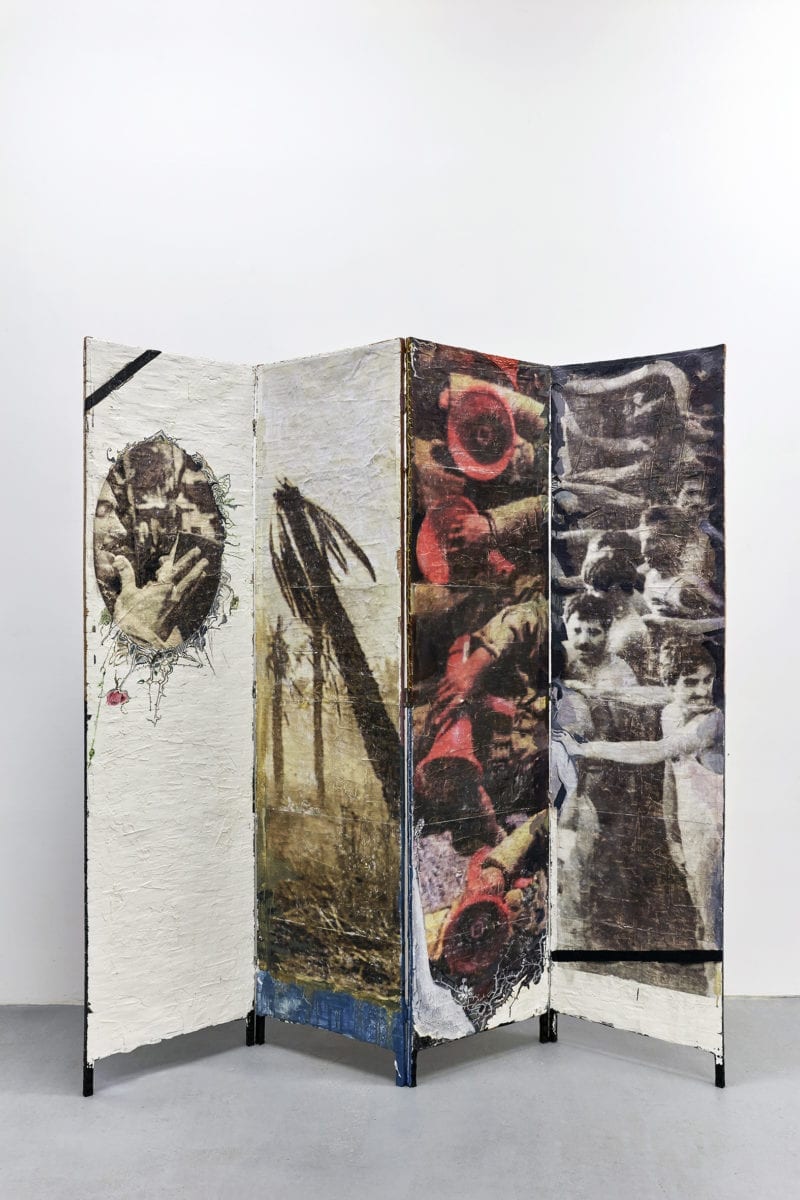 After last year’s mountain panorama, artgenève’s specially curated Living Room Exhibition, titled Turbulent Horizon, offers a new perspective of a skyline viewed from a helicopter, complete with a helicopter parked in the middle of the exhibition space, surrounded by video works which reflect the skyline. With this unconventional angle, curator Samuel Gross hopes to create “a strange and turbulent atmosphere”. Within the fair at the numerous gallery booths, this feeling of turbulence continues. While many of the pieces feature strong, decisively regulated lines, others contrast with their chaotic feel.

At the furthest end of the carefully regulated space, the clear bold lines of Olivier Mossett’s MUTT (2014) pay humorous tribute to Marcel Duchamp’s Fountain (1917). Of a similar aesthetic is Peter Halley’s Another (2014). Made up of clean blocks of colour, it is a hugely evocative piece, suggesting the mechanical in its simplicity. Amy Sillman’s The Dark Space of Speech (2018) is a perfect combination of chaos and mechanically managed lines, as bold strokes disappear into an abstract confusion. Timo Nasseri’s stainless steel sculpture, Parsec, combines the metallically mechanical with a chaotic form, while its name makes reference to the measurability of seemingly unfathomable space.

Zoe Leonard’s photograph Untitled (1989) shows a bird’s eye view of a cityscape. While Samuel Gross hopes to achieve a perception of turbulence from this angle, Leonard’s portrayal of the architecturally clean lines of the city create a sense of managed organization, obscuring the inevitable metropolitan chaos. The same effect is created in Nazgol Ansarinia’s fabrication, Attempts at Building a Wall (2018). Its repeated regulated pieces create a sense of standardized structure, but in reality we know only too well just how much social turbulence walls can cause.

While these two pieces portray the chaotic in the visually regulated, Cerith Wyn Evans’s Neon Forms (After Noh III) (2015) achieves the opposite effect. A tangle of Wyn Evans’s signature neon lighting, the piece is inspired by Japanese Noh theatre, representing the heavily regulated codified meanings which appear in this art form. Also playing with contrasts, Robert Longo’s charcoal drawing, Untitled (Sheer Virtue) (2018), uses shadow and light to create uncanny realism. Collages by brothers Ramin and Rokni Haerizadeh and fellow artist Hesam Rahmanian create a vision of carefully controlled chaos. While in many of the pieces, chaos reigns, artgenève’s diverse selection is carefully chosen and promises visual clarity in the turbulence.

Until 3 February at Palexpo, Geneva 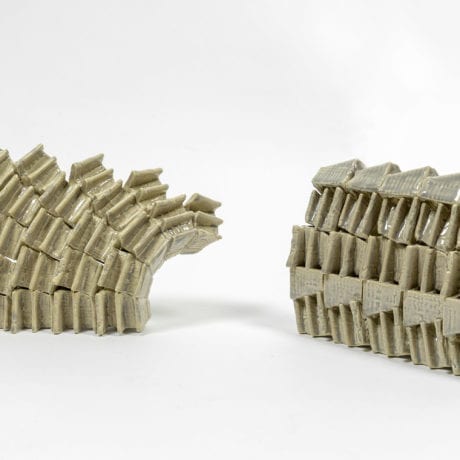 A look at what the female gaze really means in the time of Coronavirus, as seen through the eyes of eight artists.
Read More 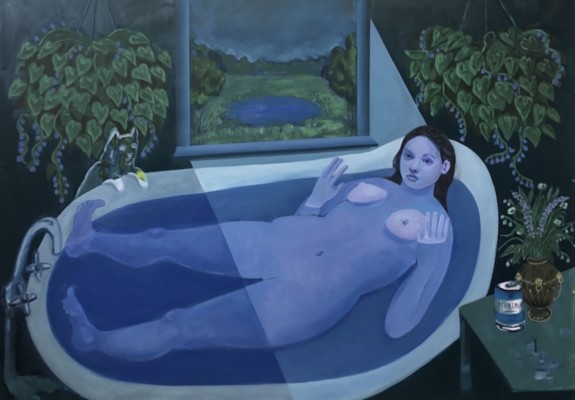 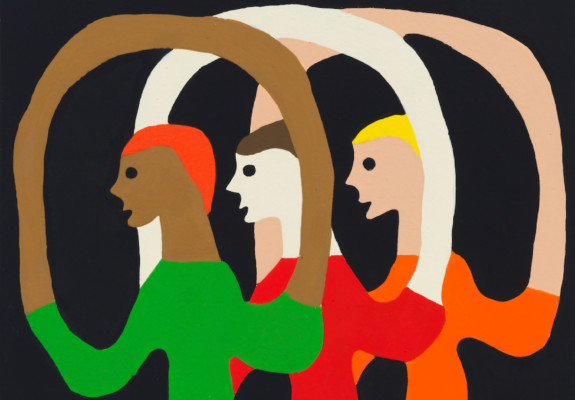 Is Lockdown Making Us All Too Self-Absorbed?

Spending vast amounts of time alone can alter our internal state. A new show suggests that when our worlds shrink, our sense of self looms larger.
Read More 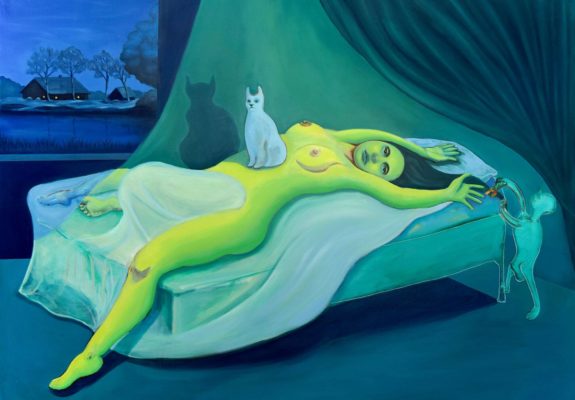 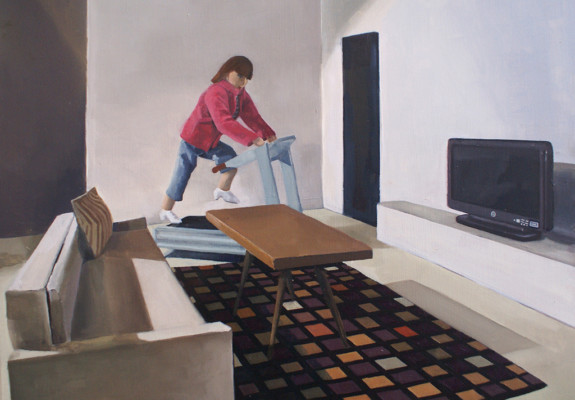 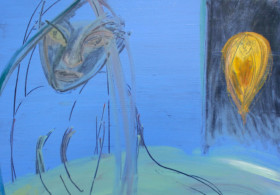 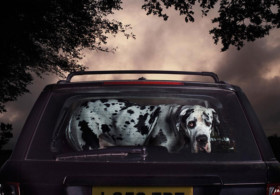 The Photographers Uncovering the Dreams and Drama of Adolescence 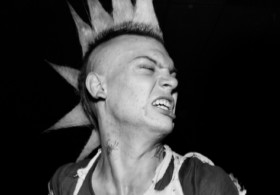 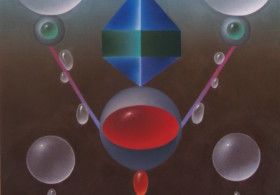 These Jewel-Like Compositions Celebrate the Organic “Aliveness” of Oil Paint