The cold light emitted by our everyday digital devices, from phones to laptops, bathes the scenes painted by Minyoung Choi in an eerie blue glow. Embedded in the largely unremarkable experience of modern reality, surrounded by the ordinary objects of domestic life, that blue light is given a fantastical edge by the appearance of sea creatures and imaginary crustaceans. Is this a cluttered living room, or is this what life might be like under the sea?

Choi appeals to our sense of the surreal, where anything is possible, and reality is never quite as it seems. It is as if the full story is never quite revealed, hovering just out of sight at the edges of the frame, ambiguously veiled in an unnatural phosphorescence. 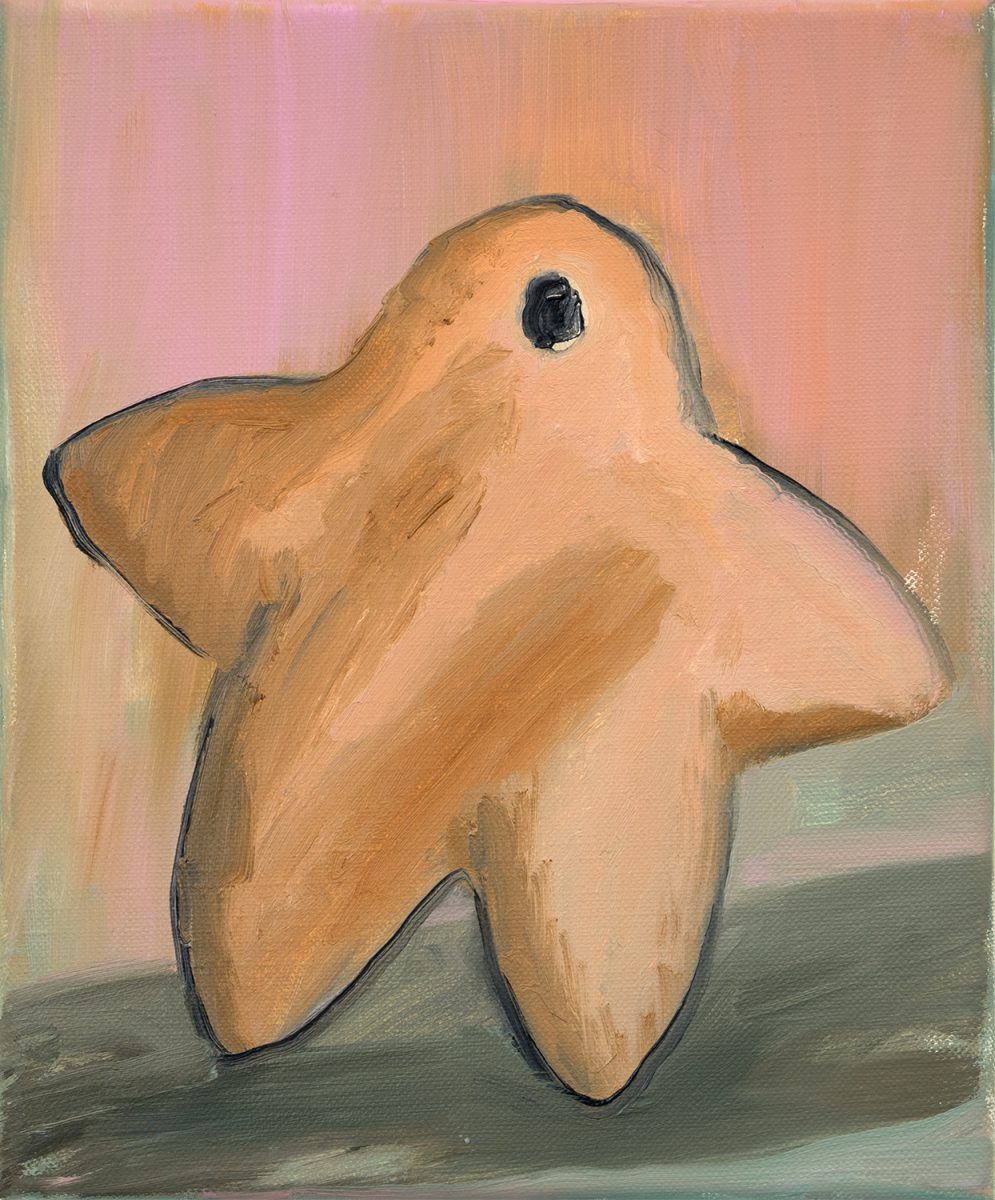 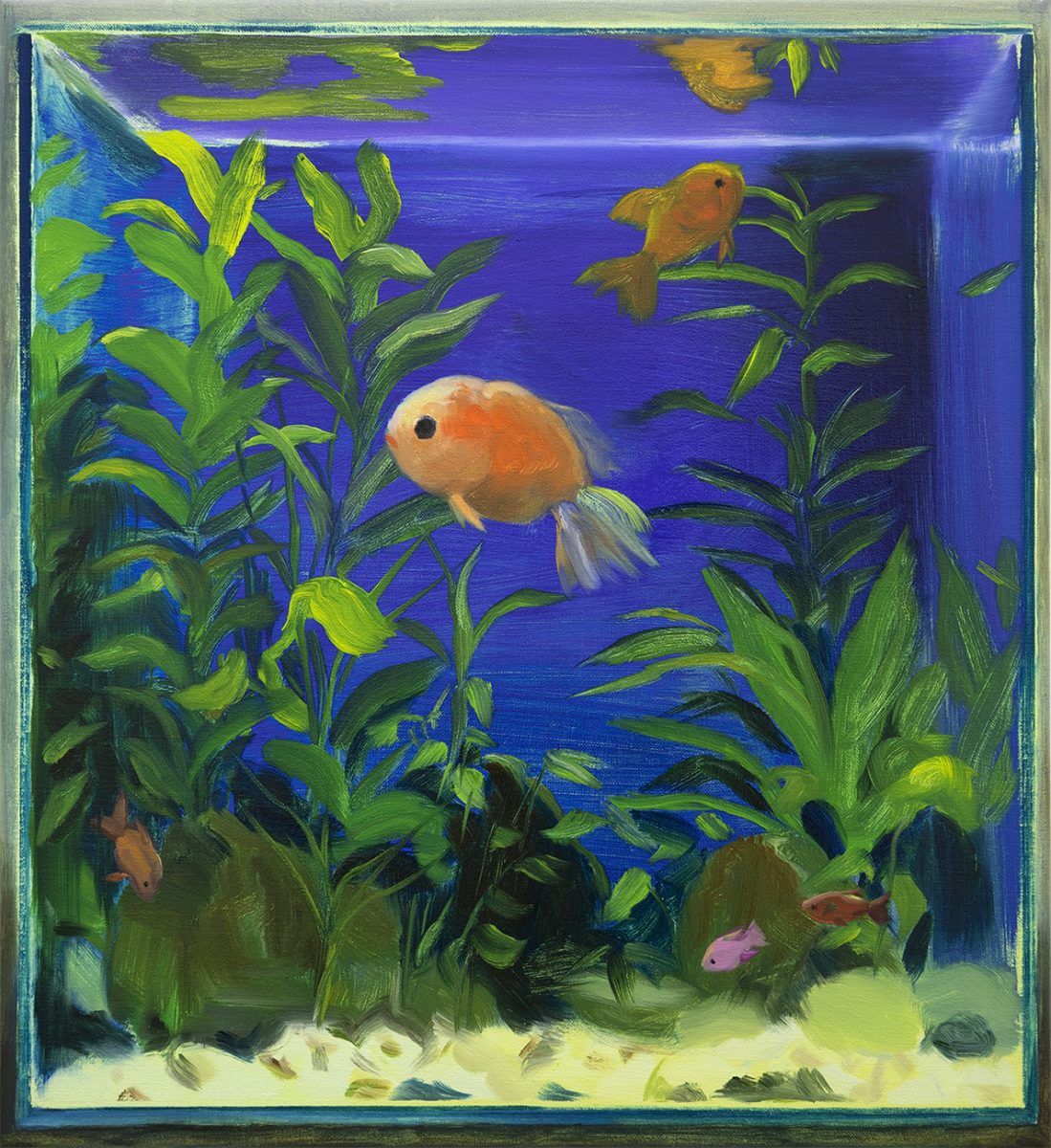 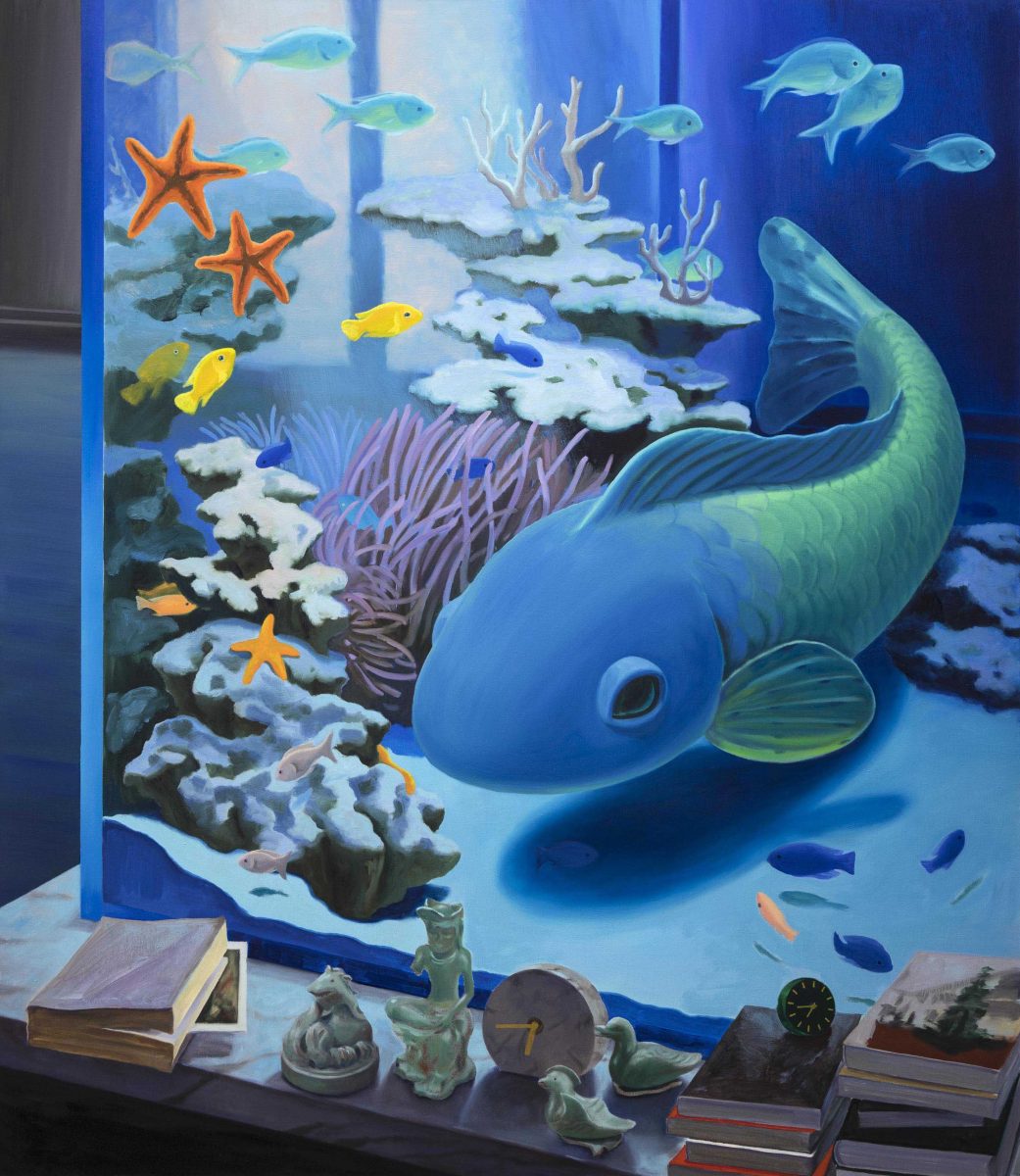 Choi works primarily from imagination, drawing frequently on her own dreams, as well as found images, cartoons and films. Most important of all are her own observations of daily life, layered with introspective memories, which are closely attuned to the minutiae of everything from a simple hand gesture to the tangle of a pair of headphones discarded on a desk.

Born in Seoul, she graduated from the Slade School of Fine Art in London in 2017, and remains based in the city. Her latest exhibition at Lychee One sees the motif of the fish tank extended across a series of paintings, with the everyday details of our lives recast from the view of an observer who peers in at us as we go about our daily rituals. An apt aquatic metaphor for life in the digital age.

What are the influences behind the specific, eerie light that is cast across your paintings, which often conjures up the cold glow of a laptop screen?

As a painter, I am very interested in light. I spend a lot of time in front of my laptop or with my phone, either for work or watching films, or for anything really. I have noticed the light the screen gives off and how it changes my everyday surroundings. It’s a subtle change but one that’s quite important as it pushes things into a bit of a surreal or magical direction, without being very exaggerated.

I like the fact that this is not so obvious, as it requires me to be involved in creating the atmosphere, which is quite essential for me. This sometimes-eerie cold light is similar to moonlight, or to lights in the night sky, but also to the light that a fish tank at night gives off. They all have the same quality and it is something that really fascinates me and makes me want to paint.

Sea creatures frequently appear in your work, contrasting with the typically domestic settings that you place them in. What do these sharks, goldfish and other aquatic life signify?

I believe it creates tension when the living and the inanimate coexist in the same image within a painting. It is also much more interesting for me to imagine these creatures in a human-made environment, which somehow reflects my own experience of living in big cities. Some of the fish and creatures are anthropomorphised in my work. Many of them resemble certain sides or traits of my personality, maybe because I end up empathising with what I paint so much. As I empathise with them and imagine what they are feeling while I paint, they almost become my own self-portraits.

The fish tank itself is a fascinating subject to me as well. While living in big cities, seeing fish as pets in a glass jar or in an aquarium has been more common for me than seeing them in the sea in their natural habitat. I think this idea of captivity also perfectly reflects how we interact with and perceive ‘nature’ in the contemporary world. It’s all a bit staged in the end.

In one particular work for example, I was initially intrigued by the idea of sinister sharks resting, although they don’t sleep as humans do. I wanted to create an impossible situation by placing them in a study room so that it looks somehow cozy but eerie too. Perhaps the room is filled with water.

The ‘slightly frightened creature’ is a starfish-shaped creature, which was an invented creature that I saw in a dream. This creature has one eye or mouth, I don’t know, on the forehead and has soft skin like a baby. Although it is easily scared for no reason, it recovers relatively quickly.

What city would you like to get lost in for 24 hours, and why?

If it’s only for 24 hours, I would love to go to Venice. I’ve been to Venice several times and I love the city very much. I like the fact that there are no cars! It is a perfect place to wander around aimlessly. It is actually better to get lost. I know I will get to alleys and plazas surrounded by beautiful buildings and shops. Most importantly, I miss a pizza place that I visited three years ago run by a very friendly chef. 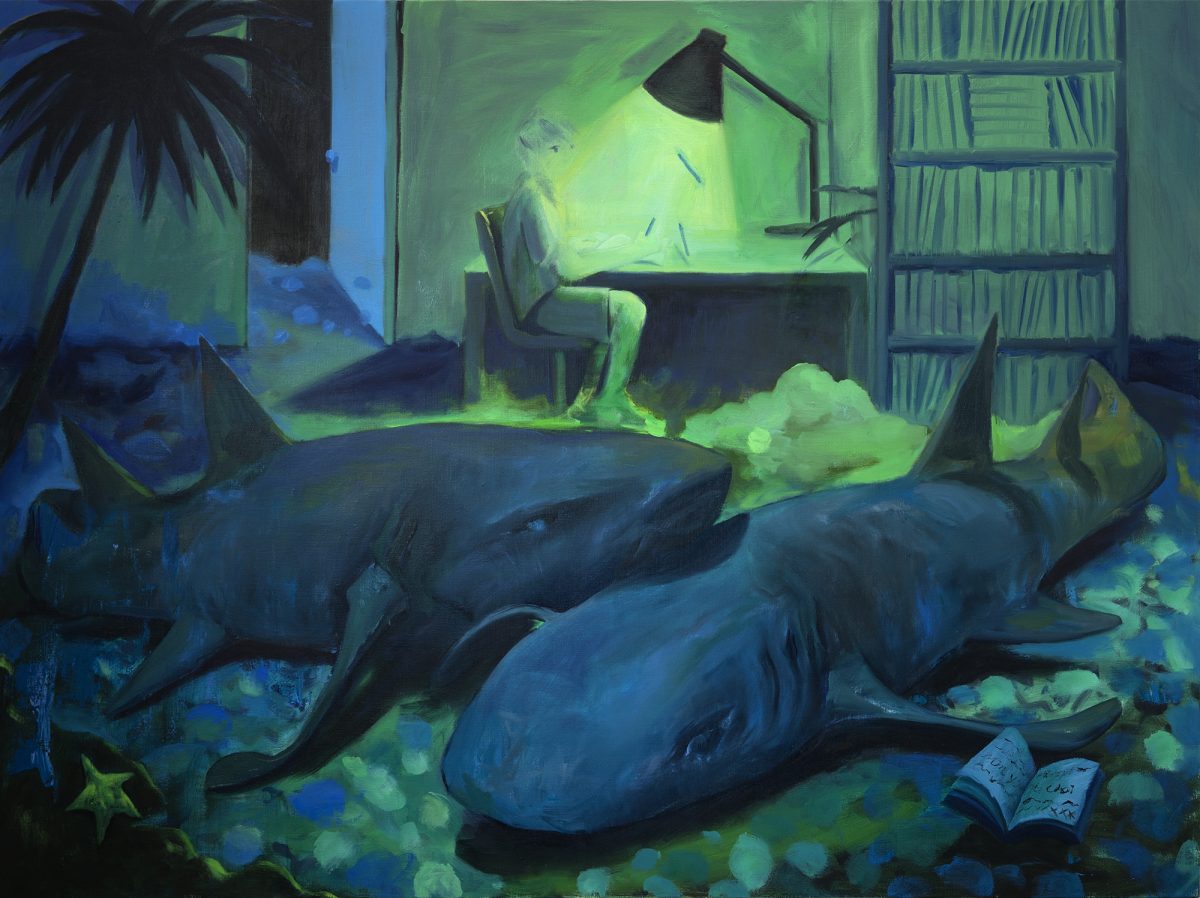 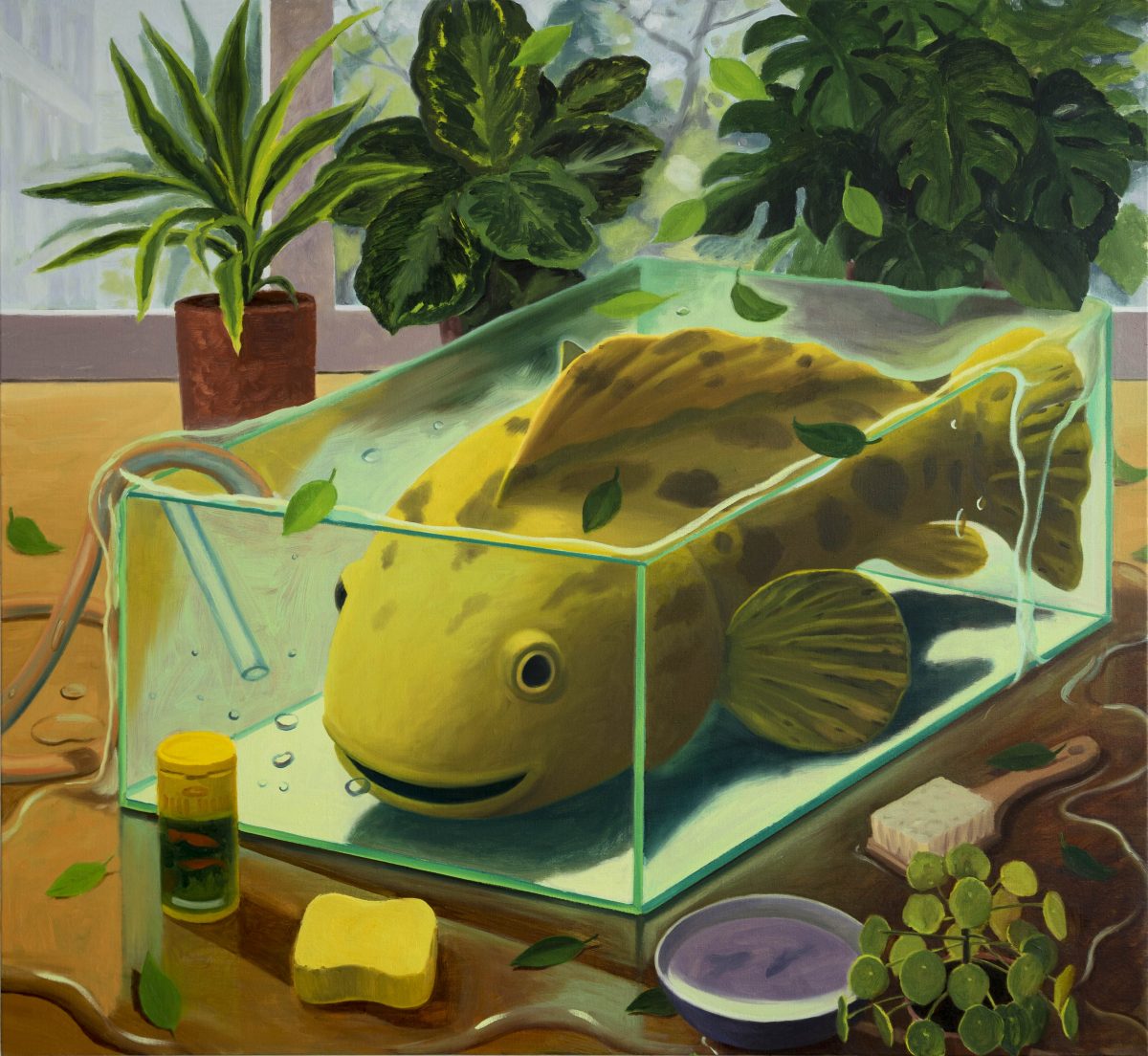 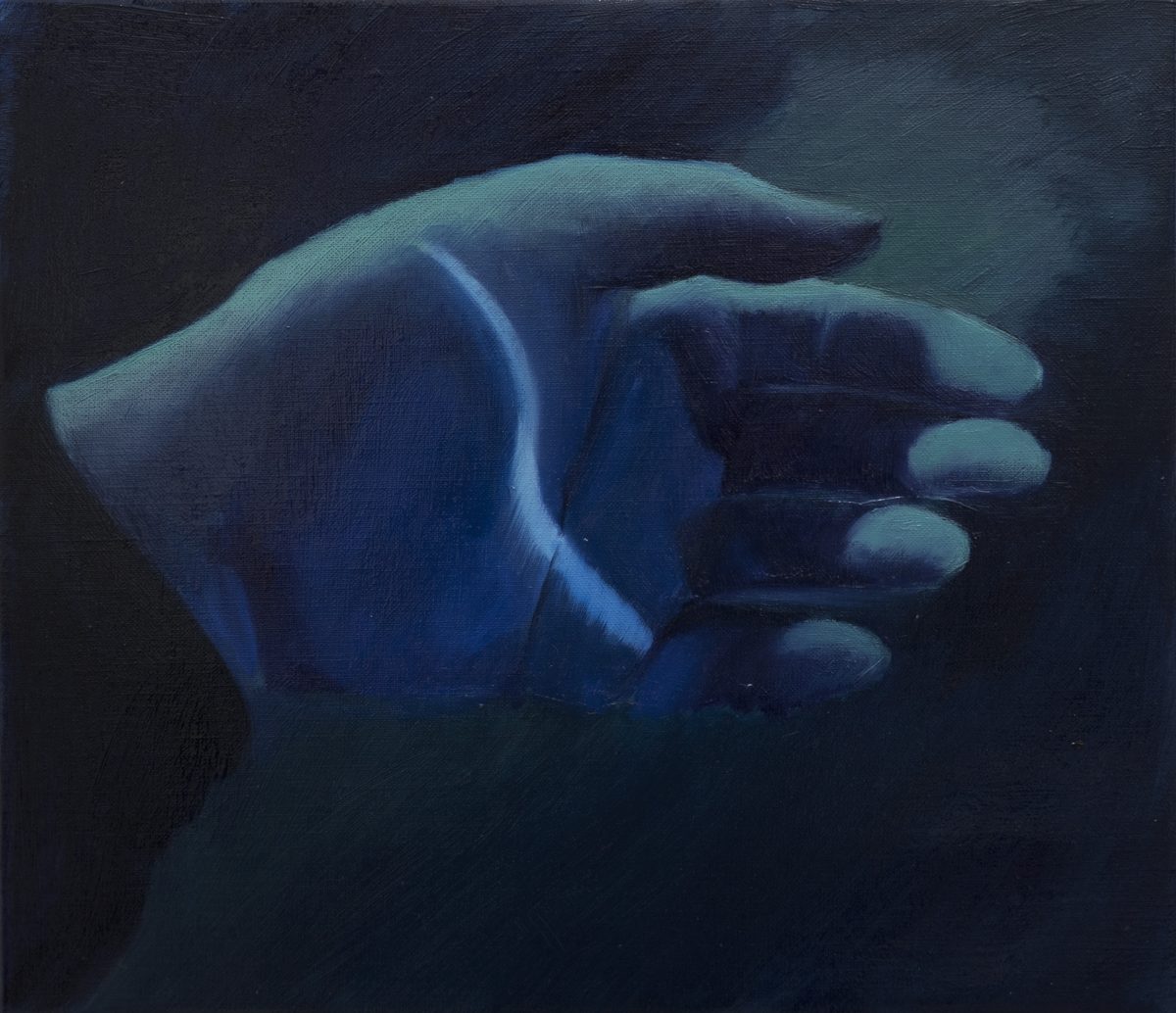 There is, at times, a sense of alienation in your paintings as if these scenes are trapped behind a pane of glass or frozen on a digital screen. How important are fantasy and the digital realm in your work?

Fantasy is at the centre of my work, although my work is very tied to reality and is essentially related to my own memories. I like to remember the surreal moments I have experienced which include my dreams, playing games, watching movies, and other digital or non-digital experiences. For me, life is magical and strange enough. I just need to tweak a little and arrange things in a slightly different way or view them from a different perspective.

Things I paint won’t make total sense in real life but they do in my work. The fact that it is a painting is essential. Each element is crucial to the whole image so composing the image for a painting is the same as staging a perfect coincidence and the viewers become the witnesses of these slightly unreal but yet believable worlds.

If you weren’t an artist, what job would you like to have and why?

I can’t really imagine myself doing something else other than being an artist! However, maybe I would fancy jobs that are related to marine biology or marine-life rescue. I would love to study the sea and its complex ecosystem. Also it would be rewarding if I were able to contribute to the restoration and preservation of endangered marine plants and animal species.

Minyoung Choi, Things That Happen When We Are Not Looking 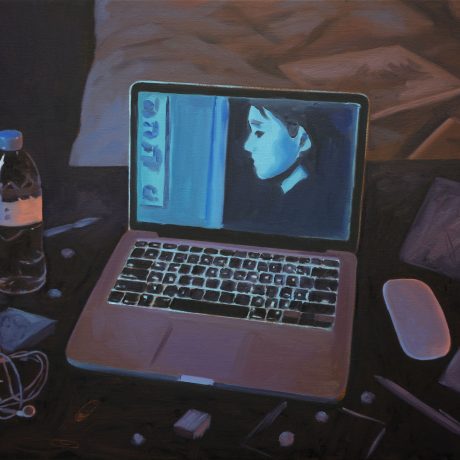