Using only a couple of lines and one single highly expressive dot, Russell Weekes created a colophon illustration for issue 24 of Elephant that managed simultaneously to be simple yet also incredibly clever. “The aim was to be as direct as possible,” the British designer and illustrator explains of his elephant drawing. “It’s a one-liner that is hopefully understood instantly. There are no added layers to the idea, just enjoying the play between visual connections.”

Weekes aims to surprise, yet also create familiarity. He says he is “trying to find a new angle from which to look at things within our everyday surroundings”. His intention is to produce work that “feels uncomplicated, without becoming too obvious” though he admits that some projects achieve this aim more successfully than others!

“Editing and simplification feel like the most important part of the making process,” he adds. “Reducing things down to as few elements as possible, focusing on the idea and working within limitations to best communicate it.”

“The aim was to be as direct as possible. It’s a one-liner that is hopefully understood instantly”

There’s a humorous streak in Weekes’s design for Elephant, and humour was often the focus of his early work. “It became a way to get a positive reaction from others,” he says. However, his approach has evolved alongside his work. “Humour is still there, I think,” he admits, “but there are fewer attempts to be ‘funny’ with more room given to a range of responses.”

Now Weekes places greater emphasis on making sure that the work he produces has personality: “Something that could be relatable to others, points of connection of potential shared understanding and experiences.”

Weekes’ mission to create pieces that sit naturally between the familiar and the surprising has moved his practice into working with found material and observations, “ideas that are discovered or spotted, rather than imagined”.

He explains that he is “always testing and questioning” the types of projects he creates, the processes used and the placement of the work. “Though projects may not always look alike,” he says, “I think the viewpoint and approach to ideas feels closely connected.”

“Sometimes the focus is about refining a way of working,” he elaborates, “and sometimes the impulse is to try something totally new. I’d like to say I was curious, though in some ways I feel pretty fixed.”

Weekes’s interest in observations and found material means he is increasingly concentrating on photography – perhaps unsurprisingly, given his mission not to overcomplicate his work.

This shift has given Weekes the chance to create longer-form projects involving found collections, including Nature Spotting (featuring sticks and leaves that look like animals) and Cumulus (a set of more than 350 found postcards following a journey through the United States by a group of clouds).

Weekes’s open-minded approach has also led him into publishing and web coding. “An idea might not originally work in one format, but it does in another,” he explains. “Having options is useful.”

And as if to underline that point, Weekes’s elephant hand (hand elephant?) has been given its own “second life”. It is now available as an exclusive T-shirt, screen-printed on 100% cotton. 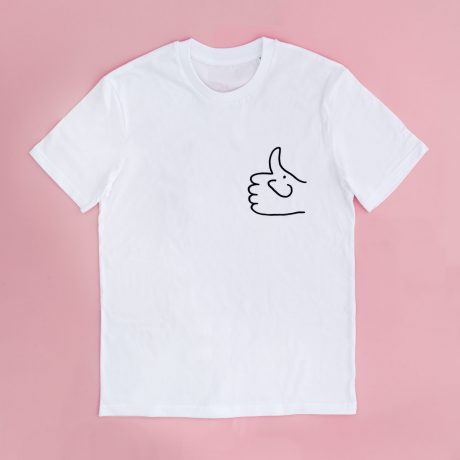