In March of 1960, Frank Sinatra sang a duet with Elvis Presley at the Fontainebleau Hotel in Miami, Florida. It was an iconic meeting of singers from two generations at a turning point in American pop cultural history, and heralded the new decade to come.

Miami Beach, with its rapidly transforming waterfront and evocation of glamour, offered the ideal backdrop for the occasion. Itself on the cusp of a dramatic transformation, in the years to follow the city would see resort hotels rise up on its sunbaked streets, soon to attract millions of Americans in search of a good time.

For new York-based photographer David Godlis (best known simply as Godlis), Miami was a place of escapism and promise. In 1974 he spent ten days absorbed in documenting its streets and stretches of sandy beach, distracted by work while holidaying to visit his recently retired grandparents. During this time he shot a total of 60 rolls of film.

The resulting images capture the gaudy trappings of postcard-perfect tourism. Godlis’ skill lies in his ability to slip underneath that shiny, bouffant façade. In his images the sand is in your eyes and the coke has gone flat, but you can’t help but want more. He captures the rumples of a jersey dress; the tiny sunglasses designed for a maximised tan; the beach chair placed proudly amidst the waves.

“In his images the sand is in your eyes and the coke has gone flat, yet you can’t help but want more”

Yet he conveys none of the snide judgment of an outsider for whom Miami holds no charm (a perspective that is so often propelled by class identity). Instead, Godlis imbues these pictures with the gentle humour that can only come from self-knowledge. It could even be called tenderness. He is on holiday in Miami too, after all.

There is a freedom that comes with vacationing in an unknown city. That spirit of play and wonder fills Godlis’ portrayal of the streets. Shot in high-contrast black-and-white, otherwise unnoticed details emerge in crowded scenes of discarded shoes on the sand, or in up-close snaps of the city’s distinctive art deco architecture.

Garish adverts for fast food, live shows and souvenirs add welcome texture to these images, a clashing symphony of postponed desire and cries for attention. This is an America undergoing rapid change, where swaying palm trees mingle with their own cartoonish representation on signage, and where cherry is nothing more than a synthetic flavour of soda. 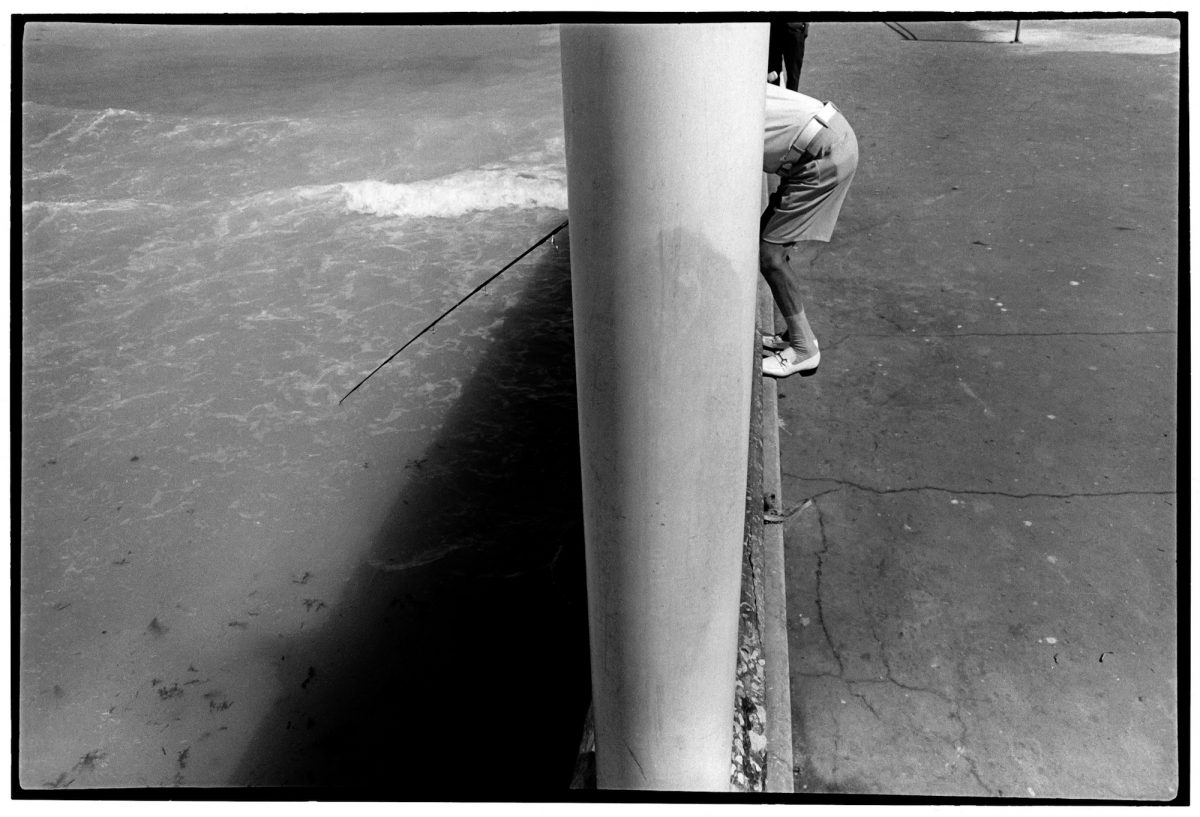 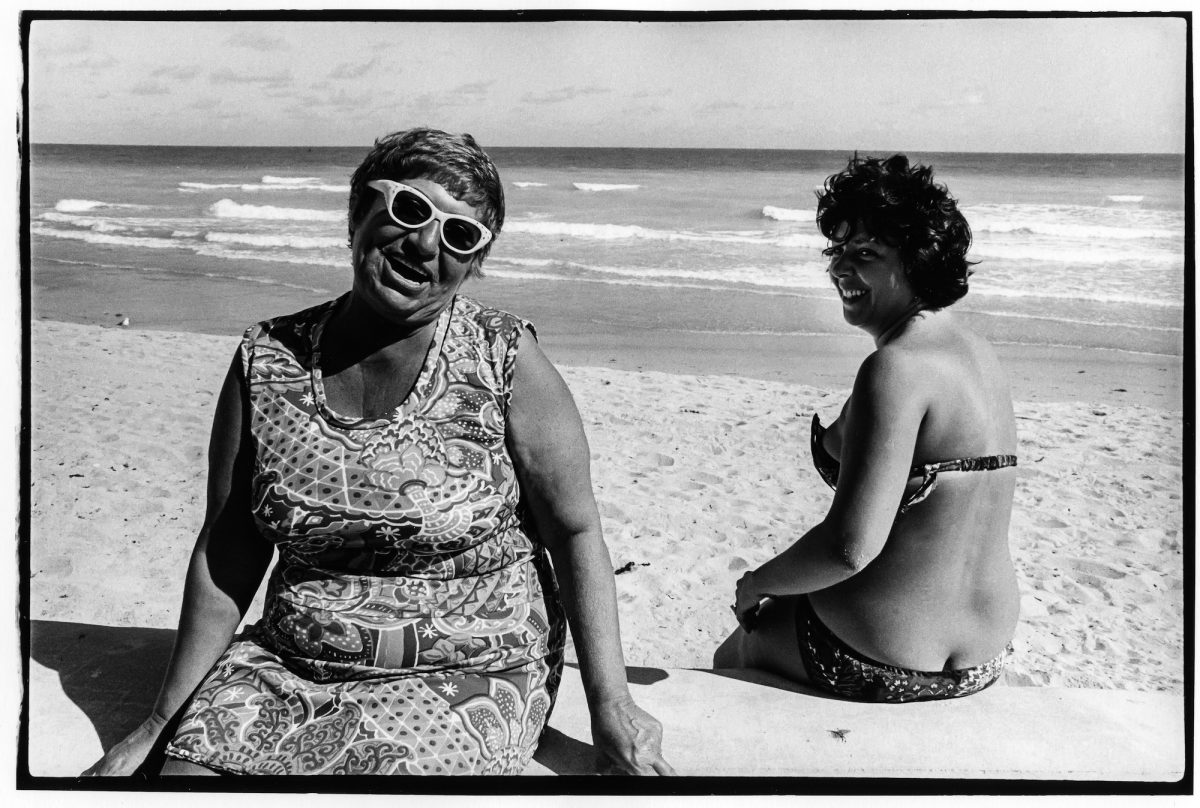 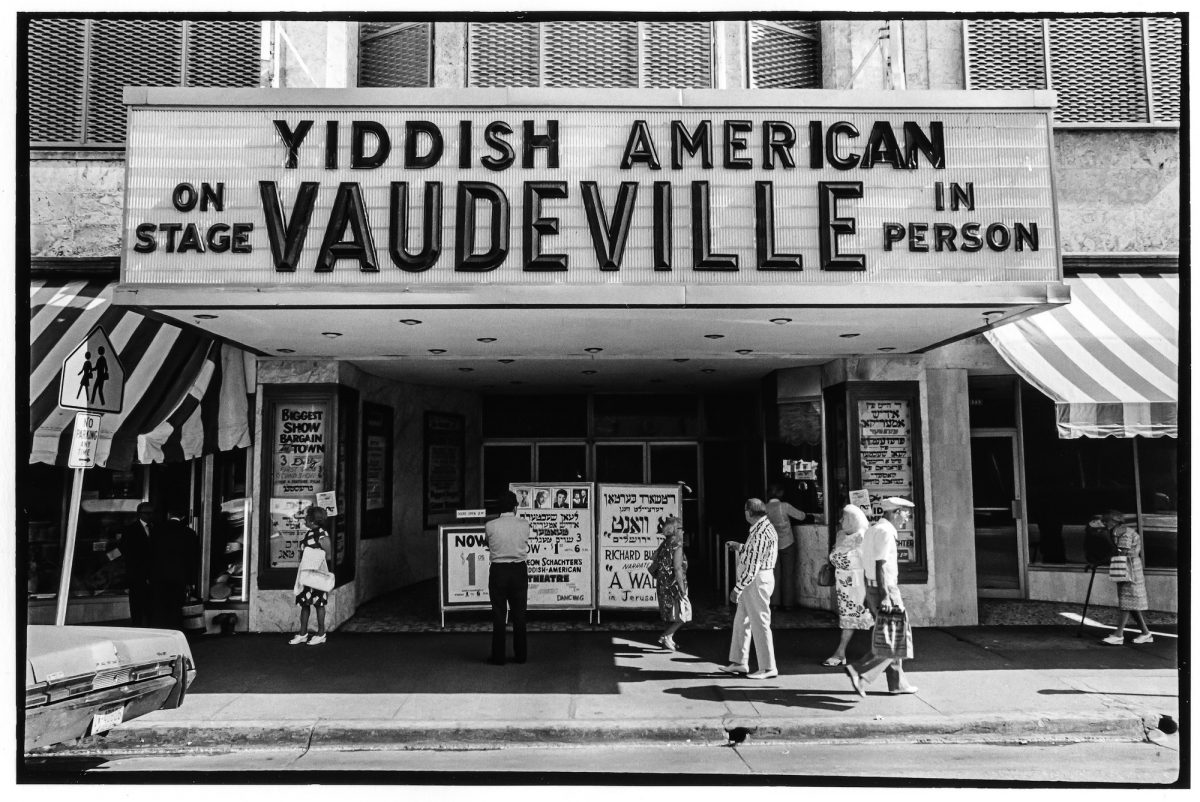 The many people who appear in Godlis’ portraits of the city tend to be either very old or very young, with little in between. It is unsurprising, given the allure of the place for those entering retirement. Here they can see out their days in comfort and style alongside their contemporaries, soaking up all the entertainment that Miami has to offer. The backdrop of these images is formed of bingo halls and cinemas, orthopaedic shoe stores and pharmacies.

“Garish adverts for fast food, live shows and souvenirs add texture to these images, a clashing symphony of postponed desire”

While Miami might be a place to visit as you enter a new, slower phase of life, it is notable just how vivacious the mood is in Godlis’ framing of the city and its residents. The people make the pictures as they cavort, laugh and pose with a smile for the camera.

Like the anonymity of a hotel bedroom, the city is shown as a place where the concerns of ordinary life can be shaken off. As the nation entered a new era during the 1960s, so too did Miami’s ageing retirees. It is often said that with age comes a loosening of the strictures of self-consciousness. In Miami these cares could be swept away entirely, taken out slowly but surely with the tide. 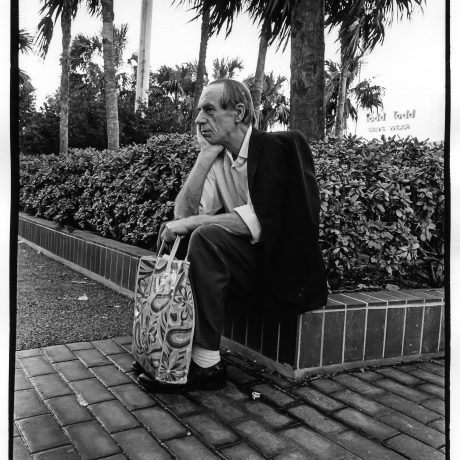