Marv Radio was eighteen years old when he first had an out-of-body experience while beatboxing. “I was watching myself from above, just feeling this different energy,” he recalls. “I came back into the room when I heard the applause, and I just thought: ‘What was that?’ At that point, I realized that I wanted to try different forms of meditation and yogic breath control. When you sing or beatbox, you carry a wave on the breath—and through breath, we open up to different ways of feeling and expressing ourselves.”

More than a decade on from that higher state of consciousness, this London singer/rapper/beatboxer and self-styled “sonic scientist” has fine-tuned his skills, faced vicious demons, and further expanded his horizons—and he channels all of these elements into his live art, including the recent acclaimed show (and upcoming album and graphic novel with illustrator Shangomola Edunjobi) Mantra, and his latest collaborative project, Hip Hop Palace, where he teams up with dance artist Muti Musafiri.

A conversation with Marv can prove as intensely candid and exhilarating as his performance work; Marv is a charismatic soul and a funky entertainer in a restless six-foot frame—his expressions powerfully confront his rebellious youth, and his struggles with depression, including a suicide attempt in his teens. In Mantra, he also relates his forays into Shamanic teaching, and his time spent travelling around South America (particularly Ecuador), living with and learning from indigenous cultures who use the therapeutic force of the human voice and sound, through spiritual practice and psychotropic ritual.

“In some ways, Mantra has developed itself over the years,” he says. “Because it was so personal, I had a lot of people giving me feedback.” Marv describes his natural gravitation towards music (“I was born into it—my mum even used to play Stevie Wonder through headphones to her stomach when she was pregnant with me!”), but also his adolescent tussles with authority and a sense of belonging. “I used to look at myself and think: ‘Why am I feeling so much pain and tension?’ People would tell me: ‘Pick your battles’, but I already was—and I was trying to put the world to rights!”

His travels appear to have grounded him, without constraining any of his ardour. He became intently focused on his surroundings, and the way that sounds could affect physicality. When he returned to London, he changed his performance name from Marv Ill (“because I couldn’t have the name ‘Ill’ as a healer”); these positive new vibes weren’t always embraced in his old music circles, however. “People didn’t want to be seen working with this transcendental hippy nonsense,” he laughs, ruefully. Undeterred, he continued to develop his performance work and practice, insisting that many of its themes have echoed through generations.

“I feel like hip hop and shamanism in their pure forms are pretty much the same thing,” he says. “You have DJs as alchemists; graffiti artists—well, the first rite of Neolithic man was to paint the walls of their cave; B-boys and B-girls as yogis; the MC, or master of ceremony as the secular prophet—moving and transforming with their voice.”

Marv merges lyrical hooks with abstract effects (he creates his own audio foley, using a sampler); his sound is hypnotic, frequently amusing, and often unsettling—he is fearless in his approach, and wryly frank about his misadventures (it’s hard to believe that the dynamic figure onstage has previously fractured his spine and shattered his foot—the former injury resulting from a 9 metre fall from a mountain in Peru). In the multi-disciplinary performance of Hip Hop Palace, he presents the voice as a tool of self-care, liberation and unity for individuals categorized as “minorities”. There is fluidity and audience interaction throughout; beatboxing essentially involves improvization, and Marv’s work is designed to resonate with anyone around him.

The spirit of his performance also extends to his work as a sound therapist; in 2017, he worked with a group of throat cancer survivors who’d had their voiceboxes surgically removed, teaching them to beatbox and find empowerment through sound. He continues to work with an array of groups and individuals, from music festivals to stand-alone projects.

“I’ve learned about how my voice is my greatest healing tool—and realized how many people feel that they can’t even open their mouths let alone sing into their sadness,” he says. “It’s incredible, when you meet someone who says that their brain never stops—then, when they experience a ‘sound bath’ [an immersive soundscape using voice and instruments], they’ll switch off from the pressure, and feel this powerful peace. It’s all about vibrations and Hz—and how they feel when they resonate through people and material.”

On 7 November at Rich Mix London 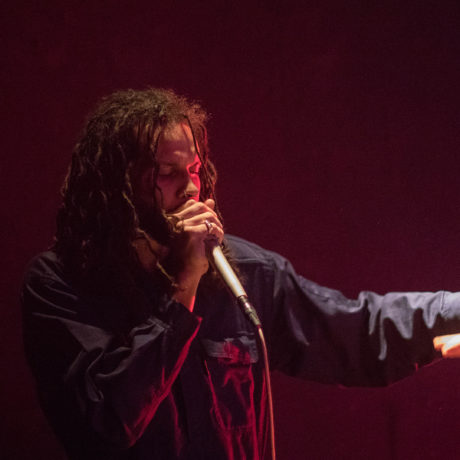