Within minutes of starting her live set in a fancy club near London’s Piccadilly,  Shingai Shoniwa is tearing down the roof. The elegantly bold London singer-songwriter (and former Noisettes frontwoman/bassist) is launching her debut solo EP, Ancient Futures: a collection that whole-heartedly embraces pan-African roots to soundsystem culture and electronica. When she sings the lead single Coming Home, the clued-up clubbers in the room whoop and holler along to its refrain taken from the classic track Shumba by legendary musician Thomas Mapfumo, aka the Lion of Zimbabwe (who also happens to be Shoniwa’s uncle). By the time she drops the bass-heavy Champion Styles, she has gracefully scaled the posh club furnishings, and the audience is buzzing at her feet.

“Ancient Futures is about being unafraid to create your own unconstrained art form, by taking influences into a new space,” explains Shoniwa, when we catch up at a South London pub a few days later. The self-funded EP feels both like a homecoming and a declaration of intent. In the Noisettes (co-founded with fellow BRIT school student Dan Smith), Shoniwa earned international acclaim for sparky, spiky indie rock hits including 2009’s Don’t Upset the Rhythm (Go Baby Go), and smart riffs that were as likely to reference nineteenth-century French literature as African American rock’n’roll pioneer Sister Rosetta Tharpe. Outside of the group, she’d spent an early stint performing with burlesque club crew Lost Vagueness; she went on to collaborate in grand-scale projects like Africa Express (jamming alongside the likes of Senegalese star Baaba Maal and Paul McCartney in 2012) and the Afropunk festivals, and guesting on kids’ TV (she voices CBeebies series Abney & Teal). At the same time, she faced stifling restrictions from a mainstream industry always keen to take tips from multicultural talent, yet unwilling to credit that talent’s full spectrum.

“I wanted to blow people’s minds, and to inspire women,” she says. “The industry used to pit women against each other, and make us feel like there’s only room for one of us. I was told by one company: ‘We’ve got someone similar’… I’m a twin. It’s hurtful and depressing.”

Shoniwa is impulsively enthusiastic company, and she swiftly brightens again: “My music is also about how we harmonize our many selves, as people who were born and raised in the UK, but come from a wider culture—especially somewhere like London, where all the meeting points make for a really exciting melting-pot.”

She describes the sweetly melodic Coming Home as “a love song to heritage”; its dreamy video, shot in Zimbabwe, echoes that sentiment, and depicts the scale and beauty of its environment. Shoniwa recalls her first trip to visit family in Zimbabwe, aged six: “I just remember seeing so much space!” she exclaims. “My mum’s family were just about an hour outside of Harare, but it’s very green and fertile in Zimbabwe. People here might have a single-story perception of Zimbabwe, but when you go there, it’s very kind and free. I’d thought I was a cool kid, but nobody cared about my trainers; it was more: how fast can you run, and do you know the sweetest mango to pick? That’s when I realized I had zero skills—but after a while, you get into it, and you don’t wanna come home! I remember being given a goat to look after; I named her Shingai II!”

“The guitar music that’s come out of Zimbabwe, Congo, Bantu Southern Africa is really next level in terms of the interplay between instruments”

When Shingai was nine, her father sadly passed away, and she and her sister were sent to live with their grandmother in Malawi for a year. “When we came back to our London school, we smashed our eleven-plus exams—and our teacher said: ‘I thought they’d been in Africa?’,” she laughs. “Going to school in Malawi, you’re under a tree from six in the morning, it’s taken you an hour to get there, and it’s so hot that you don’t want to make any mistakes. Actually, as a result of that, we got into a better London school.”

Back in London, she also recalls a busy home full of musicians and artists. “I was born into a family where you were encouraged to be who you are; nobody wanted to copy each other, and there was a harmony between our identities,” she smiles. “My mum would hang out with a lot of creative people, and there were so many great artists like the Bhundu Boys (Harare “jit” music pioneers, who supported Madonna on tour in 1987) passing through our house. A lot of these artists were chewed up and spat out by the industry; now I recognize the sacrifices they made—and they made great music. The guitar music that’s come out of Zimbabwe, Congo, Bantu Southern Africa is really next level in terms of the interplay between instruments, and inspiration for a new wave of Western rock music.”

Shoniwa would merge pan-African influences into the Noisettes’ catchy mash-up of punk, funk, soul and rock. She points out a track called Iwe, from their 2007 debut album, What’s the Time, Mr Wolf? (“It was like a call to attention,” she says. “We made the video in my flat in Tulse Hill; I was living next door to Adele at the time”). She has always flaunted a brilliantly headstrong glamour, cutting her natural hair into a heart shape for the artwork of the Noisettes’ second album, Wild Young Hearts (2009). “Even having my hair natural was a subconscious ode to my culture,” she says. “Your hair being a blank canvas to express yourself—that’s very Bantu.”

The Noisettes played increasingly global live shows, including Malawi’s Lake of Stars festival, and in 2013, the Harare International Festival of the Arts, where they decided to cover Mapfumo’s Shumba: a roots song revived in 1980, when Zimbabwe became independent from British colonial rule.

“I love that Thomas Mapfumo used music to reunite people who’d been oppressed with a sense of pride about their own culture,” she enthuses. “Mbira [traditional thumb piano] music had been banned; he’d play these traditional rhythms on guitars, which at the time was super-modern. It reinvigorated the sense that in order to have a future, we’ve got to learn from the past.

“I wanted the sweetest, stickiest pop bangers, but also to work with people who have a really nuanced knowledge of music”

“At HIFA, we met with some of the most respected mbira players, Stella Chiweshe and Amira Kheir; it was a seeking of permission, and then we played Shumba, and people started storming the stage. It’s like trance music with homemade instruments; people get into a state of euphoria. A lot of modern dance forms, like drum’n’bass and dubstep, have African polyrhythms to thank.”

On Ancient Futures, Shoniwa celebrates mbira alongside clubby meltdowns, on tracks such as the slinky Revolutions (which also unexpectedly evokes the Art of Noise’s ambient classic Moments in Love) and the multi-layered Zimtron (“It’s Zimbabwean vibes in a futuristic way… it feels like you’re cascading across dimensions”). It’s an independent expression, but definitely not an insular one, as Shoniwa enlists kindred spirits including Martin, Dave Okumu (The Invisible) and Ninja Tune producers Roseau and Gadi Sassoon.

“I wanted the sweetest, stickiest pop bangers, but also to work with people who have a really nuanced knowledge of music,” she says. The time feels particularly ripe for these diaspora expressions—not merely because of mainstream flirtations with “afrobeats” and pan-African visual art, because of a new-gen awakening of artists referencing their personal roots, and the sense that mainstream gatekeepers don’t wield quite the same power in the digital age.

“Growing up, my friends and I would listen to Nigerian legends like Fela Kuti—but you’d never catch Fela’s music on the television or radio, maybe because the messages were quite radical,” she says. “And if you talked about having Zimbabwean heritage, you’d almost expect this dreaded look of pity, or the assumption that conflict defines your identity. Now with the Internet, there’s definitely a renaissance; the pride never left us—and our stories should be told.”

Ancient Futures by Shingai Shoniwa is out now 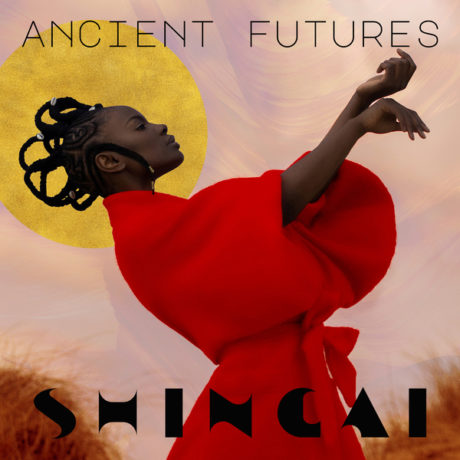